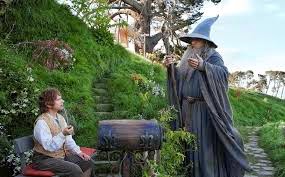 Distributism in the Shire: The Political Kinship of Tolkien & Belloc


In a very interesting interview in Catholic World Reporton October 30, Jay W. Richards, co-author of The Hobbit Party, a new book examining the political thought of J. R. R. Tolkien, sought to distance Tolkien from the political views of G. K. Chesterton and Hilaire Belloc. Whilst paying lip service to the romantic aspirations of distributism, the political creed advocated by Belloc and Chesterton, Richards suggests that the devil is in the practical details of distributism:

The difficulty, we think, is that Belloc in particular didn’t simply offer an appealing ideal. He proposed some very specific policies to bring about a distributist society, and he did so with economic ideas that we think were in some ways mistaken. For instance, in hisEssay on the Restoration of Property, Belloc wrote that “the effort at restoring property will certainly fail if it is hampered by a superstition against the use of force as the handmaid of Justice.” In contrast, in “The Scouring of the Shire,” Tolkien describes a group of bossy outsiders who have infiltrated the Shire, “gatherers and sharers . . . going around counting and measuring and taking off to storage,” supposedly “for fair distribution.” It’s not a complimentary picture. Given Tolkien’s views about the use of coercive power to achieve presumably laudable goals, it’s hard to imagine him signing off on the details of Belloc’s program.

....
We have to dig beneath the incoherent surface to understand what Richards is trying to say. His argument is not with the use of force per se but with the use of economic force. As an adherent to the nonsensical creed of the free market libertine, Richards advocates the legitimacy of using force of arms to restore property taken unjustly but not the force of law. It is legitimate to kill people and to drop bombs in order to restore property to its rightful owners but it is not legitimate to enact laws to do so.
Belloc advocates legal intervention to restore justice in the economy, such as, for instance, proactive measures to assist small businesses to gain and retain a place in the marketplace in the face of efforts by large corporations to exclude them from it. Richards makes the all too common and naive mistake of equating Belloc’s political philosophy with that of socialism and then, having done so, states, quite correctly, that Tolkien was not a socialist. The fact is that Belloc opposed the way in which both socialism and globalist capitalism concentrate property into the hands of a privileged few, i.e. politicians and plutocrats. The answer to this injustice was to promote small businesses and to use the power of politics to do so. Such political intervention is not liked by free market libertarians who seem to believe that it’s better to have the world run by global corporations who have free rein (and reign) to use and abuse their economies of scale to monopolize control of the market.
Richards’ reasoning is simple and simplistic. He begins by demonstrating that Tolkien disapproves of socialism, the “gatherers and sharers … going around counting and measuring and taking off to storage,” supposedly “for fair distribution.” He then suggests that Belloc’s advocacy of distributism is itself socialist, even though Belloc always vehemently attacked socialism. The problem seems to be that Richards does not make the essential and crucial distinction between socialist “redistribution of wealth” and the restoration of widely distributed private property which the distributists advocate. Whereas socialists believe that private property is bad and that it should be controlled by the state, distributists believe that private property is good and that it should therefore be restored to as many people as possible as a defence against the power of the state. It is simply incorrect to equate or conflate these diametrically opposed philosophies.
It is also curious that Richards is keen to quote Tolkien’s opposition to socialism but neglects to mention his graphic depiction, a few pages later, of the ravages inflicted by the laissez faire capitalism of the industrial revolution:

It was one of the saddest hours in their lives. The great chimney rose up before them; and as they drew near the old village across the Water, through rows of new mean houses along each side of the road, they saw the new mill in all its frowning and dirty ugliness: a great brick building straddling the stream, which it fouled with a streaming and stinking outflow. All along the Bywater Road every tree had been felled.
As they crossed the bridge and looked up the Hill they gasped. Even Sam’s vision in the Mirror had not prepared him for what they saw. The Old Grange on the west side had been knocked down, and its place taken by rows of tarred sheds. All the chestnuts were gone. The banks and hedgerows were broken. Great wagons were standing in disorder in a field beaten bare of grass. Bagshot Row was a yawning sand and gravel quarry. Bag End up beyond could not be seen for a clutter of large huts.

As a boy, Tolkien had lived in the “rows of new mean houses along each side of the road”, i.e. the slums, of industrialized Birmingham, which, as the second largest city in England...
And as for the necessity of the so-called “force” of economic intervention to restore productive property to those who have been dispossessed by the onslaught of laissez faire, Tolkien would have agreed with Chesterton. “The foundation of the true doctrine of progress is that all things tend to get worse,” wrote Chesterton. “Man must perpetually interfere to resist a natural degeneration; if man does not reform a thing Nature will deform it. He must always be altering the thing even in order to keep it the same.” Chesterton used the example of a gatepost to illustrate this point, stating that we cannot preserve a gatepost by leaving it alone. If we leave it alone we will be leaving it to rot. If we wish to preserve the gatepost we have to be continually painting it. The sort of intervention that Belloc was advocating was of this sort. To conserve culture or property we must actively oppose those forces that seek to undermine it; to restore culture or property, once it is lost, we must be actively engaged in defeating those forces that have dispossessed us of it. Doing nothing, leaving things be, “laissez faire”, is not an option for the true conservative or distributist because it ensures the destruction of all that is worthy of conservation and restoration. It is in this context that we must understand Belloc’s advocacy of the use of force “as the handmaid of Justice,” It is also in this context that we must understand the hobbits’ use of force in achieving the restoration of property in the Shire.
It is true, as Dr. Richards maintains, that Tolkien never seems to have called his own political philosophy by the admittedly ugly name of “distributism”. It is equally true, however, that Shire economics and distributist economics are essentially synonymous. When all is said and done, economic sanity by any other name still smells as sweet!