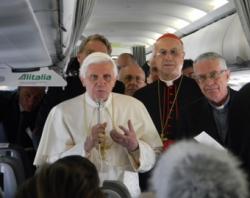 By David Kerr
Aboard the papal plane, Aug 18, 2011 / 12:07 pm (CNA/EWTN News).- Pope Benedict XVI used his flight to Madrid for World Youth Day to call for a new ethical code in global economics. Spain currently has the highest unemployment rate in the industrialized world, with nearly 50 percent of its young people unable to find work.
“The economy doesn’t function with market self-regulation but needs an ethical reason to work for mankind,” the Pope told reporters aboard the papal plane.
“Man must be at the center of the economy, and the economy cannot be measured only by maximization of profit but rather according to the common good.”

Pope Benedict drew upon his 2009 encyclical “Caritas in Veritate” or “Charity in Truth” in which he asserted that the dignity of the person must be central to all economic decisions.

He told reporters that the current economic crisis afflicting many young people in countries like Spain again shows that a moral dimension isn’t “exterior” but “interior and fundamental” to the formulation of economic policy.

Among the welcoming party at Madrid’s Barajas Airport were Spain’s Socialist Prime Minister Jose Luis Rodriguez Zapatero and his conservative opposition leader Marian Rajoy. With both men
listening, the Pope once again dwelt upon matters economic in his opening remarks.

“Many young people look worriedly to the future, as they search for work, either because they have lost their job or because the one they have is precarious or uncertain.”
It was a sentiment that echoed King Juan Carlos’ comments moment before. He said Spain’s youth are “frustrated by the lack of personal and work possibilities, and rebel against the serious problems facing the world today.”

Last night, around 5,000 individuals took to the streets of Madrid to protest, they said, against the cost of the papal visit to Spain. Police arrested eight of the demonstrators after groups of protesters started taunting and attacking young pilgrims.

Organizers of World Youth Day say the event is being fully paid for by the Catholic Church and pilgrims but not by the Spanish state. They also point out the economic boost that a million or more visitors to Madrid are giving to Spain’s ailing economy.
Postado por Pedro Erik Carneiro às 19:46