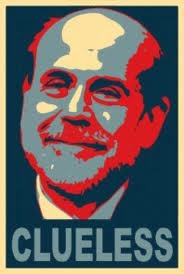 Bernanke says Fed could have done more during crisis

By Martin Dokoupil, Stanley Carvalho and Mirna Sleiman
(Reuters) - Former Federal Reserve Chairman Ben Bernanke said the U.S. central bank could have done more to fight the country's financial crisis and that he struggled to find the right way to communicate with markets.

"We could have done some things on the margin to mitigate somewhat the crisis," Bernanke, 60, said on Tuesday in his first public speaking engagement since he stepped down in January after eight years heading the Fed.

"Although we have been very aggressive, I think on the monetary policy front we could have been even more aggressive."

Bernanke said he could now speak more freely about the crisis than he could while at the Fed - "I can say whatever I want" - and in remarks to over 1,000 bankers and financial professionals in the capital of the United Arab Emirates, he made clear that he had regrets.

The United States became "overconfident", he said of the period before the September 2008 collapse of U.S. investment bank Lehman Brothers. That triggered a crash from which parts of the world, including the U.S. economy, have not fully recovered.

"This is going to sound very obvious but the first thing we learned is that the U.S. is not invulnerable to financial crises," Bernanke said.

As the Fed provided tens of billions of dollars of emergency aid to the U.S. financial system, Bernanke said he felt the central bank was in a "terrible" political situation because it could be accused of bailing out institutions unfairly.

He also said he found it hard to find the right way to communicate with investors when every word was closely scrutinised.

"That was actually very hard for me to get adjusted to that situation where your words have such effect. I came from the academic background and I was used to making hypothetical examples and ... I learned I can't do that because the markets do not understand hypotheticals."

He concluded that he should "try to simplify the message, but not simplify too much".

Ultimately, Bernanke said, he wished the U.S. economy could have recovered faster but "we did good in a very complicated situation and in a very complex political situation, and the result is what it is."

REMUNERATION
Bernanke received at least $250,000 for his appearance at the financial conference staged by National Bank of Abu Dhabi NBAD.AD, the UAE's largest bank, according to sources familiar the matter. NBAD did not announce the fee.

Bernanke's speaking fee is similar to one received by his predecessor Alan Greenspan for an Abu Dhabi speaking engagement in 2008, the sources said.

Greenspan embarked on a series of lucrative speeches after he stepped down, and Bernanke now appears to be doing the same. He is scheduled to speak at an event in South Africa on Wednesday and in Houston on Friday.

Another former heavyweight in U.S. economic policy, ex-Treasury Secretary Lawrence Summers, spoke at the Abu Dhabi event and criticised some aspects of Fed policy under Bernanke, although he acknowledged that policy needed to be expansionary.

Ultra-loose monetary policy, known as quantitative easing, has diminished returns in the economy and there is concern about the way the impact of low interest rates is being transmitted through the economy, Summers said.

Bernanke, looking relaxed in a grey suit and tie, said that after stepping down, he would write more about his experiences in the crisis to explain his side of the story. "For the future, I'm in a mode of reflection."