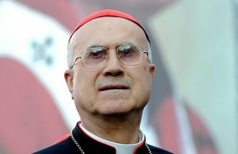 Too Much Confusion. Bertone Puts the Curia Under Lock and Key

The document of "Iustitia et Pax" on the global financial crisis is blasted with criticism. The secretary of state disowns it. "L'Osservatore Romano" tears it to shreds. From now on, any new Vatican text will have to be authorized in advance by the cardinal.
by Sandro Magister

ROME, November 10, 2011 – Precisely when the G20 summit in Cannes was coming to its weak and uncertain conclusion, on that same Friday, November 4 at the Vatican, a smaller summit convened in the secretariat of state was doing damage control on the latest of many moments of confusion in the Roman curia.

In the hot seat was the document on the global financial crisis released ten days earlier by the pontifical council for justice and peace. A document that had disturbed many, inside and outside of the Vatican.

The secretary of state, Cardinal Tarcisio Bertone, complained that he had not known about it until the last moment. And precisely for this reason he had called that meeting in the secretariat of state.

The conclusion of the summit was that this binding order would be transmitted to all of the offices of the curia: from that point on, nothing in writing would be released unless it had been inspected and authorized by the secretariat of state.

Of course, the fact that Bertone and his colleagues had seen that document only after its publication is astonishing in itself.

Already on October 19, in fact, five days ahead of time, the Vatican press office – which reports directly to the secretary of state – had made the announcement of the press conference to present the document, at which the speakers would be Cardinal Peter Kodwo Appiah Turkson, president of the pontifical council for justice and peace, and Bishop Mario Toso, the council's secretary.

Toso, a Salesian like Bertone and his longtime friend, was chosen for this office by the cardinal secretary of state himself.

As for the text of the document, the Vatican press office had given notice that it was already available in four languages, and would be distributed to accredited journalists three hours before it was made public.

On October 22, a further notification added the name of Professor Leonardo Becchetti to the ticket of the presenters.

Becchetti, a professor of economics at the University of Rome Tor Vergata and an expert on microcredit and fair trade, is believed to have been the main architect of the document.

And in fact, at the press conference presenting the document on October 24, his remarks were the most specific, centered in particular on calling for the introduction of a tax on financial transactions, called a "Tobin tax" after the name of its creator, or a "Robin Hood tax."

At the G20 summit in Cannes, the idea of this tax popped up in some of the comments of Barack Obama and Nicholas Sarkozy, but nothing concrete was done about it.

Another assertion of the Vatican document, according to which the economy of Europe is in danger of inflation rather than deflation, was contradicted on November 1 by the decision of the new governor of the European Central Bank, Mario Draghi, who lowered the interest rate of the euro instead of raising it, as is always done when inflation is a real threat.

As for the main objective of the document, nothing less than a one world government of politics and the economy, this came out of the G20 in Cannes shredded to pieces. Not only did no one even speak vaguely of such a utopia, but the little that was decided in the concrete went in the opposite direction. The disorder in the world is now more severe than before, and has its most serious deficit in the increased the inability of European governments to guarantee "governance" of the continent.

It is little consolation for the Vatican document that it has been compared to the views of the "Occupy Wall Street" protesters. Or that it was echoed in a pugnacious  article by Anglican primate Rowan Williams in the "Financial Times" on November 2, in favor of the "Robin Hood tax."
Postado por Pedro Erik Carneiro às 10:30