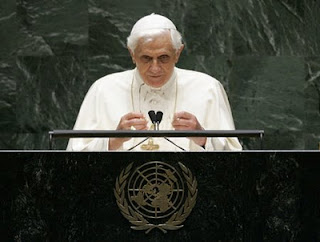 How to Understand Catholic Social Teaching: Solidarity and Subsidiarity

I've gotten questions in the past about how the Vatican views the international financial crisis, as well as what Catholics should think about a variety of economic and social issues.  I think that in addressing any of these questions, there are exactly two tools that we need to have at our disposal: solidarity and subsidiarity.  Both of them are aspects of the second great commandment, to love our neighbors as ourselves:

These are the two things that the Church teaches: solidarity and subsidiarity are very important.  At this point, we're largely in the realm of prudence.  Church leaders may suggest a solution to economic or political issues, but in almost every case, Catholics are free to disagree.  So if you understand these two principles, you're 90% of the way towards being able to formulate a Catholic response to any of the world's problems.  And these two principles help balance one another out, as Pope Benedict XVI explained in Caritas in Veritate:

In that encyclical, he did a good job of laying out the role of both solidarity and subsidiarity.  Solidarity helps civilize the market, so we don't have the brutal excess of the sweatshop and the plantation:
Solidarity is first and foremost a sense of responsibility on the part of everyone with regard to everyone, and it cannot therefore be merely delegated to the State. While in the past it was possible to argue that justice had to come first and gratuitousness could follow afterwards, as a complement, today it is clear that without gratuitousness, there can be no justice in the first place. What is needed, therefore, is a market that permits the free operation, in conditions of equal opportunity, of enterprises in pursuit of different institutional ends. Alongside profit-oriented private enterprise and the various types of public enterprise, there must be room for commercial entities based on mutualist principles and pursuing social ends to take root and express themselves. It is from their reciprocal encounter in the marketplace that one may expect hybrid forms of commercial behaviour to emerge, and hence an attentiveness to ways of civilizing the economy. Charity in truth, in this case, requires that shape and structure be given to those types of economic initiative which, without rejecting profit, aim at a higher goal than the mere logic of the exchange of equivalents, of profit as an end in itself.

One risk we can fall into is what Charles Dickens called “telescopic charity” (I’m indebted to Fr. Paul Scalia for this term). It's the idea that we're going to meddle in the affairs of complete strangers, while refusing to love our family or those people we see every day. He mentioned seeing it a lot among high-schoolers: they want to stop all the injustice in the world on a grand scale, but refuse to stop perpetrating injustices.  That's a cop out, and not the appropriate Christian solution.  It's even more of a cop out when we think that we can accomplish this charity simply by writing a check, or worse, by having the government write a check for us.
So note what Benedict said above, about how solidarity can't simply be delegated to the State.  That's critically important.  Yes, we have an obligation to love our neighbors around the country and across the globe.  But no, that's not an obligation that's met through your tax dollars. The federal government cannot love for you.  The State certainly has some role to play, but the assumption that only the State has a role to play isn't a Christian one.

Benedict's vision of the economy is refreshing, and I wish more politicians here and abroad would take these words to heart.  A free market is a good, but a truly free market should make it possible for individuals and businesses to work for profit, or work for the good of others.  I think that tax-exempt charitable organizations are one helpful way in which the State facilitates charity without getting too much in the way (but even here, only if the tax-exemption doesn't come with a lot of strings attached that destroy the independence of the charity).

About subsidiarity, which he called “an expression of inalienable human freedom,”  Pope Benedict has this to say:

Subsidiarity respects personal dignity by recognizing in the person a subject who is always capable of giving something to others. By considering reciprocity as the heart of what it is to be a human being, subsidiarity is the most effective antidote against any form of all-encompassing welfare state. It is able to take account both of the manifold articulation of plans — and therefore of the plurality of subjects — as well as the coordination of those plans.


So for example, you've got a friend who loses his job.  If the State takes care of him, he's treated impersonally, and he's at the risk of being treated as a helpless victim.  In contrast, if you and your other friends (or perhaps your local parish) help take care of him, it's personal and loving.  Plus, you're treating him as a friend with inherent dignity, not simply a victim.  Maybe your generosity will encourage him to help contribute in some way in return (either to you or others), something he's unlikely to have done in response to the welfare state.  That is, the more personal approach is the one more likely to cultivate respect and charity.

Benedict then remarks on the role that subsidiary plays in globalization, while emphasizing the role for international authority as well:


Hence the principle of subsidiarity is particularly well-suited to managing globalization and directing it towards authentic human development. In order not to produce a dangerous universal power of a tyrannical nature, the governance of globalization must be marked by subsidiarity, articulated into several layers and involving different levels that can work together. Globalization certainly requires authority, insofar as it poses the problem of a global common good that needs to be pursued. This authority, however, must be organized in a subsidiary and stratified way, if it is not to infringe upon freedom and if it is to yield effective results in practice.

So the pope is endorsing some degree of international authority for regulating globalization, while emphasizing that we don't want a tyrannical world government.  We want as local a solution as is possible: it just happens that for certain things in international relations, the most local solution possible is international.
o what does this authority look like?  We've seen it manifested in multilateral treaties in the past.  For example, the 1912 International Opium Convention was an agreement in which 13 major nations agreed to outlaw opium.  It helped regulate an international problem (the drug trade) in a way that wouldn't have been as effective done more locally (as China discovered, when it tried to unilaterally outlaw opium).  So when we read this, it's easy to conjure up visions of a UN world-government, but that's not what's being talked about.

Finally, there is a healthy debate over whether the role played by the World Trade Organization, International Monetary Fund, World Bank, and the rest are helpful.  Should they exist?  Should they be reformed?  If they continue to exist, what should their institutional goals be, and what means should they use to achieve these goals?  These, and all of the related questions, are prudential.  Once you understand the importance of subsidiarity and solidarity, and are motivated by a true love of neighbor, it's largely up to you to decide how you think these things should best be handled.