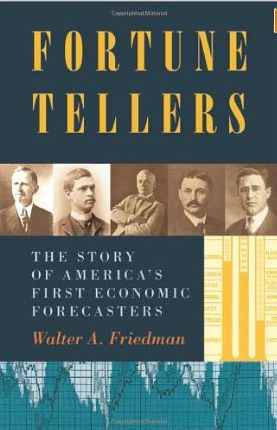 There are few things more terrifying than randomness, whether in the realm of mortality, meteorology or markets. Our best-laid plans fall prey to unpredictable heart attacks, tornadoes and popping bubbles in asset prices. So it is not surprising that profitable business opportunities lie in claims to reduce randomness and replace it with a sense of predictability and order. With some combination of eating our greens, weather forecasts and investment advice, we hope to know what tomorrow holds.

In Fortune Tellers, Walter Friedman, director of the Business History Initiative at Harvard Business School, brings to life the men who first created businesses based on the idea that people will pay to reduce randomness in economic life. Working in the early decades of the 20th century, each claimed to be able to find order and predictability in chaos, and each has an intellectual legacy that is visible today.

Roger Babson was a pioneer in technical analysis, a forecasting approach that seeks patterns in weather-type charts of asset prices. Irving Fisher, by contrast, saw the economy as a mechanical affair, and believed that its behaviour could be predicted through the study of money and prices. John Moody founded what would become one of the world’s largest financial information concerns, and was perhaps the first proponent of fundamental analyses, or the notion that reams of data on individual companies could predict future performance. Charles Bullock and Warren Persons built the first data-based macroeconomic models, which later evolved into widely used leading and lagging indicators.

As intellectual and business history, Fortune Tellers succeeds admirably. Friedman marshals sources of all kinds to compile detailed histories of each business: its customers, marketing strategies, business models and employees. At the same time, he is a captivating guide to the intellectual landscape, illuminating the development of the methods and ideas behind early forecasting, and comparing and contrasting the embedded assumptions of the different approaches.

The men themselves, however, are less fully formed, and appear to be portfolios of quirks rather than people we come to know. And what we do know is not terribly likeable or even interesting: they are petty in their rivalries, and prone to distasteful beliefs and strange causes such as eugenics and “calendar reform” (a movement to deal with the failure of the moon to line up neatly with months and years). The businesses and ideas are compelling reading; the characters and their personal lives, less so.

Although these pioneers left us much that is of lasting value, their records as forecasters were decidedly mediocre. None of the new ideas – the charts, the dividend forecasts, the leading indicators – worked very well in predicting the economic future; even today, macroeconomic forecasting models earn a gentleman’s C at best. Skill in predicting the worst macroeconomic outcomes – crashes and sustained slumps – appears not to have progressed at all between the crashes of 1929 and 2008. Yet forecasters continue to sell predictions about tomorrow and investors continue to buy them.

Each of the men profiled in Fortune Tellers has nothing if not hubris; such overconfidence was not new then, nor is it obsolete now. It has even generated an academic literature of late, with studies finding that “high-hubris” individuals are more likely to overpay for acquisitions or commit fraud. Those who believe they have predictive power, in other words, tend to behave predictably.

There is a research group that boasts of using 2,000 variables and 1,500 equations to make 30-year (!) forecasts of US economic performance. A television talking head looks us in the eye and says things like, “We’re going to see 7.7 per cent growth in China next year.” A billion-plus people, an opaque government, swings in commodity prices, employment, birth rates, interest rates and weather – and they’ve figured it out to a tenth of a per cent? It’s a marvel, really, this hubris thing. It is also, the research shows, a mostly male thing. Just sayin’.

But Fortune Tellers is a marvel too. It is scholarship of the highest quality, without shortcuts or gimmicks. We may not be able to trust the forecasters, but when it comes to their stories we are in excellent hands.