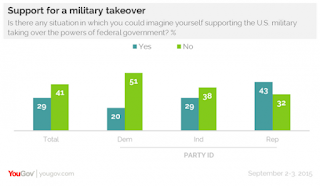 1 In 3 Americans Would Support A Military Coup... In America

One topic that seems to be of great concern to a relatively large swath of the US public is the militarization of American cities.
Indeed, with each passing “confrontation” between protesters and police, “protecting and serving” seems to look more and more like “subduing and controlling.”
The fear of military and police overreach came to a head this year in the lead up to the US Spec Ops Command’s multi-state “training exercise” dubbed Jade Helm 15. Thanks to a few viral internet campaigns and some badly-timed Wal-Mart closures, some US citizens came to believe that the federal government had devised a plan to institute martial law in Texas.
Be that as it may, if there’s anything Americans fear more than overt oppression enacted by force it’s covert oppression enacted by a nefarious combination of crony capitalism and corrupt (not to mention largely incompetent) politicians, which we suppose explains why nearly a third of Americans say they would support a military coup in the US. Here’s more from YouGov:

The United States military has long embraced the idea of civilian control of national affairs, and apart from certain rare moments the American officer corps has faithfully followed the orders of their civilian superiors.

YouGov's latest research shows, however, that officers in the military are held in much greater esteem than their civilian superiors, and that they are widely viewed as having the best interests of the country in mind instead of their own selfish concerns. 70% of Americans believe that military officers generally want what is best for the country. When it comes to Congressmen, however, 71% of Americans believe that they want what is best for themselves, along with 59% for local politicians.

29% of Americans could imagine a situation in which they would support the military seizing control of the federal government, while 41% could not imagine such a situation.

We present that with no further comment other than to note that Abraham Wyner, director of the undergrad program in statistics at Wharton, suggests you remember that selection bias makes online polling "worse than just about any other way you can put together a poll."