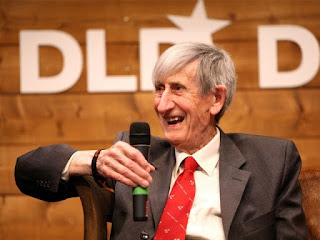 Top Physicist Freeman Dyson: Obama Has Picked The ‘Wrong Side’ On Climate Change
by James Delingpole


The climate models used by alarmist scientists to predict global warming are getting worse, not better; carbon dioxide does far more good than harm; and President Obama has backed the “wrong side” in the war on “climate change.”

So says one of the world’s greatest theoretical physicists, Dr Freeman Dyson (pictured above), the British-born, naturalised American citizen who worked at Princeton University as a contemporary of Einstein and has advised the US government on a wide range of scientific and technical issues.

In an interview with Andrew Orlowski of The Register, Dyson expressed his despair at the current scientific obsession with climate change which he says is “not a scientific mystery but a human mystery. How does it happen that a whole generation of scientific experts is blind to the obvious facts.”

This mystery, says Dyson, can only partly be explained in terms of follow the money. Also to blame, he believes, is a kind of collective yearning for apocalyptic doom.


It is true that there’s a large community of people who make their money by scaring the public, so money is certainly involved to some extent, but I don’t think that’s the full explanation.

It’s like a hundred years ago, before World War I, there was this insane craving for doom, which in a way, helped cause World War I. People like the poet Rupert Brooke were glorifying war as an escape from the dullness of modern life. [There was] the feeling we’d gone soft and degenerate, and war would be good for us all. That was in the air leading up to World War I, and in some ways it’s in the air today.

Dyson, himself a longstanding Democrat voter, is especially disappointed by his chosen party’s unscientific stance on the climate change issue.


It’s very sad that in this country, political opinion parted [people’s views on climate change]. I’m 100 per cent Democrat myself, and I like Obama. But he took the wrong side on this issue, and the Republicans took the right side.

Part of the problem, he says, is the Democrats’ conflation of “pollution” (a genuine problem) with “climate change” (a natural phenomenon quite beyond mankind’s ability to control).


China and India rely on coal to keep growing, so they’ll clearly be burning coal in huge amounts. They need that to get rich. Whatever the rest of the world agrees to, China and India will continue to burn coal, so the discussion is quite pointless.

At the same time, coal is very unpleasant stuff, and there are problems with coal quite apart from climate. I remember in England when we burned coal, everything was filthy. It was really bad, and that’s the way it is now in China, but you can clean that up as we did in England. It takes a certain amount of political willpower, and that takes time.

Pollution is quite separate to the climate problem: one can be solved, and the other cannot, and the public doesn’t understand that.

The short-to-medium term solution to the pollution problem, he argues, is the replacement of coal with much-maligned shale gas, whose rejection by much of Europe he finds unfathomable and counter-productive.


As far as the next 50 years are concerned, there are two main forces of energy, which are coal and shale gas. Emissions have been going down in the US while they’ve going up in Europe, and that’s because of shale gas. It’s only half the carbon dioxide emissions of coal. China may in fact be able to develop shale gas on a big scale and that means they burn a lot less coal.

It seems complete madness to prohibit shale gas. You wondered if climate change is an Anglophone preoccupation. Well, France is even more dogmatic than Britain about shale gas!

Dyson, 91, has enjoyed a long, distinguished career as a physicist, mathematician and public intellectual, showing promise as early as the age of five when he calculated the number of atoms in the sun.  During World War II, he worked at the Operation Research Section of the Royal Air Force’s Bomber Command, before moving to the US where Robert Oppenheimer awarded him a permanent post at the Institute for Advanced Study at Princeton. He also worked at Oak Ridge National Laboratory, looking at the climate system 25 years ago, before it became a hot political issue.

The dangers of carbon dioxide, he believes, have been much overrated. In a foreword to a report for The Global Warming Policy Foundation by Indur Goklany called Carbon Dioxide: The Good News, – as reported here at Breitbart – he says:

I consider myself an unprejudiced person and to me these facts are obvious. But the same facts are not obvious to the majority of scientists and politicians who consider carbon dioxide to be evil and dangerous. The people who are supposed to be experts and who claim to understand the science are precisely the people who are blind to the evidence.

He likens the “climate change” issue to some of the other “irrational beliefs” promoted through history “by famous thinkers and adopted by loyal disciples.”


Sometimes, as in the use of bleeding as a treatment for various diseases, irrational belief did harm to a large number of human victims. George Washington was one of the victims. Other irrational beliefs, such as the phlogiston theory of burning or the Aristotelian cosmology of circular celestial motions, only did harm by delaying the careful examination of nature. In all these cases, we see a community of people happily united in a false belief that brought leaders and followers together. Anyone who questioned the prevailing belief would upset the peace of the community.

Dyson’s refusal ever to accommodate himself with the modish notions of the hour may explain why, unlike some of his less distinguished and brilliant contemporaries over the years, he has never been awarded a Nobel Prize.


“I am hoping that the scientists and politicians who have been blindly demonizing carbon dioxide for 37 years will one day open their eyes and look at the evidence.”