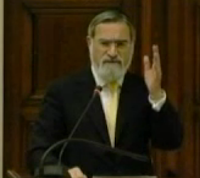 As the political leaders of Europe come together to try to save the euro, and with it the very project of European Union, I believe the time has come for religious leaders to do likewise, and I want to explain why.

What I hope to show in this lecture, is first, the religious roots of the market economy and of democratic capitalism. They were produced by a culture saturated in the values of the Judaeo-Christian heritage, and market economics was originally intended to advance those values.

Second, the market never reaches stable equilibrium. Instead the market itself tends to undermine the very values that gave rise to it in the first place through the process of “creative destruction.”

Third, the future health of Europe, politically, economically and culturally, has a spiritual dimension. Lose that and we will lose much else besides. To paraphrase a famous Christian text: what will it profit Europe if it gains the whole world yet loses its soul? Europe is in danger of losing its soul.

I want to preface my remarks by thanking His Eminence Cardinal Koch for not only inviting me to deliver this lecture, but being so graciously helpful throughout my trip and private audience with His Holiness.

I want to begin by saying a word about the relationship between the Vatican and the Jewish people.
The history of the relationship between the Catholic Church and the Jews was not always a happy or an easy one. Too often it was written in tears. Yet something extraordinary happened just over half a century ago, when on 13 June 1960 the French Jewish historian Jules Isaac had an audience with Pope John XXIII and presented him with a dossier of materials he had been gathering on the history of Christian antisemitism. That set in motion the long journey to Vatican II and Nostra Aetate, as a result of which, today, Jews and Catholics meet not as enemies, nor as strangers, but as cherished and respected friends.

I hope that this visit, this morning’s audience with His Holiness, and this lecture might in some small way mark the beginning of a new chapter in our relationship. For half a century Jews and Christians have focused on the way of dialogue that I call face-to-face. The time has come to move on to a new phase, the way of partnership that I call side-by-side.

If Europe loses the Judaeo-Christian heritage that gave it its historic identity and its greatest achievements in literature, art, music, education, politics, and as we will see, economics, it will lose its identity and its greatness, not immediately, but before this century reaches its end.

That is by way of introduction. Let me begin with a striking passage from Niall Ferguson’s recent book, Civilisation. In it he tells of how the Chinese Academy of Social Sciences was given the task of discovering how the West, having lagged behind China for centuries, eventually overtook it and established itself in a position of world pre-eminence. At first, said the scholar, we thought it was because you had more powerful guns than we had. Then we concluded it was because you had the best political system. Then we realised it was your economic system. “But in the past 20 years, we have realised that the heart of your culture is your religion: Christianity. That is why the West has been so powerful. The Christian moral foundation of social and cultural life was what made possible the emergence of capitalism and then the successful transition to democratic politics. We don’t have any doubt about this.”

The Chinese scholar was right. The same line of reasoning was followed by the Harvard economic historian, David Landes, in his magisterial The Wealth and Poverty of Nations. He too pointed out that China was technologically far in advance of the West until the 15th century. The Chinese had invented the wheelbarrow, the compass, paper, printing, gunpowder, porcelain, spinning machines for weaving textiles and blast furnaces for producing iron. Yet they never developed a market economy, the rise of science, an industrial revolution or sustained economic growth. Landes too concludes that it was the Judeo-Christian heritage that the West had and China lacked.

Admittedly the phrase “Judeo-Christian tradition” is a recent coinage and one that elides significant differences between the two religions and the various strands within each. Different scholars have taken diverse tracks in tracing the economic history of the West. Max Weber famously spoke about The Protestant Ethic and the Spirit of Capitalism, with special emphasis on Calvinism. Michael Novak has written eloquently about the Catholic ethic. Rodney Stark has pointed out how the financial instruments that made capitalism possible were developed in the fourteenth century banks in pre-Reformation Florence, Pisa, Genoa and Venice.