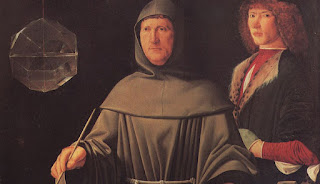 Consider some headlines from the past week. China announced its gross domestic product had slowed to a three-year low of 7.6 percent in the latest quarter. The International Monetary Fund cut its global growth forecasts to 3.9 percent for 2013. And Citigroup Inc. announced its net income was down 12 percent.
The system that generates these 21st-century accounting figures -- the numbers that run our nations and corporations -- was first codified by a Renaissance friar named Fra Luca Bartolomeo de Pacioli. He was at one time more famous, as a mathematician, than his collaborator Leonardo da Vinci.
Pacioli is remembered today, if he’s remembered at all, as the father of accounting. He wrote the first mathematical encyclopedia of Europe, which made two critical contributions to modern science and commerce: It was the first printed book to explain Hindu-Arabic arithmetic and its offshoot, algebra, and it contained the first printed treatise on Italian accounting.
Algebra would underpin the Scientific Revolution; Italian accounting, the Industrial Revolution.

As his encyclopedia was going to press in Venice in 1494, Pacioli added a 27-page summary of a new form of accounting that had first emerged in Italy around 1300 and been perfected by the merchants of Venice. He called the addition a “special treatise which is much needed” to help merchants keep their accounts in an orderly way.
Known in the 15th century as accounting “alla Veneziana,” the system is now called double-entry bookkeeping and is standard practice throughout the world. In 1494, it was exceptional -- and in his treatise Pacioli recommended it above all others.
In their ledgers, Venetian merchants separated debits and credits, dividing them into two columns. As Pacioli wrote: “All the creditors must appear in the Ledger at the right-hand side, and all the debtors at the left. All entries made in the Ledger have to be double entries -- that is, if you make one creditor, you must make someone debtor.”
Pacioli’s system was revolutionary because it allowed merchants to calculate increases and decreases in their wealth, recorded in their capital account. In other words, it allowed them to determine that driver of capitalism: profit (or loss). Pacioli wrote that the purpose of every business was to make a lawful and reasonable profit, which could be tallied with Venetian bookkeeping. And thus the seed of capitalism was planted.
Because Pacioli used the recently invented printing press to record and disseminate Venetian double entry, the system swept across Europe during the next two centuries and then to the U.S.
By the 18th century, Italian bookkeeping had become so pervasive that it had spread beyond the realm of commerce and into culture. Daniel Defoe famously applied it in his 1719 novel “Robinson Crusoe” when the shipwrecked Crusoe uses double entry to assess his life, drawing up his “State of Affairs” and comparing “very impartially, like Debtor and Creditor, the Comforts I’d enjoyed, against the Miseries I suffered.”

Fittingly, it was in the economic heart of the Industrial Age -- Great Britain -- that Venetian bookkeeping came into its own. The rise of factories and the flourishing of the joint-stock company transformed double-entry bookkeeping into a brand new profession: accounting.
The huge amounts of capital expenditure required to build railways -- raised from private investors on stock exchanges and managed by joint-stock companies -- brought new issues of accounting and accountability. By the 1860s, accountants were legally required in Britain at every phase of a company’s life: at its formation, during its operation and at its liquidation.
Although financial statements had been an incidental product of a company’s bookkeeping in 1800, they had become its raison d’etre by 1900. Venetian bookkeeping proved to be the perfect mechanism for generating these financial statements. It could accurately record capital and income as required by law and investors, it could distinguish between private expenses and corporate costs, and it could produce data that helped evaluate past investment decisions.
Venetian double entry thus became essential to the modern corporation. In the 20th century, it became equally essential to the nation state. With the crash of the New York Stock Exchange in 1929, and the Great Depression that followed, the laissez-faire principles that had previously informed government approaches to economic affairs suddenly seemed insufficient. At sea in their response to the crisis, the administrations of Herbert Hoover and Franklin D. Roosevelt commissioned comprehensive estimates of the income of the U.S. to guide their policies.
Soon after Roosevelt succeeded Hoover as president and began the New Deal, the British economist John Maynard Keynes travelled to the U.S. to see the policies in action. In Washington, Keynes said: “Here, not in Moscow, is the economic laboratory of the world.”

This signified a momentous change in government practice, and in economic theory. If Roosevelt’s response to the Depression was the New Deal, then Keynes’s was his “theory of effective demand.” Published in 1936, it provided a theoretical basis for the measurement of national income, consumption, investment and savings.
Both Roosevelt’s program and Keynes’s theory entailed the creation of national accounting systems, a massive undertaking that was carried out using the principles of double-entry bookkeeping.
At Keynes’s instigation, the first British accounts were made during World War II. Following the war, national accounts were created in countries across Europe as part of the framework of the Marshall Plan. And under the aegis of the newly created United Nations, national accounts were subsequently adopted by almost every nation on Earth.
Today, we depend on the numbers generated by the accounts of nations and corporations to direct our governments, businesses and societies. And so it happened that a medieval Italian accounting system codified by a friar in 1494 now governs the global economy.
Postado por Pedro Erik Carneiro às 12:01