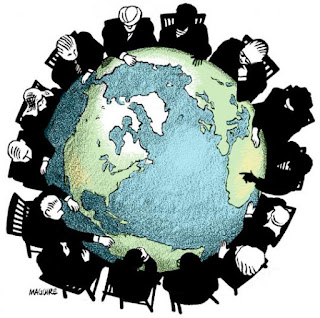 
...
Of the social encyclicals, probably Blessed Pope Paul VI’s Populorum Progressioaddressed it the most. He emphasized that the rule of free trade cannot govern international relations. To be sure, he could see its advantages. If economic power were equal, it would be “an incentive to progress and a reward for effort” (#58). It’s the same as competition and the market domestically: while competition is valuable it must “be kept within limits which make it just and moral, and therefore human” (#61). Prices supposedly set freely by the market—and he puts “freely” in quotes to underscore that market forces frequently don’t work in practice the way economic theory says—“can produce unfair results” (#58). These unfair results can have sad human consequences. As with the domestic economy, just because the parties have agreed to something, it doesn’t mean that it will be just. Pope Paul here was thinking of such things as unequal bargaining power and general conditions of sharp economic or wealth disparity among nations. This conjures up the notion of “liberty of contract” on the individual level. This governed American economic thinking and resulting constitutional jurisprudence in the period, roughly, from 1870 to 1937, and stymied many attempts to enact needed labor legislation. Somehow it was believed that the worker who had to accept a subsistence-level wage and pathetic working conditions—with no chance of employment otherwise—was acting “freely” in agreeing to an implicit contract an employer offered him. The law couldn’t “interfere” with his “choice,” despite the fact that the worker had no bargaining power at all. In other words, Pope Paul and all of the Church’s social teaching was saying that morality in economic matters, as in other realms of life, must not be fashioned by man—what is just and moral is not a mere human concoction. He also said that the consequence both domestically and internationally of making competition the sole ordering principle is that it “too often creates an economic dictatorship” (#59).
In the early twentieth century the economist Fr. Heinrich Pesch, S.J. developed solidarism or the solidaristic system of human work, a blueprint for an economic system built squarely on Catholic principles and the natural law. His writing influenced the shaping of the Church’s social teaching and it has been said that Pope Pius XI’s great encyclical, Quadragesimo Anno, promulgated five years after Pesch’s death, distinctly bore its imprint. Decades later, Pesch’s thought appeared to have influenced the Solidarity trade union movement in Poland that laid the groundwork for the collapse of eastern European communism. Pesch rejected a regimen of completely free trade, for the same reason that is echoed in Populorum Progressio: the problem of commutative justice—that some countries would not gain the same advantage from it as others. Indeed, some would be positively hurt, as when cheap foreign products flooded their markets and overwhelmed their domestic producers. This is part of the current problem in the U.S.: it’s more beneficial for companies’ bottom lines to import goods—and, increasingly, use services—produced by cheap labor overseas than to keep Americans employed.
So, Pesch asserts, there is no problem with some amount of protectionism. As he put it in his main work, the mammoth Lehrbuch der Nationalökonomie, the notion of an “international market” should be promoted, “but always in such a way that the national market will remain a strong first line of defense.” So nations rightly must take care of their own economic needs first. He also said that the trading policies of a nation have to be altered “as the requirements of the national welfare change, and as circumstances internally and externally vary.” He added that while no nation can go its own way, its “national autonomy,” rightly understood, must be preserved and it must be careful not “to sacrifice certain economic sectors” if that would go against its “best interests.” It hardly has to be stated that those interests would include something as basic as a nation’s need to keep its people employed. As Pesch bluntly says, “the national economy may not be sacrificed to the world economy in the name of free trade.”
By the way, if anyone thinks that in her concern about international charity and solidarity the Church insists that better-off nations have to ignore the needs of their own people in the interest of being international benefactors—more generally, that national interest has no place—he should note that Populorum Progressio (#48-49) says that they are obliged to contribute their “superfluous wealth” and “some of their production” (italics added) to poorer nations. We don’t have an obligation to suffer so Third World economies can develop. The meaning of all this for the U.S. is that there is nothing from the standpoint of Catholic social teaching that should make it feel embarrassed or reluctant to alter her current free-trade regimen to protect American jobs if that is what’s necessary to help the economic situation of the country. In light of what Pope Pius XII said about treaties in the usually forgotten encyclical Summa Pontificatus (#77), this should not be done unilaterally, but the U.S.—for the sake of keeping intact what he called the “mutual trust” among nations—should renegotiate provisions of agreements if they are the cause of certain of her current economic problems.
We have mentioned bodies like the Would Trade Organization. Some think it is part of the reason for U.S. trade problems, and additionally some are critical because having to follow its decrees compromises national sovereignty. Also, like most international organizations, it features all the usual discontents of bureaucracy. Recent popes have called for a reform of international economic institutions and of international organizations generally. While they have urged more international arrangements to deal with truly international problems, they have always called for respect for the principle of subsidiarity. In his social encyclical, Caritas in Veritate, Pope Benedict XVI said that subsidiarity was crucial for globalization—even in its economic dimension—not just to preserve freedom and avoid tyranny, but also for the sake of producing “effective results” (#57).