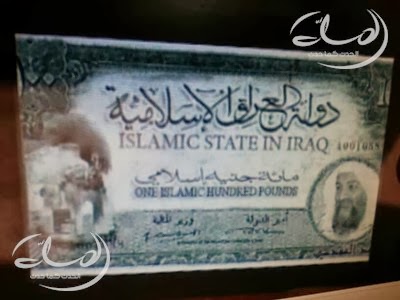 Vejam texto do The Blaze:

An Al Qaeda-linked group is issuing paper bills in western Iraq featuring images of Osama bin Laden and the World Trade Center towers that were destroyed in the September 11 attacks, according to local media reports.

A tribal leader in western Iraq’s Anbar Province showed the media a photo of one of the bills issued by the Islamic State of Iraq and the Levant (ISIL) printed in the amount of “one Islamic hundred pounds.” This photo was posted on several Arabic websites:

The Kurdish website PUKmedia quoted local official Hameed al-Hais who said the currency would not be recognized in Anbar and that anyone carrying the banknotes would be considered a member of ISIL which is fighting with the aim of establishing a Shariah law-compliant state in Iraq, Syria and beyond.

“The 100-guinea note bore the likeness of former Al Qaeda chief Osama bin Laden on one side, and the two World Trade Center towers attacked by the group on September 11, 2001 on the other,” PUKmedia reported.

Iran’s semi-official Fars News Agency reported that the currency — presumably intended to replace the Iraqi dinar — is being called the “ISIL dinar.” The paper bills bear the signatures of ISIL’s leader and finance minister, though their names are not typed out, Fars reported.

Sunni tribal chief Sheikh Ahmed Abu Risha who heads the Anbar Salvation Council presented the currency as evidence of the continuing presence of ISIL in Anbar and emphasized the need for Iraqi police and local tribes to join forces in the fight against terror.

Anbar has been the focal point of clashes between the Iraqi Army and the ISIL fighters. The Islamist militants and their allies captured Fallujah and parts of Ramadi in the restive province last month.