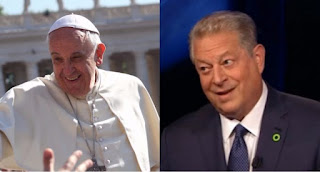 ROME — Pope Francis warned of disastrous consequences if humanity does not immediately react to the threat of climate change, since the world has reached a “critical moment” and there is no time to waste.

“Dear friends, time is running out!” the pope told a group of participants in a Vatican-sponsored conference on energy transition Friday. “We cannot afford the luxury of waiting for others to come forward or of prioritizing short-term economic benefits. The climate crisis requires decisive action from us, here and now.”
Despite the pontiff’s frequent denunciation of a “politics of fear,” he seemed determined to paint as frightening a picture as possible of an impending climate apocalypse in order to incite people to action.
This conference “takes place at a critical moment,” Francis said. “Today’s ecological crisis, especially climate change, threatens the very future of the human family, and this is not an exaggeration. For too long we have collectively ignored the fruits of scientific analysis, and catastrophic predictions can no longer be viewed with contempt and irony.”
The pope’s words Friday went beyond sounding a general alarm and scorning climate-change skeptics. They also urged specific political action, most notably regarding penalties for carbon usage such as a carbon tax.
“A carbon pricing policy is essential if humanity wants to use the resources of creation wisely,” he said. “The failure to manage carbon emissions has produced a huge debt that will now have to be repaid with interest from those who come after us.”
The cost of carbon usage must be paid here and now by those who use it, and not deferred for future generations to cover, he proposed.
“Our use of common environmental resources can be considered ethical only when the social and economic costs of their use are recognized in a transparent manner and are fully sustained by those who use them, rather than by other populations or future generations,” he said.
The pope reiterated the popular belief that “the effects on the climate will be catastrophic if we exceed the 1.5ºC threshold outlined in the Paris Agreement goals,” for which we have “only a little over a decade.”
“In the face of a climatic emergency, we must take appropriate measures, in order to avoid committing a grave injustice towards the poor and future generations. We must act responsibly well considering the impact of our actions in the short and long term,” he said.
“Future generations are soon to inherit a very ruined world,” the pontiff stressed. “Our children and grandchildren should not have to pay the cost of the irresponsibility of our generation.”
Appearing to take a page from AOC’s Green New Deal, Francis expressed his conviction that an energy transition from fossil fuels to a low-carbon society “can generate new employment opportunities, reduce inequality, and increase the quality of life for those affected by climate change.”
Today “a radical energy transition is needed to save our common home,” he warned. “There is still hope and the time remains to avoid the worst impacts of climate change, provided that there is prompt and resolute action.”