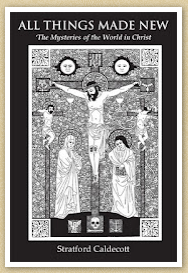 "You can check out any time you like, but you can never leave" (The Eagles). Juxtapose this quotation from one by Jesus – "everyone who commits sin is a slave" (John 8:34) – and you have a critique of liberalism and consumerism. Most people assume that the sheer freedom to do whatever they want, or buy whatever they want, renders them free. But if you can never actually "leave" (so that whenever you check out you find yourself back in the same hotel), and if you find it impossible to be virtuous and do the right thing (though you can do a million things that aren't right), you are still essentially a slave. Furthermore, you cannot free yourself, any more than you can open a locked door from the inside. To do that you would need to be outside the state in which you find yourself imprisoned. You need the jailor to come along. Jesus, of course, in the terms of this analogy, is the jailor who gets born into the prison (or hotel) along with you, and opens the door from the inside.

So much for the Christian critique of liberalism. Strange to find it echoed by the influential secular journal of the Royal Society of Arts. The latest issue contains a brief but important article by Adam Lent (director of the RSA's programme) titled "On Liberty". Since the RSA makes their journal freely available online, you can read it by following the link. Lent begins by pointing out a strange fact: "We fight wars in its defence. It is a defining feature of our societies. Many desire more of it. And yet freedom is a strangely unexamined ideal. Indeed, the notion that it might mean anything other than its current conceptualisation seems downright strange."

Lent then proceeds to disagree with the OED definition of freedom ("the power or right to act, speak or think as one wants") tracing this relatively recent definition back through Hobbes and Adam Smith, who successfully severed the link between personal virtue and the common good, making Hobbes's definition irresistible. But, Lent argues, "To see freedom as the pure exercise of will without external impediments ignores the fact that the nature of my motivations shapes how fully I make use of that freedom and, ultimately, whether it will prove sustainable." He continues: "To put it another way, older approaches regarded freedom as a practice for self-perfection, not, as we have come to understand it, a condition for self-satisfaction. If I am externally free but remain a slave to my internal constraints, then not only am I not fully free, but my external freedom will also prove unfulfilling and self-destructive. This outlook certainly seems relevant to our fraught times" - in fact, it helps to explain our current economic and political woes.

He ends by adducing insights from contemporary neuroscience in support of the traditional notion of freedom. These "reveal that the way internal conflicts are resolved by freeing some aspects of myself and suppressing others will have a fundamental effect on how I use and sustain my external freedoms. This is just as the older philosophers suspected." And he concludes: "So, maybe the time is right, in the midst of a crisis, to rethink our notion of freedom. As long as we continue to use precious external freedoms without a clearer understanding of which parts of our personality and behaviour should be nurtured and which contained, we risk degrading that which we value so much."

How can we "liberate the most beneficent aspects of ourselves"? I suspect the answer is more likely to be found in the great religious traditions than the corridors of the RSA, but this article, at least, puts the issue clearly. The economic crisis (which will continue to haunt us despite recent talk of "recovery") is at root a spiritual one.