(CNSNews.com) - “Mental disorder” is the leading “diagnostic group” for disabled people receiving federal disability insurance benefits, with 35.5 percent of all disabled beneficiaries having such a disorder, according to the latest Annual Statistical Report on the Social Security Disability Insurance Program.

The report provides a statistical profile of the 10,088,739 disabled beneficiaries who were receiving federal disability benefits as of December 2012. 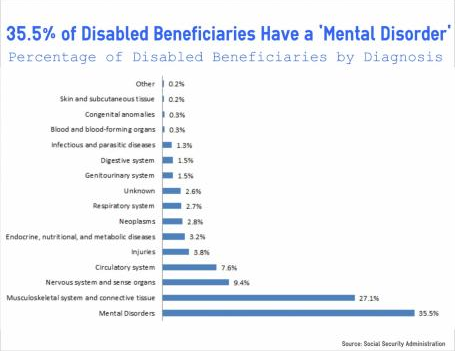 In Washington, D.C., according to the report, 43.2 percent of disabled beneficiaries as of December 2012 had been diagnosed with a mental disorder.

In Massachusetts--which led the nation in this metric--50.1 percent of disabled beneficiaries had been diagnosed with a mental disorder.

In Massachusetts--which led in this category also--22.7 percent of the disabled beneficiaries had been diagnosed with a mood disorder.

Washington, D.C., lagged slightly behind the national percentage, with 13.8 percent of its disabled beneficiaries having been diagnosed with a mood disorder.

As of December 2012, according to the report, there were 10,088,739 disabled beneficiaries receiving federal disability insurance benefits. These included 8,826,591 disabled workers; 1,006,676 disabled adult children; and 255,472 disabled widows and widowers.

“Individuals are considered to be disabled only if their physical or mental impairment(s) are of such severity that they are not only unable to do their previous work but cannot--because of their age, education, or work experience--engage in any other kind of substantial gainful activity (SGA) that exists in the national economy,” says SSA.

“If something happens to a worker,” says SSA, “benefits may be payable to their widow, widower or surviving divorced spouse with a disability if the following conditions are met: he or she is between ages 50 and 60, their condition meets the definition of disability for adults and the disability started before or within seven years of the workers death.”

“A disabled person aged 18 or older--a son, daughter, or eligible grandchild of a retired, deceased, or disabled worker – whose disability began before age 22” can also qualify for disability benefits, says SSA.
Of the 10,088,739 disabled people receiving federal disability benefits in December 2012, according to the report, 3,576,844—or 35.5 percent--were diagnosed with a mental disorder.

The second largest diagnostic group for disabled beneficiaries was “musculoskeletal system and connective tissue” problems.  Of the 10,088,739 disabled people receiving federal disability benefits in December 2012, 2,730,100—or 27.1 percent—had been diagnosed with a problem in this category.

A mood disorder, otherwise known as an affective disorder, says SSA, is: “Characterized by a disturbance of mood, accompanied by a full or partial manic or depressive syndrome. Mood refers to a prolonged emotion that colors the whole psychic life; it generally involves either depression or elation.”

To be determined to be suffering a disabling mood disorder, a person must exhibit a combination of multiple factors. These include such things as “appetite disturbance with change in weight; or sleep disturbance; or psychomotor agitation or retardation; or decreased energy; or feelings of guilt or worthlessness; or difficulty concentrating or thinking; or thoughts of suicide; or hallucinations, delusions, or paranoid thinking.”

The states in which the lowest percentages of local disabled beneficiaries have been diagnosed with a mood disorder include: 1) North Dakota, 9.0 percent; 2) Louisiana, 9.7 percent; 3) Montana, 9.9 percent; 4) South Dakota, 10.2 percent; 5) Georgia, 10.3 percent; 6) Alaska, 10.3 percent; 7) Wyoming, 10.6 percent; 8) North Carolina, 10.7 percent; 9) West Virginia, 10.9 percent; and 10) South Carolina, 11.0 percent.
In 1984, Congress made amendments to the disability program that according to a history of the program posted on the Social Security Administration’s website, increased the number of beneficiaries with “mental impairments.”

“Disability benefits could not be discontinued unless there had been medical improvement,  the beneficiary was capable of performing substantial gainful activity because of medical/vocational therapy or technology; or the initial determination was in error,” the SSA history says in explaining the 1984 amendments.

“The Secretary was required to revise the criteria under the Mental Disorders category in the Listing of Impairments used to make disability determinations, and SSA was prohibited from conducting continuing disability reviews in mental impairment cases until the revisions were published in a final regulation,” says the SSA history.

“One significant pattern that emerged following the 1984 Amendments involved beneficiaries with mental impairments,” says the history. “Changes in the medical listings had the effect of increasing this category of disability beneficiaries. The revised listings for mental impairments reduced the weight given to medical factors and put a greater weight on functional capacities, such as the applicant's ability to perform activities of daily living. They also required that evidence provided by the applicant's health care provider be considered first, before a consultative examination. Between 1985 and 1986, the proportion of awards for mental impairments increased from 18 percent to 30 percent of all awards, and has remained at approximately the same level ever since.”