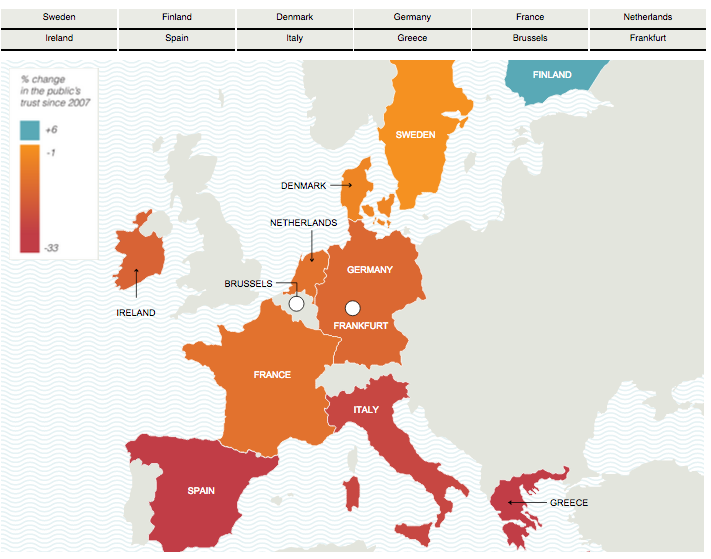 
How the European dream is dying, state by state

As the victory of the anti-austerity Syriza party in Greece shakes financial markets across Europe, find out how the EU project is slowly falling apart in the ten major member states and two cities which form its heart.

By Bruno Waterfield, graphics by Jack Kempster and Mark Oliver
24 Jan 2015
Europe is being swept by a wave of popular disenchantment and revolt against mainstream political parties and the European Union.
In 2007, a majority of Europeans - 52 per cent - trusted the EU. That level of trust has now fallen to a third.
Once, Britain's Euroscepticism was the exception, and was seen as the biggest threat to the future of the EU.
Now, other countries pose a far bigger danger thanks to the political discontents unleashed by the euro.
In Greece, a far-Left Socialist party, Syriza, has swept to power with a political programme that would overturn eurozone policies.
Many believe the Greek revolt against the loss of their economic sovereignty by eurozone diktat from Brussels or Frankfurt is only the beginning.
In France, Italy and Spain, voters are kicking against mainstream parties that they see as upholding EU institutions such as the euro while failing to represent their own people, the voters.
In Britain, the Netherlands, Sweden, and Denmark it is immigration that has become the touchstone for a popular sense that institutions do not represent the people.
Even in Germany the cracks in the European political order are beginning to show.
There are plenty of opportunities for revolt: parliamentary elections take place in Greece, Britain, Denmark, Estonia, Finland, Poland, Portugal and Spain. Early elections are also expected in Italy.
Postado por Pedro Erik Carneiro às 07:29