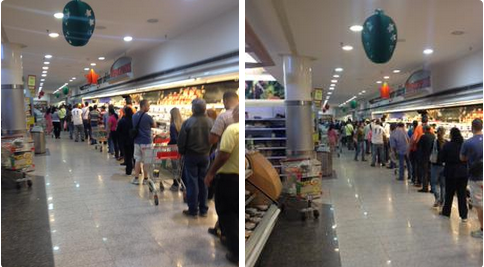 
Caracas (AFP) - Venezuelan President Nicolas Maduro begins a trip to China and OPEC member countries late Sunday in search of financial support as his country reels from falling oil prices and a tattered economy.
The South American oil giant confirmed Tuesday that it has entered recession, while annual inflation topped 63 percent, exacerbating the outlook for an economy already hit by global crashing oil prices and import shortages.
"It's a very important tour... to tackle new projects to address the circumstances affecting our country, including the depletion of revenues due to plummeting oil prices," Maduro said in a radio and television address from the Miraflores presidential palace.
Maduro said he would discuss economic, financial, energy, technological, educational and development projects with Chinese President Xi Jinping.
Maduro had been expected to announce exchange measures to address these issues. Instead, the president announced the creation of a strategic reserve, appointed a new board for the entity that manages currency exchange controls and created new agencies to control the distribution of commodities.
The price of Venezuelan oil has dropped more than 50 percent since June 2014, trading at $46.97 at the end of December.