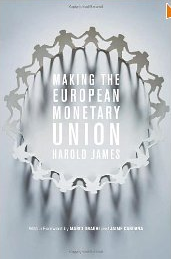 The euro was the product of more than a dozen committees and governmental bodies that met hundreds of times over a period of 40 years. Each involved representatives of as many as 12 European nation-states, many of which had met each other in battle not long before. A single currency wasn't the project's original objective, as Harold James notes in his meticulous account of their deliberations, and as Europe crept its way toward the introduction of the euro in 1999, policy makers' steely resolve to build a new continent ran up against their inability to get along. Reading "Making the European Monetary Union," it seems miraculous that anything came out of the process at all.

Mr. James, a historian at Princeton, begins with the 1957 creation of the European Economic Community (EEC), a customs union between six Western European states, and concludes with the 1992 Maastricht Treaty, which set the stage for a common currency. But the impetus for European monetary integration began earlier. Under the Bretton Woods system, created in 1944 as the basis of a postwar monetary order, participant countries were obliged to accumulate reserves to maintain a stable exchange rate against the U.S. dollar. Washington thus enjoyed the "exorbitant privilege," as French finance minister Valéry Giscard d'Estaing called it in 1965, of using monetary policy to stimulate its domestic economy while partner countries were forced to match the flood of dollars with monetary expansion of their own, in order to prevent speculative runs on their currencies.

At the same time, economic imbalances within Europe produced tensions among member countries. West Germany became an industrial power in the late 1950s and began to run persistent current-account surpluses. This forced its trading partners to apply fiscal brakes to defend the value of their currencies. Such measures were anathema in free-spending France—a rift that divides Europe still. Mr. James quotes Raymond Barre, the French vice president of the EEC Commission, advising Germany to take "energetic measures for speedier growth and the stimulation of imports." That was in 1968, but it could easily be today.

A series of crises in the EEC provoked experiments in integration. Inflation in the 1970s, after the Bretton Woods regime crumbled, convinced European leaders that monetary policy could be a stabilizing force. In 1979, after an attempt at loosely linking European exchange rates failed, the European Monetary System was introduced, in which a weighted basket of European currencies served as the unit of account. But this too fell prey to speculative attacks, as markets doubted that squabbling politicians could hold the system together.

By the end of the 1980s, European decision makers concluded that the internal anchor of price stability was more easily enforced than the external anchor of exchange rates. Germany's central bankers had held such hard-money values all along, of course, and Mr. James's book allows one to see that the overarching narrative of the half-century is one of the intellectual tide across Europe moving in the Bundesbank's direction. The Spanish and Italian governments had come to see monetary union—and the attendant interest-rate convergence with Germany—as a way to save money on their borrowing costs. François Mitterrand ceded the French Republic's grip on the Banque de France once he realized that Paris could exercise political influence over European monetary policy only from within the new, "Germanic" system. It was a conversion, not a surrender.

The value of "Making the European Monetary Union" is in showing how these ideological swerves played out in real meeting rooms, with real finance ministers, central bankers and heads of government. Commissioned by the Bank for International Settlements and the European Central Bank (ECB), the book benefits from unprecedented access to both institutions' archives. Mr. James's fly-on-the-wall accounts of committee meetings and central-bank deliberations offer illuminating detail about how the precise wording of important agreements came to be decided.

A 1990 meeting of the EEC Monetary Committee, for instance, saw a debate on whether it should be an "objective" of the new system of European central banks to "preserve the integrity of the financial system." Bundesbank board member Hans Tietmeyer said it should be a "task," not an "objective." Eventually it was agreed, at Germany's urging, that the new system wouldn't act as a classical lender of last resort. "Preserve" became "support"; "integrity" became "stability." In the final ECB statute, Article 3 "tasks" the central banks "to promote the smooth operation of payment systems."

Europe finally agreed to go ahead with a single currency and a single monetary policy in 1992. "The most fundamental problems of European coordination—exchange rate and monetary policy issues—were solved as it were by the waving of a wand," Mr. James writes. But were they really? European borrowing costs of course converged under the ECB's single monetary policy. The question ought to have been why: Did banks and investors in the 2000s buy Spanish debt at German rates because they expected Spain's economy to become more like Germany's—or because they expected the euro zone to bail Spain out in the event of a crisis? As it turned out, payments imbalances that previously showed up in exchange rates and central-bank reserves instead showed up as misdirected investment: blowout public spending in Greece and Portugal, housing bubbles in Spain and Ireland. Europe failed to enforce its fiscal rules simply because it was "hard to imagine that balance-of-payments problems would arise in a monetary union," Mr. James writes.

"Making the European Monetary Union" is a book for wonks. Anyone not already well-versed in economics will find it hard going. But Mr. James has produced a valuable companion to today's headlines, a comprehensive primer on how Europe got to its unhappy state. My take-away is that the highly imperfect euro that resulted may be the only euro that a politically dysfunctional and economically unbalanced Europe could have produced. Reading the book is like watching a horror film whose ending you know in advance. At every turn, you want to cry out, Stop!