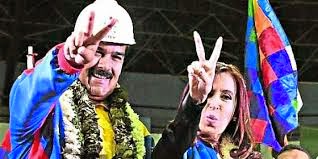 A month after Argentina defaulted on its debt, big companies here say they fear that something else could do much more damage to the economy - legislation letting the government regulate private-sector prices, profit margins and production levels.

On Thursday, Argentina's senate passed a bill to do just that. The bill is expected to pass the lower house within weeks.

As written, the bill would allow the government to "establish, at any stage of the economic process, profit margins, reference prices, maximum and minimum prices, or all or any of these measures."

Critics say the bill, informally dubbed the supply law, would bring Argentine regulations in line with those of Venezuela, where inflation hovers around 60% and goods like sugar and toilet paper can be scarce.
...
"This is absolutely ridiculous. It's part of a very primitive ideology that says government officials should decide what people should make, how much they should make and how much they should charge," said Congressman Federico Pinedo of the opposition Pro party.
...
"We already know exactly what it is like to suffer from these kind of interventionist economic policies," said Luis Etchevehere, president of the Argentine Rural Society, the country's top farm group. "This will lead to divestment and possibly even supply shortages of some products like is now happening in Venezuela."

"If this kind of thing failed in Venezuela, why would you want to try it again here?" asked San Juan Province Senator Roberto Basualdo, himself a businessman. "Nobody will invest in this context."

Nicolás Maduro Jr., the 20-something son of Venezuela's president, met with Argentine legislators here last week, reportedly to discuss the bill and Venezuela's experience with its own version of a supply law.

Argentine officials say the criticism and comparisons to Venezuela are misguided.
"We can require companies to produce things only if they're essential and necessary for people, and could create scarcity problems without them," Mr. Costa said in an interview. "They have to be goods that meet basic and essential needs of the population or there has to be a situation that very clearly distorts the market.

"You won't find any logic in this if you're looking at the economy and the need to attract investment," said Nicolas Solari, a political analyst at Poliarquia. "The supply law is a weapon that lets the government keeps businessmen in line during a period of economic and political adversity."

"This bill constitutes a grave intrusion into the decisions made by private sector companies and is clearly unconstitutional," the Argentine Business Association said a recent statement.