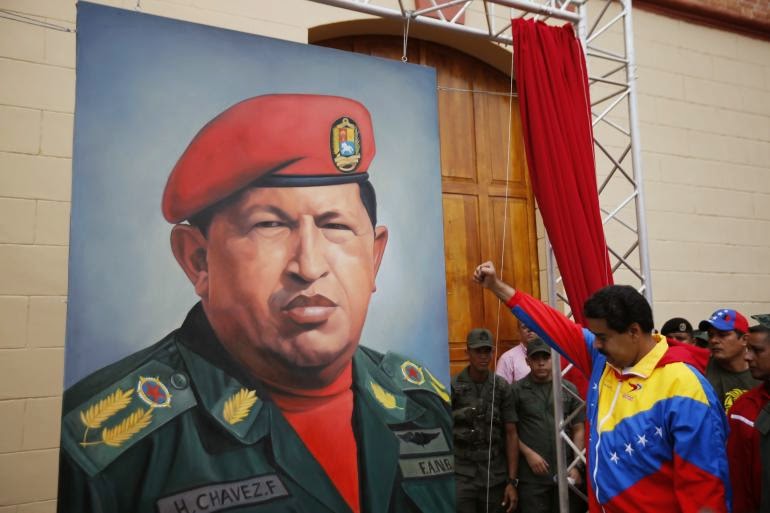 
Venezuela’s national parade ground at the Fort Tiuna military base presents a scene that local civilians can only dream of -- stalls laden with goods and no waiting lines.
The market with everything from subsidized meat to baby strollers, along with loans, new cars and apartments, are perks provided to the armed forces as the economy contracts, poverty rises and President Nicolas Maduro’s popularity sinks to a record low.
The benefits help ensure the loyalty of the military, while siphoning reserves away from the poor who have seen wage growth fall behind inflation, according to analysts, citizen activists and academics.
Since Maduro came to power 17 months ago, the armed forces have created their own television channel, housing program and bank, the only military-owned one outside Iran and Vietnam. A third of Venezuela’s 28 ministers and half the state governors are now active or retired officers, mostly companions of former paratroop commander and late President Hugo Chavez.
“The military remains the only element guaranteeing political stability under Maduro’s weak government,” Diego Moya-Ocampos, an analyst at consulting firm IHS Country Risk, said by phone from London. “As an outsider, Maduro had to give the generals a bigger role in managing the country to keep them on-board. He has militarized politics.”
Maduro named a brigadier general as economy vice-president on Sept. 2, the second most important post in the cabinet. He now has eight active or retired officers in the cabinet, up from five in 2012, the year before Chavez died.

Fifteen years after Chavez started his revolution in “21st century socialism,” South America’s largest oil producer is running out of money, the economy is contracting and companies and investors are deserting what was Latin America’s richest nation in 1980.
Inflation has more than doubled and the bolivar slumped 76 percent against the dollar on the black market since Maduro came to office in April 2013 describing himself as the “son of Chavez.” More importantly to his support, the poverty rate has started to rise, climbing to 32 percent at the end of last year from a record low 25 percent in 2012, according to the National Statistics Institute.
Military personnel don’t have to contend with the economic chaos in the rest of the country. The 43 trucks and tents at the market in the military base on Aug. 22 were loaded with subsidized milk, cooking oil and detergents -- goods that are out of stock in most shops.
People line up for hours outside state-owned supermarkets to buy regulated staple goods, or pay three times as much from street hawkers. One in four basic goods were unavailable at any given time in January, the last month for which figures are available.

The army’s support for the government was on display when the protests started in February. A television station owned by the armed forces broadcast Chavez’s speeches accompanied by songs such as “Maduro From My Heart.”
“The TV station is born with a mission to fight for the ideology of our eternal commander, Hugo Chavez,” the broadcaster’s president, General Pedro Alvarez, said during the channel’s launch in December. The telecommunications regulator has ordered every cable provider to show the channel.
While anger mounts among ordinary citizens, the loyalty of the military is ensured, said Rocio San Miguel, director of Citizens’ Control.
The military has been given control of many sectors of the economy, while active or retired officers are in charge of the finance, food and industry ministries.

Retired officers now control the bulk of food imports, helped by colleagues still in the military or politics, according to retired captain William Biancucci, a former member of Chavez’s strategic planning team who imported as much as $110 million of livestock from Brazil between 2009 and 2011.
Congressional elections due in December of next year will show how much resentment the policy of buying off the military has created.
“There’s a political cost Maduro will pay for prioritizing the soldiers over the poor neighborhoods,” Hugo Perez Hernaiz, sociology professor at Central University of Venezuela in Caracas, said by telephone. “The size of this cost will be seen in the next elections.”
Postado por Pedro Erik Carneiro às 11:37