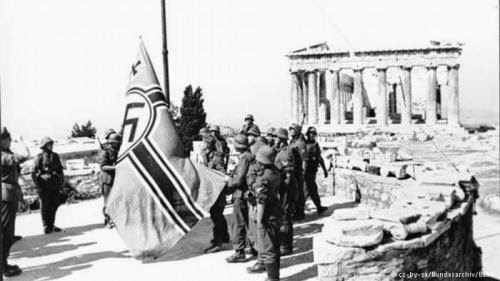 
Earlier today, despite fears that it may not find enough cash to fund its latest T-Bill rollover, Greece was able to sell €1.3 billion of three-month Treasury bills, covering the amount it wanted to refinance a maturing issue, in what Reuters dubbed was an "auction that tested its ability to raise funds amid a cash crunch." The paper came at a higher cost as the T-bills were priced to yield 2.70 percent, up 20 basis points from 2.50 percent in a previous sale in February, the country's debt agency PDMA said.
However, this latest funding appears to have brought Greek funds to a critical low level because roughly at the same time news broke that Greek Justice Minister Nikos Paraskevopoulos said he is ready to sign an older court ruling that will enable the foreclosure of German assets in Greece in order to compensate the relatives of victims of Nazi crimes during the Second World War.
As Kathimerini reports, Greece's Supreme Court ruled in favor of Distomo survivors in 2000, but the decision has not been enforced. Distomo, a small village in central Greece, lost 218 lives in a Nazi massacre in 1944.
Some background on the story from Keep Talking Greece:


On Tuesday, Greek Justice Minister Nikos Paraskevopoulos said that he was ready to sign an older decision issued in year 2000 by Greece’s Highest Court Areios Pagos that enables confiscation of German state property in Greece. The court decision confirmed the First Instance Court decision of 1997 that had ruled that Germany had to pay €28 million to descendants of the Distomo massacre.

On 10 June 1944, Waffen SS killed 218 men, women and children of Distomo village, in reprisal for attacks by resistance fighters.

“The confiscation of German property in Greece would affect the Goethe Institute and the German Schools in Athens and Thessaloniki,” Greek media report.

Speaking to ANT1 TV this morning, Paraskevopoulos said that the court decision needs only the signature of the Justice Minister in order to go in effect. However he implied that this will not be done immediately.

According to Greek media, already in 2000, PASOK Justice Minister had signed the court decision and a justicial clerk appeared at the door of Goethe Institute in Athens.

“However, the Justice minister withdrew his signature. after a couple of days later Germany approved the entrance of Greece to the Euro zone,” notes Proto Thema.

Also on Tuesday, deputy Defense Minister Kostas Ysichos said that the ministry has the so-called Wehrmacht- Archive, an archive of 400,000 records of the German occupation,  that is currently in the process of digitilization.


As KTG succinctly observes, "The decision comes amid a frozen atmosphere between Greece and Germany over bailout reforms and a series of insults spoken by German Finance Minister Wolfgang Schaeuble against his counterpart Yanis Varoufakis."
During the same debate, Prime Minister Alexis Tsipras expressed his government’s firm intention to seek war reparations from Germany, noting that Athens would show sensitivity that it hoped to see reciprocated from Berlin.
Then again, "sensitive" is hardly how one would characterize his speech: when speaking before Parliament, Tsipras accused Germany of using legal tricks to avoid paying reparations for the Nazi occupation of Greece and said he would support parliamentary efforts to review the matter.
“After the reunification of Germany in 1990, the legal and political conditions were created for this issue to be solved. But since then, German governments chose silence, legal tricks and delay. And I wonder, because there is a lot of talk at the European level these days about moral issues: is this stance moral?” Tsipras said and added that "despite the crimes of the Third Reich and Hitler’s hordes, the German debt was written off".
Germany has repeatedly rejected Greek calls for WWII reparations claiming that “war compensations to individuals was settled with the "Agreement of 1960" and the “Agreement of 1990.”
However, “the Agreement of 1960 covered only compensation for the individual victims of Nazi horrors, not the destruction wrought on Greece during the 1941-1944 occupation and the enforced loan,” Tsipras said.
Why is Greece pushing for any recovery on the reparations front? Because the amount for the cash-strapped, and now desperate, country could be substantial: "according to some sources, the Greek claims from Germany are estimated  €269 – €332 billion. In April 2013, after the investigation committee concluded its work, newspaper To Vima reported that the Greek claim was 162 billion euro."

To Vima stressed to have seen the findings and reports that the experts found that Germany should pay Greece 108 billion euros for damage to infrastructure and 54 billion euros for a loan that the Nazi occupation forces obliged Greece to take in order to pay Berlin during the war.

In other words, the reparations are equivalent to about 80 percent of Greek gross domestic product.