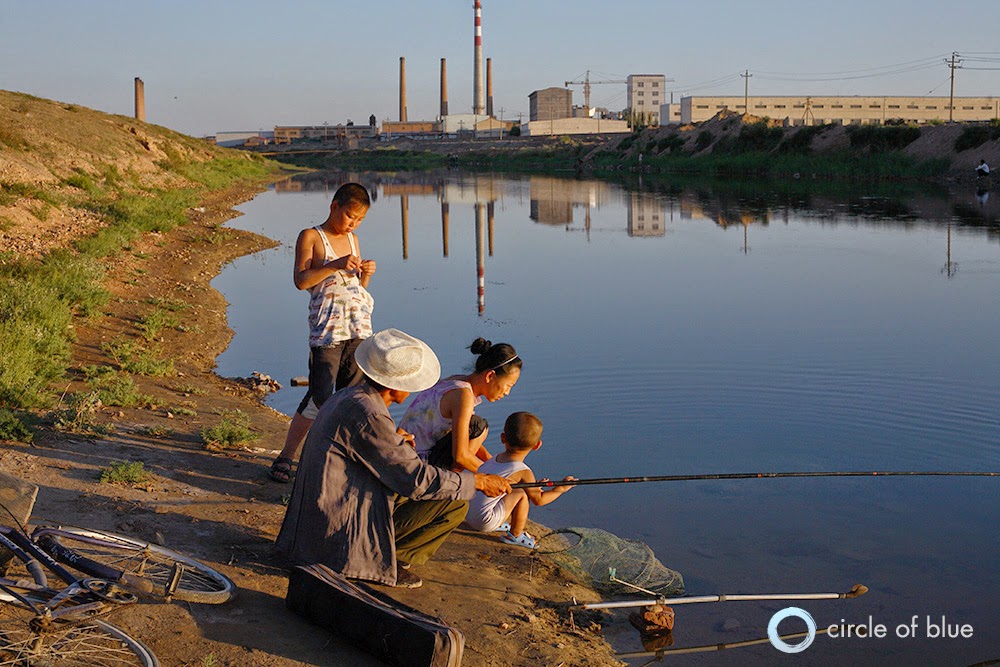 If You Thought China's Air Was Bad, Try the Water

On Friday the government of Lanzhou, China, informed its 3.6 millionresidents that their drinking water would be carcinogenic for the next 24 hours. Benzene, a chemical used in plastics manufacture, was the immediate cause, but that wasn't even the most horrifying revelation to come from this crisis. Today, reports from state media revealed that the benzene had been released into the environment as a result of oil pipeline explosions -- in 1987 and 2002. The pipelines, owned by state-owned China National Petroleum Corporation, were repaired at the time. Some 34 tons of contaminated soil, however, were left in place, the benzene allowed to migrate into an underground water duct that empties out via household faucets.
It’s a horrifying revelation, but not an uncommon or surprising one. Indeed, even though air pollution gets the headlines, it’s water pollution that will stand as the enduring, hazardous legacy of China’s industrial renaissance. The examples are rife and often revolting. In 2013, 16,000 dead pigs floated down Shanghai’s Huangpu River; in 2005, a chemical explosion in Jilin Province released 100 tons of toxic chemicals, including benzene, into the Songhua River, creating a 50-mile slick. Smaller incidents are rarely reported but visible across rural China where, in my experience, every town shares two features: an elaborate Communist Party headquarters, and a poisoned canal.
The Chinese government knows it has a problem, and in recent years it’s released national-level data that paints a devastating picture. In 2012, for example, the Ministry of Water Resources conceded that 40 percent of China’s rivers were seriously polluted in 2011, with 20 percent “too toxic even to come into contact with,” according to Shanghai Daily. Similarly, in 2012, China’s Ministry of Land and Resources released a report showing that 40.3 percent of 4,727 monitored wells in 200 Chinese cities had “bad” water quality, and another 14.7% had “extremely bad” quality. Meanwhile, in Shanghai, a2013 water census contained the depressing news that only 3.4% of the city’s water was unpolluted and suitable for drinking or aquaculture.
How did things get so bad? Like China’s more famous air pollution, the country’s water pollution is the inevitable product of a governing agenda that prioritized economic growth and loosened the reins on local governments and state-owned enterprises in order to create it. Unburdened from having to consider the long-term, health-damaging effects of their modes of production, China’s job creators planned recklessly. In Lanzhou, for example, the China National Petroleum Corporation appears to have sited pipelines in close proximity to water supplies (and then failed to take sensible measures when those pipelines ruptured). In a more accountable system of government, a local official or two -- theoretically -- would have pushed back. Under China’s system, those officials knew that they had everything to gain by not interfering with powerful state-owned oil monopolies.