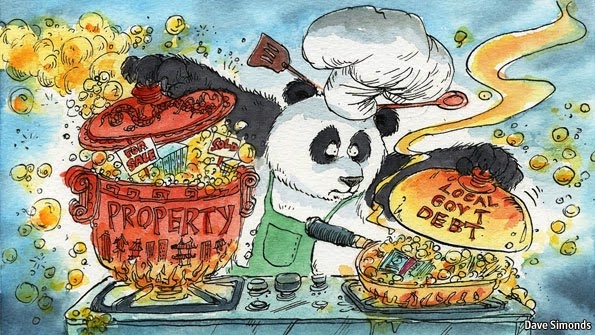 China’s biggest banks more than doubled the level of bad loans they wrote off last year, in a sign that financial strains are mounting as growth in the world’s second-largest economy slows.
The five biggest Chinese banks, which account for more than half of all loans in the country, removed Rmb59bn ($9.5bn) from their books in debts that could not be collected, according to their 2013 results. That was up 127 per cent from 2012, and the highest since the banks were rescued from insolvency, recapitalised and publicly listed over the past decade.
The sharp acceleration in write-offs is the latest indication of the turbulence now buffeting China’s financial system. The bond market suffered its first true default in March, two high-profile shadow bank investment products were spared from collapse by last-minute bailouts earlier this year, and a small rural lender suffered a brief bank run last week.
Data also point to a deeper economic downturn in the first quarter than expected, putting China on track this year for its slowest growth since 1990.
The deterioration has fuelled expectations that Beijing will act soon to shore up the economy. “Increasing downward pressure on the economy should not be neglected,” Li Keqiang, China’s premier, said last week. “We have policies in store to counter economic volatility.”
China’s banks built up strong defensive walls over the past decade of their turbocharged growth that are now being tested. Since they had already set aside large reserves against possible losses, they were able to double their loan-write offs without undercutting their profitability or their capital cushions.
Profits for the five biggest banks, including Industrial and Commercial Bank of China, rose 7 to 15 per cent in 2013, slower than 2012 but still healthy. Thanks to the write-offs, the banking sector’s bad loan ratio edged up just slightly last year, to 1 per cent from 0.95 per cent. However, the market valuation of Chinese bank shares shows that investors believe their bad loans might be as much as five times higher than officially reported.
Liao Qiang, China banks analyst with rating agency Standard & Poor’s, said lenders appeared to have adequate provisions for a downturn. But he expressed concern that banks were using write-offs to keep their non-performing loan (NPL) ratios artificially low.
“Some banks fear that if the NPL ratio is undesirably high, there may be some negative publicity, and so they are more active in write-offs,” he said.
This has been particularly the case with midsized lenders, which bore the brunt of a cash crunch last June when interbank borrowing rates spiked to double digit levels. Minsheng Bank, which reported its 2013 results on Sunday, said its bad-loan ratio rose to a mere 0.85 per cent last year from 0.76 per cent in 2012. But had it not been for aggressive write-offs and transfers of bad debt to third parties, Minsheng’s underlying NPL formation rate would have been 135 per cent higher, according to analysts at Citi.
Regulators have recently relaxed write-off rules to make it easier for banks to strip out bad debts, allowing them to free up space on their balance sheets to absorb a fresh wave of defaults.
Mr Liao said he expected the pace of write-offs would accelerate this year.

Xuzhou Zhongsen Tonghao New Board Co., based in the eastern province of Jiangsu, missed the 10 percent coupon payment due March 28 on the notes, which it sold 180 million yuan ($29 million) of last year in a private placement, the report said, citing an unidentified person. This would be the first default in China’s private-placement market for high-yield bonds from small- and medium-sized enterprises that was started in 2012, according to Yang Aibin, a general manager at Pengyang Investment Management Co.

It would also mark the second default for the country’s onshore note market, following one by Shanghai Chaori Solar Energy Science & Technology Co. (002506) last month. Increasing defaults may signal the government has backed off from its practice of bailing out companies with bad debt. Premier Li Keqiang said in March at the conclusion of an annual legislative gathering that some defaults may be unavoidable as authorities tighten credit.

“In general, what we will see is a gradual unwinding of implicit government guarantee for a lot of credit products in China,” said James Zhao, chief investment officer in Beijing at the international department of CCB Principal Asset Management Co. “There will continue to be a mixture of bond defaults and too-big-to-fail, or too-entangled, cases. It’s now up to the market to find the pattern and investors will now have to figure out who is creditworthy and who is more likely to fail. It’s a positive development.”

Sino-Capital Guaranty Trust, the guarantor for the Zhongsen Tonghao security, refused to pay on behalf of the company, according to the Guangzhou-based financial newspaper.

A woman who answered the phone at Zhongsen Tonghao and wouldn’t give her name said the company couldn’t immediately comment on the matter. Two calls to Sino-Capital Guaranty Trust went unanswered.
Reluctance to bail out companies that can’t repay debt signals “regulators’ higher tolerance for corporate bond defaults amid financial market reforms, which is in line with the current central administration’s shift to adopt more market-oriented policies,” Moody’s Investors Service said in a report on March 7.

The number of Chinese companies whose debt is double their equity has surged since the global financial crisis, suggesting more defaults may come. Publicly traded non-financial corporates with debt-to-equity ratios exceeding 200 percent have jumped 57 percent since 2007. Chaori Solar may become China’s own “Bear Stearns moment,” prompting investors to reassess credit risks as they did after the U.S. securities firm was rescued in 2008, according to Bank of America Corp.