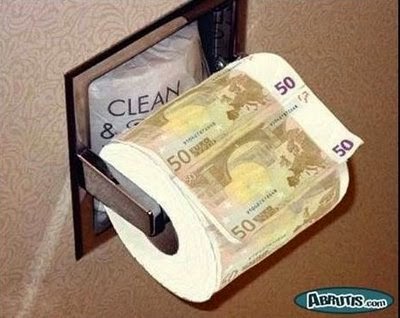 Mario Draghi’s asset-purchase plan to ward off deflation may be lacking one key element: enough assets to buy.
Since the European Central Bank President buoyed investors last week by saying policy makers backed quantitative easing as a way to boost prices if needed, officials including Governing Council member Ewald Nowotny have signaled any purchases may center on asset-backed securities. While that makes sense in an economy funded mostly by bank loans, it’s also a market Draghi once described as “dead.”
The ECB’s focus on ABS for monetary easing risks guiding it toward a policy that might be slow to evolve and far smaller than the 1 trillion euros ($1.4 trillion) in bond purchases it has already simulated. Draghi has said international regulators must change the rules on ABSs, yet those officials are steering against the easy creation of complex products because of the role they played in the global financial crisis.
“A preference for ABSs has been expressed time and again - - and in fact it is the first asset class that would make sense for the ECB to buy,” said Marco Valli, chief euro-area economist at UniCredit Global Research in Milan. “The market’s revival is conditional on the regulator changing capital requirements. Until this changes, jump-starting the ABS market is difficult and demand for these securities will remain weak.”

Securitization of assets spreads risk by packaging individual loans such as mortgages, auto credit or credit-card debt and selling them on to investors.
“I’d see measures to strengthen the ABS market in Europe as the first relevant measure,” Nowotny said on April 7. “My personal emphasis would lie in this area.”
Total issuance of securitized assets in Europe was 250.9 billion euros in 2012, compared with the equivalent of 1.55 trillion euros in the U.S., according to data compiled by the Association for Financial Markets in Europe. Issuance in the first half of 2013 was 83.5 billion euros in Europe and 880 billion euros in the U.S. Moreover, some European securitizations are used as collateral against loans from the central bank, making them unavailable for an ECB purchase program.
The total of European issuance would be dwarfed by the size of at least one QE simulation run by the ECB. Officials ran models testing the impact of purchases of 1 trillion euros of bonds, a person with knowledge of the matter told Bloomberg News on April 4.

Greece’s central bank governor, George Provopoulos, said in an interview yesterday that the ECB Governing Council is now “reflecting” on the design of a quantitative-easing program.
The ECB is “unanimously committed to using all instruments within its mandate, conventional and unconventional, to deal effectively with the risks of a too-prolonged period of low inflation,” he said inAthens.
Draghi said on April 3 that the ECB could access a bigger pool of securitized bank loans if only there was a more-liquid market in which to do so. The total stock of outstanding loans in the euro area was 17 trillion euros at the end of 2013, according to ECB data.
“If we are able to have these loans being correctly priced and rated, and traded, like it would happen, like it used to happen in the ABS market before the crisis, then we naturally have a very large pool of assets,” he said at his monthly press conference.

The ABS market can only function better with the help of rule-setters including the Basel Committee on Banking Supervision and the European Union, officials say. The central bank has said that current capital requirements are too strict for banks holding ABS.
“It is clear to everyone that the ECB feels that EU ABSs are being treated inappropriately by present regulations and proposals,” Executive Board member Yves Mersch said on April 7. The ECB and theBank of England will present a joint paper on revamping ABS regulation this week at the Spring meetings of the International Monetary Fund in Washington.
The EU, while recognizing the need to boost the market, is still wary of the downsides. The complicated structure of the products can obscure the true riskiness of the underlying assets, as happened with ABSs backed by the U.S. sub-prime mortgage market which lead to them being blamed by regulators for sparking the financial crisis.

“We won’t forget what happened,” Michel Barnier, the EU’s financial services chief, said in an interview on April 2. “The key thing is to come up with very strict, rigorous, transparent and simple criteria.”
ABS isn’t a feasible route for ECB quantitative easing any time soon, according to Richard Barwell, senior European economist at Royal Bank of Scotland Group Plc in London.
“If the ABS-focused private-sector asset purchase program model is first among equals as a template, then that suggests further potential for delay,” he said.
If regulations can be relaxed, the ECB’s history in the covered bond market could provide a clue as to what the central bank intends to do now. Covered bonds, which differ from ABS in that the risk remains on the issuing bank’s balance sheet, don’t face the same regulatory obstacles as ABS.

Between 2009 and 2012, the ECB purchased about 80 billion euros of covered bonds with the aim of easing credit conditions and boosting lending. That program did help rekindle the market. In the first quarter of this year, covered bonds with a value of 38.5 billion euros were issued, up 37 percent from the same period a year earlier, according to Karsten Ruehlmann, an analyst at Landesbank Baden-Wuerttemberg in Stuttgart.
Even so, if the ECB wants to buy assets other than government debt, its options are limited, according to Christian Schulz, senior economist at Berenberg Bank in London.
“Beyond sovereign bond markets, many instruments, like ABS, are too non-transparent,” he said. “The Fed, Bank of England and Bank of Japan concentrated their bond purchases on the sovereign bond market. The Fed’s purchases of mortgage-backed securities would be difficult to replicate in theeuro zone, at least at the same order of magnitude.”
An ABS intervention shouldn’t be confused with quantitative easing, according to Francesco Papadia, a former director general of market operations at the ECB who is now chairman of Prime Collateralized Securities, an industry standards group.
“An ABS program similar to the one for covered bonds would be reasonable and possibly even useful, but that wouldn’t be QE under any interpretation of the term,” he said. “I am not saying the ECB cannot do anything. On the contrary, the ECB could do something, but it couldn’t be classified as QE.”