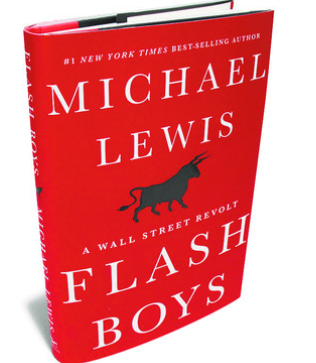 
Wall Street has always attracted more than its share of scammers and bandits. Today's prime exemplars, argues Michael Lewis in "Flash Boys," are high-frequency traders—or HFTs—who nickel-and-dime investors by exploiting a technological arsenal of servers, fiber-optic cable and microwave transmission towers to trade milliseconds ahead of everyone else in the markets. They have turned the exchanges into a computerized monster churning up unprecedented market volatility. All this has happened since the 2008 financial crisis, a period in which the markets were supposed to have been under closer scrutiny than ever.

Back in the day, if an investor wanted to buy or sell a stock, he would call a broker, who would find a way to execute the trade as efficiently as possible by talking to other human beings. The arrival of computerized exchanges slowly eliminated people from the process. Instead, bids and offers were matched by servers. The shouting men in colorful jackets on the exchange floors became irrelevant. In theory, this meant that the cost of trading fell and that the markets became more efficient. But the effects of technology are rarely so simple.

In 2002, 85% of all U.S. stock-market trading happened on the New York Stock Exchange and the rest mostly on the Nasdaq. NDAQ -1.92% By early 2008, there were 13 different public exchanges, most just stacks of computer servers in heavily guarded buildings in northern New Jersey. Now, if you place an order for 1,000 shares of Microsoft, MSFT -1.37% it pings from exchange to exchange claiming a few shares at each stop, seeking the best price until the order is completed. But the moment that it hits the first exchange, the HFTs see it, and they race ahead to the other exchanges, buy the stock you want, and sell it back to you for fractionally more than you hoped to pay. All in a matter of milliseconds, millions of times a day to millions of investors—your grandmother and hedge-fund titans alike. These tiny but profitable trades, Mr. Lewis writes, add up to big profits for firms like Getco and Citadel. He cannot put a hard number on the size of the industry, suggesting only that many billions are involved.

...
Mr. Lewis wants to argue, though, that the markets are not just ridiculous, but rigged. The heroes of this book are clear: Mr. Katsuyama eventually assembles a team of talented misfits to create an HFT-proofed exchange called IEX, where a price is a price is a price. It's backed by leading hedge funds and banks (and Jim Clark, the co-founder of Netscape and the subject of Mr. Lewis's 1999 book, "The New New Thing"). Mr. Lewis gives the reader extensive insight into how his heroes see the market, but the alleged villains of the piece—HFTs themselves—are all but silent in their own defense. "Flash Boys" is a decidedly one-sided book.
Yet there are reasonable arguments to be made that the frenetic trading by HFTs leads to greater liquidity and more efficient pricing. Or, God forbid, that they are not nearly so harmful to investors' returns as Mr. Lewis makes out. Their rise has coincided with a historic bull market. It is not hard to imagine a different book by Michael Lewis, one celebrating HFTs as revolutionary outsiders, a cadre of innovative engineers and computer scientists (many of them immigrants), rising from the rubble of 2008 and making fools of a plodding financial system. "Flash Boys" makes no claim to be a balanced account of financial innovation: It is a polemic, and a very well-written one. Behind its outrage, however, lies nostalgia for a prelapsarian Wall Street of trust and plain dealing, which is a total mirage.