For two months, China has been on a quest to control both the stock market itself and the narrative around the stock market.
After an unwind in the CNY1 trillion back alley margin lending complex sparked a late June selloff, China cobbled together a plunge protection team run by China Securities Finance (an arm of CSRC) and began intervening in the market.
That effort has cost an estimated CNY900 billion so far.
On July 20, Caijing magazine suggested that CSF was setting up to scale back the market interventions which many believed had kept the SHCOMP from collapsing altogether. Here's what happened next:

That suggestion caused futures to slide in China and in short order, the "rumor" was denied by CSRC. Now, the reporter who penned that story has been arrested for, as Bloomberg put it earlier today, "spreading fake stock and futures trading information."
This comes on the heels of a move by Beijing earlier this week to suppress discussion of Monday's market rout, which, along with the selloffs it triggered in bourses across the globe, was dubbed "Black Monday."


Of course this isn't the first time - and it probably won't be the last - that China has cracked down on the media for "subversive" coverage of financial markets. Early last month, Beijingreportedly banned the use of the phrases "equity disaster" and "rescue the market." That said, throwing reporters in jail marks a new escalation in the war on financial reporters, or, as the managing editor of The South China Morning Post put it, "you already know it's risky to be political journalists in China - Now financial reporter is risky job too."
But reporters weren’t the only ones getting arrested in China overnight in connection with the country’s stock market collapse. As we tipped on Tuesday evening, China has also arrested CITIC Securities Managing Director Xu Gang.

Here’s his profile, via Bloomberg:

Mr. Gang Xu serves as the Managing Director at CITIC Securities Company Limited. Mr. XU serves as Chairman of the brokerage development at CITIC Securities Co., and head of the research department with responsibility for brokerage business as well as research. Mr. Xu joined CITIC Group in 1998 and served as Senior Manager, Deputy General Manager and Executive Director in departments such as the asset management department, the financial products development team, the research department and the equity sales and trading department. Mr. Xu serves as Vice Chairman of Analysis Commission of SAC. Mr. Xu serves as Director of CITIC Wantong Securities Co., Ltd. He holds a Bachelor's Degree in Planned Economics in 1991 from Renmin University of China, a Master's Degree in Economics in 1996, and a Ph.D. in Political Economics in 2000 from Nankai University.

Details around the arrest are sparse, with Caixain saying only that the investigation revolves around "illegal trading," and indeed, it's certainly possible that Beijing is simply out to send a message by arresting a high profile investment banker for no reason at all.
That said, it's worth noting that earlier this month, CITIC suspended its short selling business in an effort to "comply with urgent changes in exchange rules."
So perhaps Mr. Gang Xu failed to fully "comply", in the process becoming no better than a sinister foreign short-selling speculator.

Or perhaps it's much simpler than that. Perhaps he just sold something.
And while US regulators aren't big on throwing powerful bankers in jail, when it comes to censoring the media for spreading "false information" about markets and those who control them, America isn't much better than China: 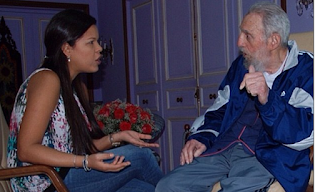 The daughter of Hugo Chavez, the former president who once declared 'being rich is bad,' may be the wealthiest woman in Venezuela, according to evidence reportedly in the hands of Venezuelan media outlets.

The figure would make Gabriela Chavez wealthier than media mogul Gustavo Cisneros, whom Forbes named the wealthiest Venezuelan earlier this year with $3.6billion in assets.

The Miami-based newspaper did not detail what evidence there was outlining Chavez's assets, though there have long been rumors she held a sizable fortune.

Last year, reporter María Elvira Salazar displayed what appeared to be a receipt showing millions in a bank account belonging to Gabriela Chavez withdrawn in the United States.

The receipt displayed the name Frabz Federal Bank, a fictitious bank used in a meme of fake ATM receipts.

Others close to Chavez managed to build up great personal wealth that was kept outside the petrostate.

Alejandro Andrade, who served as Venezuela’s treasury minister from 2007 to 2010 and was reportedly a close associate of Chavez, was discovered to have $11.2billion in his name sitting in HSBC accounts in Switzerland, according to documents leaked by whistleblower Hervé Falciani.

During his lifetime, Hugo Chavez denounced wealthy individuals, once railing against the rich for being 'lazy.'

'The rich don't work, they're lazy,' he railed in a speech in 2010. 'Every day they go drinking whiskey - almost every day - and drugs, cocaine, they travel.'

After her father's death in 2013 and until her appointment to the United Nations as alternate ambassador, Chavez continued to live in the presidential mansion, forcing the current president Nicolas Maduro to remain at the vice presidential home.

El Comercio reported in 2014 that opposition congressman Carlos Berrisbeitía claimed the daughters of Chavez and Maduro, were costing the Venezuelan state $3.6million a day