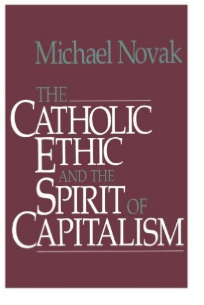 (Washington, D.C.) Michael Novak, groundbreaking author, philosopher, theologian, and faculty member of Catholic University’s Tim and Steph Busch School of Business and Economics since last August, is remembered at the University as one of the country’s most influential thinkers and a mentor to business students and faculty, among many others.
Novak, who died Feb. 17, 2017, at the age of 83, joined The Arthur and Carlyse Ciocca Center for Principled Entrepreneurship last year as a distinguished visiting fellow. He taught Special Topics in Management and gave a series of lectures on campus on the topic of human ecology.
Novak, whose 1982 book The Spirit of Democratic Capitalism changed the public conversation about the benefits of capitalism, was awarded the Templeton Prize for Progress in Religion in 1994, and served as Ambassador to the UN Commission on Human Rights in 1981 and 1982.
Novak studied at Catholic University in 1958 and 1959 and had lectured at the University several times prior to last year’s appointment. University President John Garvey remembered him as “a man of great intellectual honesty.”
“Unlike some scholars, Michael Novak made it a point to reflect on new and different topics, always with a fresh and dynamic perspective,” Garvey said. “We are immensely grateful that he could end his academic life as he began it, as a member of our community.”
Andreas Widmer, director of The Arthur and Carlyse Ciocca Center for Principled Entrepreneurship, recalled Novak as a mentor and described him as the “founding father” of the discussion about the intersection of faith and economic activity.
“My colleagues and I have been touched by his kindness and humility. He was quick to encourage others and was generous with his time,” Widmer commented. “You would never have known from working with him that this was a man who had counseled popes and changed the course of history. It meant so much to me this past year to have Michael, who has long been a mentor and friend, beside me as a colleague at Catholic University.”
In a 2014 address at Catholic University Novak described the University as “a sacred place” and talked with fondness about the faculty members he had studied under, among them Monsignor John Tracy Ellis, Monsignor Robert Trisco, Rev. Gene Burke, Monsignor Joseph Fenton, and Rev. Francis J. Connell.
Upon his appointment to Catholic University as a visiting fellow, Novak commented on the University’s commitment to promote Catholic Social Doctrine as a means to human flourishing.  “If, as a teacher you want to reach the 1.2 billion Catholics in the world, many of whom are poor, where better to be?”
In 2006, Novak and his wife, Karen Laub-Novak, established two scholarship funds to support philosophy graduate students, one in his name for students working on the intersection of philosophy and religion or public policy and one in her name for students interested in the philosophy of beauty.
The author of more than 50 books who was highly regarded for his religious scholarship and intellectual independence, Novak shared his insights into the spiritual foundations of economic and political systems and the moral ideals of democratic capitalism in syndicated columns and innumerable lectures, articles, and commentaries.
Novak wrote on topics as varied as capitalism, human rights, labor union history, sports, peace, families, and the role of churches in a pluralistic world. His books have been translated into every major Western language, as well as Bengali, Korean, Chinese, and Japanese.
He considered his greatest honor to be that Pope John Paul II called him a friend, as did Prime Minister Margaret Thatcher and President Ronald Reagan.
The son of Michael J. Novak and Irene Sakmar, Novak was born on Sept. 9, 1933, in Johnstown, Pa. Discerning a call to the priesthood, Novak entered Holy Cross Seminary of the Congregation of Holy Cross at Notre Dame at the age of 14. He earned a bachelor’s degree in philosophy from Stonehill College in Easton, Mass., graduating summa cum laude in 1956.
Later he earned a Bachelor of Sacred Theology at the Pontifical Gregorian University in Rome, graduating cum laude in 1958. He then transferred to Catholic University, where he studied for two semesters, forming a lifelong attachment to the University.
He taught at Harvard, Stanford, Syracuse, Notre Dame, and Ave Maria universities and was awarded 27 honorary degrees, including one from Catholic University in 2015.
In his name, the Acton Institute, a Michigan-based think tank, created the Novak Award, which honors outstanding scholarly research concerning the relationship between religion, economic freedom, and the free and virtuous society.
Three Catholic University professors have been recipients of the award: Andrew Abela in 2009, then an associate professor of marketing and founding dean of the school of business and economics, who now serves as University provost; Catherine Pakaluk in 2015 who joined The Busch School faculty a year later as an assistant professor of economics; and Maximillian Torres in 2003 who joined the faculty as associate professor and director of management in 2014.

By David Rose for The Mail on Sunday