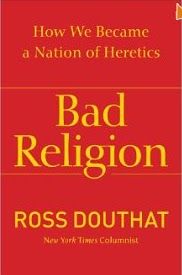 RINOs and CINOs: The Cult of Mammon and the Future of America

We have just passed through a rather odd election in which a weak president running on a doubtful record in the midst of an uncertain recovery was, nevertheless, able to gain a decisive victory over his Republican opponent. The loss has triggered a civil war in the Republican Party, a battle that has pitted principles against pragmatism. Those who would stand on principle assume that a “real” conservatism, whatever that might be, would have vast appeal across a sufficiently wide swath of the population to make the party competitive. The pragmatists contend that Romney was hampered by a “conservatism” that was mostly about social issues and missed the “real” conservatism of economic issues. The result is that that party has formed itself into a circular firing squad in an effort to root out the RINOs (Republicans In Name Only.)

But what if the real problem isn’t about politics, but about religion? What if the question is not about RINOs but about CINOs (Christians In Name Only) and the real issue isn’t about deviation from the party line but from the gospel message? This is the question implicit in Ross Douthat’s brave new book, Bad Religion: How We Became a Nation of Heretics. The bravery begins with the title: “Bad” religion? Isn’t that a charge we are likely to hear from conservatism’s enemies on the left? And who in this day and age speaks of “heresy”?
Yet if we are serious about conservatism than we must be serious about what it is we wish to conserve. And if religion is among those things worth conserving, then we cannot be indifferent to its content. Of course, one could take the position of Dwight Eisenhower, that our country depends on a deeply felt faith “and I don’t care what it is.” But surely, this already concedes too much to liberalism, already acknowledges that faith is no more than a feeling, and if this is so, then we cannot say that one person’s feelings are better than another’s. In such a case, there can be no “bad” religion because there can be no “good” religion, and the use of the term “heresy” is itself heretical.
But for Douthat, our politics are a reflection of our faith and can never be better than that faith. Faith is not something optional, as certain liberals would have it; indeed, the claim to be standing on some “neutral” ground is always bogus, always an attempt to gain an unfair advantage for one’s own faith by claiming it is not a faith at all. What is usually meant by this claim is a naïve and touching faith in something called “progress,” a progress that advances by crushing or at least marginalizing any competing faith. The great questions of politics will always involve contending faiths, that is to say, contending visions of what constitutes the “good” for men and society. Nor is this a question that can be settled by some “science,” for it lies completely outside the domain of empirical science and depends on sciences of a different order.
If faith is not something we can avoid, then the content of religion is not something we can ignore, even politically. Here, Douthat advances a radical proposition about the nature of America’s malaise:

America’s problem isn’t too much religion, or too little of it. It’s bad religion: the slow-motion collapse of traditional Christianity and the rise of a variety of destructive pseudo-Christianities in its place. Since the 1960s, the institutions that sustained orthodox Christian belief— Catholic and Protestant alike— have entered a state of near-terminal decline. The churches with the strongest connection to the Christian past have lost members, money, and authority; the elite that was once at least sympathetic to Christian ideas has become hostile or indifferent; and the culture as a whole has turned its back on many of the faith’s precepts and demands. (Douthat, Bad Religion: How We Became a Nation of Heretics, 3)