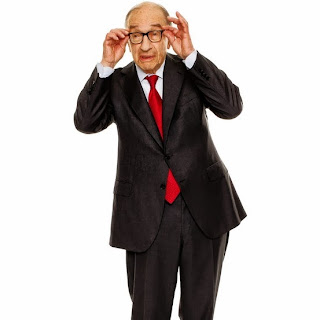 Alan Greenspan, the former chairman of the Federal Reserve, goes to a lot of parties. He and his wife, the TV journalist Andrea Mitchell, "sort of get invited everywhere," he says, sitting in front of the long bay window in his office on Connecticut Avenue in Washington, D.C. Lately, though, cocktails and dinners seem to have guest lists drawn almost exclusively from one political party or the other. "It used to be a ritualistic 50-50 at parties—the doyennes of culture and partying were very strict about bipartisanship," he adds. "That doesn't exist anymore."

In his new book "The Map and the Territory," to be released on Tuesday, Mr. Greenspan, 87, goes on a hunt for what has gone wrong in American politics and in the U.S. economy. He doesn't blame the current administration for today's partisan divide. The culprit? "It's the benefits," he says, pointing to the disagreements between Republicans and Democrats over how to deal with the growth of entitlements.

In the book, he also ponders why the Fed failed to predict the financial crisis, where he himself went wrong and how that discovery has completely changed his worldview.

Mr. Greenspan's biggest revelation came one day about a year ago when he was playing with gross domestic savings numbers. What he found, to his surprise and initial skepticism, was that an increase in entitlements has closely corresponded to a decline in the country's savings. "We had this extraordinary increase in benefits, with each party trying to outbid the other," he says. "That practice has been eroding the country's flow of savings that's so critical in financing our capital investment." The decline in savings has been partly offset by borrowing from abroad, which brings us to our current foreign debt: "$5 trillion and counting," he says.

He said he is baffled by all the blame that has been piled on him. Since the recession, critics have said the increased money supply and low interest rates during his tenure at the Fed from 1987 to 2006 led to bubble investments. Mr. Greenspan first heard that theory, he says, in 2007, when John Taylor, a professor of economics at Stanford University who has advised Republicans, made the connection between easy money and the housing bubble. "It had absolutely nothing to do with the housing bubble," he says. "That's ridiculous."

Instead, he says Prof. Taylor's statement "served a lot of political purposes of people who have been picking on the Fed from both sides of the aisle." Mr. Greenspan wrote a rebuttal in a paper for the Brookings Institution, going through Prof. Taylor's points one by one. "I thought, that'll kill it," he remembers. "It didn't, because nobody read the paper."

Mr. Greenspan said he didn't press the issue because Prof. Taylor is a friend, but he had no idea how far Prof. Taylor's idea would go. "The trouble, unfortunately, with the argument is there's no evidence that happened, but he's won the battle, and his view is conventional wisdom," he says.

Prof. Taylor stands by the paper in which he presented the idea. "The paper provided empirical evidence…that unusually low interest rates set by the Fed in 2003-2005 compared with policy decisions in the prior two decades exacerbated the housing boom," he wrote in an email. Other economists have corroborated the findings, he added, and "the results are quite robust."

This disagreement is now the centerpiece of a long-running debate among economists, even inside the Fed today, that has yet to be resolved.

"I've always considered myself more of a mathematician than a psychologist," says Mr. Greenspan. But after the Fed's model failed to predict the financial crisis, he realized that there is more to forecasting than numbers. "It all fell apart, in the sense that not a single major forecaster of note or institution caught it," he says. "The Federal Reserve has got the most elaborate econometric model, which incorporates all the newfangled models of how the world works—and it missed it completely."

He says JP Morgan had put out a forecast three days before the crisis saying the economy was on the rise. And as late as 2007, the International Monetary Fund also said that global risk was declining. "A few days [after the crisis hit], I run into an article, and it is titled, 'Do we economists know anything?' " he says.

Mr. Greenspan set out to find his blind spot step by step. First he drew the conclusion that the nonfinancial sector of the economy had been healthy. The problem lay in finance, because of its vulnerability to spells of euphoria and irrational fear. Studying the results of herd behavior provided him with some surprises. "I was actually flabbergasted," he says. "It upended my view of how the world works."

He concluded that fear has at least three times the effect of euphoria in producing market gyrations. "I wouldn't have dared write anything like that before," he says.

Studying the minutiae of the events leading to the financial crisis brought to mind some lessons from his famous friendship, from the 1950s on, with the late Objectivist philosopher Ayn Rand. He says that Rand didn't influence him politically—he was always a libertarian—but she did point out tensions in his philosophy about life. "She caught me in contradictions, which shook me, and I said, 'My God, she is right,' " he says.

Mr. Greenspan then believed in analysis based mainly on hard science and empirical facts. Rand told him that unless he considered human nature and its irrational side, he would "miss a very large part of how human beings behaved." At the time they weren't discussing economics, but today he realizes the full impact of emotions and instincts on markets. He also has come to admire psychologist and Princeton University professor emeritus Daniel Kahneman's work applying psychological insights to economic theory, for which he won a Nobel Prize in 2002.

Mr. Greenspan won't say whether he has agreed with the decisions of current Fed chairman Ben Bernanke, but he will comment on the Fed's broader policies, which have become more aggressive since his time. "I'm not in favor of intervention, because markets so effectively function and work unless they are broken," he says. He did support TARP, the Troubled Asset Relief Program, because at the time the market needed sovereign credit during "the most debilitating financial crisis ever." But, he says, "eventually I think they carried the extent of what they did well beyond what was necessary."

With his new book, Mr. Greenspan hopes to provide politicians and the public with a road map to avoid making the same mistakes again. His suggestions include reducing entitlements, embracing "creative destruction" by letting facilities with cutting-edge technology displace those with low productivity, and fixing the political system by encouraging bipartisanship. He hasn't yet sent a copy to Janet Yellen, the nominee to be the next Fed chief. Though they are good friends, he says, "she and I don't agree on lots of things and never have, but I enjoy talking to her because she has arguments and logic behind it."

Mr. Greenspan often finds himself in the position of a middleman. Now one of the last prominent Washington figures to socialize across the partisan aisle, he says that these days, "politics is broke." He suggests that the last time the country's leadership was this divided was during the Civil War. And he doesn't see Wednesday's budget deal as a long-term breakthrough. Still, he was heartened that the government found a way to end the shutdown.

"I thought it was not a bad deal, all in all, considering how far along the whole thing got," he says. "That's not to say they solved anything fundamental."

September 3, 2013. (Romereports.com) Is it possible to have an economy that's not based on numbers, statistics or markets? It may seem impossible, but it's the dream of the Focolare movement and it welcomes the challenge. To achieve this, they have launched a School of Civil Economy which is an educational and research center dedicated to humanizing the economy.


GIANFRANCO FABI
Lead Columnist Il Sole24Ore
“It's a very concrete initiative, to create a new reality that will be a reference or at least it hopes to be a reference in the economic debate and in the in-depth study of the economy as a subject.”

The Focolare School of Civil Economy is near the italian city of Florence, and it will begin its classes in the upcoming months. Chiara Lubich, founder of the Focolare movement, always wanted a place where the economy of unity could be taught. An economy not based in merchandise but in solidarity.

LUIGINO BRUNI
School of Civil Economics
“It's a vision of the economy that is born from biodiversity: from uniting saints with humanists and Christian with Jewish roots....that is civil humanism. FLASH Civil Economy is not an industrial subject, it's a small piece of life where humanity, with all its passion and wishes is reflected.”

Even though it's leader-oriented, the Focolare School of Civil Economy is not a business school. It's a center dedicated to those with an interest in economy and want  to use it to improve society through ethical principles. It's an idea that was expressed by Pope Francis himself: to build a new economic system that doesn't revolve around monetary profits.