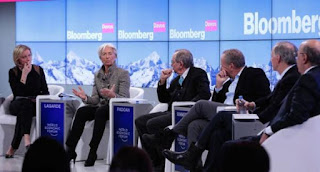 As we scoffed oveernight, who better than a handful of semi, and not so semi, billionaires - perplexed by the populist backlash of the past year - to sit down and discuss among each other how a "squeezed and Angry" middle-class should be fixed. And so it was this morning as IMF Managing Director Christine Lagarde, Italian Finance Minister Pier Carlo Padoan and Founder, Chairman and Co-CIO of Bridgewater Associates, Ray Dalio, espoused on what's needed to restore growth in the middle class and confidence in the future.

The conclusions of the discussion are as farcical as the entire Davos debacle, as three people completely disconnected from the real world, sat down and provided these "answers"...
As Bloomberg reports, while International Monetary Fund chief Christine Lagarde urged a list of policies from programs to retrain workers to more social spending...

Lagarde said policy makers “really have to think it through and see what can be done” given the feedback from voters who say "No.” Among measures that could be implemented are fiscal and structural reforms, she added.

The establishment academics also had plenty of textbook declarations and jabs to make...

“We need to go to a system where we are protecting workers, not jobs, and society will help people retrain or reorient,” Richard Baldwin, professor of international economics at the Graduate Institute of International and Development Studies in Geneva, said in an interview in Davos. “There may just be a need to man up. We have to pay for the social cohesion that we need to keep our societies advancing, and accept that this may be a higher tax burden on people.”

“Our President-elect has made four or five phone calls to four or five companies, largely suspending the rule of law, and extorting them into relocating dozens or perhaps even a few hundred jobs into plants in the United States,” Summers said.

Summers’s recipe for dealing with populism twisted Trump’s campaign slogan. “Our broad objective should be to make America greater than ever before,” Summers said. “That’s very different from making it great again.”

And ironically, the wealthiest of all the panel members was perhaps the clearest...

Hedge Fund billionaire Ray Dalio warned on a panel chaired by Bloomberg Television’s Francine Lacqua that “we may be at a point where globalization is ending, and provincialization and nationalization is taking hold.”

“I want to be loud and clear: populism scares me,” Dalio said. “The No. 1 issue economically as a market participant is how populism manifests itself over the next year or two.”

So, to sum up - a bunch of rich, disconnected elites in Switzerland believe the world's "middle class" will be better off if policy-makers "man-up" and increase taxes on the "wealthy" in order to redistribute wealth to the masses to "pay for social cohesion." Yeah, that will work... we suspect echoes of "Four more years" will be heard in 2020 if they follow that path.