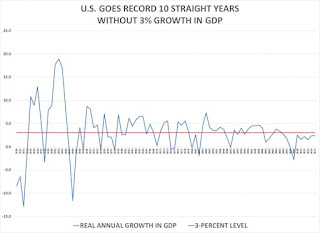 U.S. Has Record 10th Straight Year Without 3% Growth in GDP

By Terence P. Jeffrey | February 26, 2016 | 4:05 PM EST
(CNSNews.com) - The United States has now gone a record 10 straight years without 3 percent growth in real Gross Domestic Product, according to data released by the Bureau of Economic Analysis.
The BEA has calculated GDP for each year going back to 1929 and it has calculated the inflation-adjusted annual change in GDP (in constant 2009 dollars) from 1930 forward.
In the 85 years for which BEA has calculated the annual change in real GDP there is only one ten-year stretch—2006 through 2015—when the annual growth in real GDP never hit 3 percent. During the last ten years, real annual growth in GDP peaked in 2006 at 2.7 percent. It has never been that high again, according to the BEA.

The last recession ended in June 2009, according to the National Bureau of Economic Research. In the six full calendar years since then (2010-2015), real annual GDP growth has never exceeded the 2.5 percent it hit in 2010.
“The average growth rate for economic recoveries since the 1960s is 3.9 percent ranking the Obama recovery, with an average GDP growth rate of just 2.1 percent, among the slowest in history,” said Sen. Dan Coats (R.-Ind,), who chairs the Joint Economic Committee of the U.S. Congress.
Before this period, the longest stretch of years when real GDP did not grow by at least 3.0 percent, as calculatd by the BEA, was the four-year stretch from 1930 to 1933—during the Great Depression.
In addition to that four-stretch from 1930-1933, there have also been four three-year stretches where the real annual growth in GDP did not go as high as 3.0 percent. Those periods were 1945-1947 (in the immediate aftermath of World War II); 1956-1958; 1980-1982; and 2001-2003.
The longest consecutive stretch of years in which the United State saw real GDP grow by 3.0 percent or better was the seven year period from 1983-1989, during the presidency of Ronald Reagan.
The second longest stretch of years in which the U.S. saw real GDP grow by 3.0 percent or better was the six-year period from 1939 through 1944. (World War II started in Europe in 1939 and the U.S. entered the war in December 1941 when Japan attacked Pearl Harbor.)
In the last two years, annual growth in real GDP hit a plateau of 2.4 percent.
“Real GDP increase by 2.4 percent in 2015 (that is, from the 2014 annual level to the 2015 annual level), the same rate as in 2014,” the BEA said in the press release it put out today when it published its revised estimate for GDP growth in the fourth quarter of 2015.
In that quarter, according to today’s revised estimate, GDP increased at an annual rate of 1.0 percent.
In the Annual Report of the Council of Economic Advisers that President Obama sent to Congress this week, the administration noted that it is projecting real GDP to grow by only 2.7 percent this year and by less than that in the following two years.
“Real GDP is projected to grow 2.7, 2.5, and 2.4 percent during the four quarters of 2016, 2017, and 2018, respectively,” said the report.
Next week, the Joint Economic Committee will be holding a hearing on the president's economic report.
“Whether it is burdensome regulations, a broken tax code or a ballooning national debt, the Obama Administration’s policies are a dead weight on the economy,” said Sen. Coats. “Under this president, we continue to see stubbornly low workforce participation and historically high long-term unemployment rates.
“In order to boost GDP, we need to overhaul our tax code and strip away unnecessary government regulations to give employers the confidence they need grow their businesses and create new jobs. Congress can take action to help grow our economy, but we need a willing partner in the White House,” said Coats.
“On Wednesday,” said Coats, “I am chairing a JEC hearing on the President’s economic assessment, and we’ll hear from the Chairman of his Council of Economic Advisors, Jason Furman, on ways we can work together to improve economic growth.” 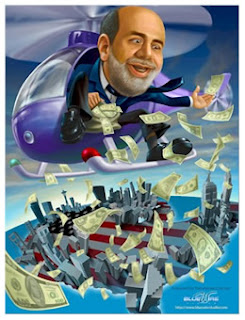 Submitted by Tyler Durden on 02/12/2016 11:30 -0500
2016 is shaping up to be the year that everyone finally comes to terms with the fact that the monetary emperors truly have no clothes.
To be sure, it’s been a long time coming. For nearly 8 years, market participants and economists convinced themselves that the answer was always “more Keynes.” Global trade still stagnant? Cut rates. Economic growth still stuck in neutral? Buy more assets.
It was almost as if everyone lost sight of the fact that if printing fiat scrip and tinkering with the cost of money were the answers, there would never be any problems. That is, policy makers can always hit ctrl+P and/or move rates around. But in order to resuscitate anemic aggregate demand and revive inflation, you need to tackle the core problems facing the global economy - not paper over them (and we mean “paper over them” in the most literal sense of the term).
Well late last month, central banks officially lost control of the narrative. Kuroda’s move into negative territory reeked of desperation andgiven the surging JPY and tumbling Japanese stocks, it’s pretty clear that the half-life on central bank easing has fallen dramatically.
And so, as the market wakes up from the punchbowl party with a massive hangover, everyone is suddenly left to contemplate “quantitative failure.” Below, courtesy of BofA's Michael Hartnett is a bullet point summary of 8 years spent chasing the dragon... and a list of the disappointing results.
*  *  *
From BofA
Whether the recent tipping point was the Fed hike, negative rates in Europe & Japan, or simply the growing market dislocations and macro misallocation of resources and wealth, the deflationary theme of “Quantitative Failure” is stalking the financial markets. A multi-year period of major policy intervention & “financial repression” is ending with weak economic growth & investors rebelling against QE.
In short, monetary policies of...
...have in 2016 led to a macro environment symbolized by...

and a significant impact on Wall Street...

*  *  *
What comes next is anyone's guess but with China's credit bubble about to burst in spectacular fashion, we wonder how central banks plan to combat the ensuing hit to the global economy. After all, their counter-cyclical policy room is not only exhausted, they've now taken the easing bias so far into the monetary twilight zone that in Japan's case, things are starting to backfire and are becoming self referential (see the recently canceled JGB auction).
Throw in the fact that $12.3 trillion in asset purchases has impaired liquidity across markets and you have the conditions for what could turn into a truly harrowing year not only for Wall Street, but for Main Street as well. The same Main Street that was allegedly saved by a "courageous" Ben Bernanke who started us all down this road 8 long years ago.
Postado por Pedro Erik Carneiro às 16:43 2 comentários: