For many on the left, Paul Ryan is a menace, the very embodiment of cold, indifferent Republicanism, and for many on the right, he is a knight in shining armor, a God-fearing advocate of a principled conservatism.

Mitt Romney's choice of Ryan as running mate has already triggered the worst kind of exaggerated hoo-hah on both sides of the political debate. What is most interesting, from my perspective, is that Ryan, a devout Catholic, has claimed the social doctrine of the Church as the principal inspiration for his policies. Whether you stand with First Things and affirm that such a claim is coherent or with Commonweal and affirm that it is absurd, Ryan's assertion prompts a healthy thinking-through of Catholic social teaching in the present economic and political context.

Ryan himself has correctly identified two principles as foundational for Catholic social thought, namely subsidiarity and solidarity. The first, implied throughout the whole of Catholic social theory but given clearest expression in Pope Pius XI's encyclical Quadragesimo Anno, is that in the adjudication of matters political and economic, a preferential option should be given to the more local level of authority.

For example, when seeking to solve a traffic-flow issue in a suburb, appeal should be made to the municipal authority and not to the governor, even less to the Congress or the President. Only when a satisfactory solution is not achieved by the local government should one move to the next highest level of authority, etc.

This principle by no means calls into question the legitimacy of an over-arching federal power (something you sense in the more extreme advocates of the Tea Party), but it does indeed involve a prejudice in favor of the local. The principle of subsidiarity is implied in much of the "small is beautiful" movement as well as in Tolkien's Lord of the Rings, which exhibits a steady mistrust of imperial power and a steady sympathy for the local, the neighborhood, the small business.

Now in Catholic social theory, subsidiarity is balanced by solidarity, which is to say, a keen sense of the common good, of the natural and supernatural connections that bind us to one another, of our responsibility for each other. I vividly remember former New York Governor Mario Cuomo's speech  before the Democratic National Convention in San Francisco in 1984, in the course of which he effectively lampooned the idea that individual self-interest set utterly free would automatically redound to the general welfare.

Catholic social thought does indeed stand athwart such "invisible hand" theorizing. It also recognizes that, always in accord with subsidiarity, sometimes the federal and state governments are the legitimate vehicles by which social solidarity is achieved. Does anyone today, outside of the most extreme circles, really advocate the repeal of Social Security, unemployment compensation, medical benefits for the elderly, food stamp programs, etc.?

Solidarity without subsidiarity can easily devolve into a kind of totalitarianism whereby "justice" is achieved either through outright manipulation and intimidation or through more subtle forms of social engineering. But subsidiarity without solidarity can result in a society marked by rampant individualism, a Gordon Gekko "greed is good" mentality, and an Ayn Rand/Nietzschean "objectivism" that positively celebrates the powerful person's dominance of the weak.

Catholic social theory involves the subtle balancing of these two great principles so as to avoid these two characteristic pitfalls. It does, for example, consistently advocate the free market, entrepreneurial enterprise, profit-making; and it holds out against all forms of Marxism and extreme socialism. But it also insists that the market be circumscribed by clear moral imperatives and that the wealthy realize their sacred obligation to aid the less advantaged. This last point is worth developing.

Thomas Aquinas teaches that ownership of private property is to be allowed but that the usus (the use) of that privately held wealth must be directed toward the common good. This is because all of the earth and its goods belong, finally, to God and must therefore be used according to God's purpose. Pope Leo XIII made this principle uncomfortably concrete when he specified, in regard to wealth, that once the demands of necessity and propriety have been met, the rest of what one owns belongs to the poor. And in saying that, he was echoing an observation of John Chrysostom: " If you have two shirts in your closet, one belongs to you; the other belongs to the man who has no shirt."

In his wonderful Orthodoxy, written over a hundred years ago but still remarkably relevant today, G.K. Chesterton said that Catholicism is marked  through and through by the great both/and principle. Jesus is both divine and human. He is not one or the other; nor is he some bland mixture of the two; rather, he is emphatically one and emphatically the other. In a similar way, the Church is radically devoted to this world and radically devoted to the world to come. In the celibacy of its priests, it is totally against having children, and in the fruitful marriage of its lay people, it is totally for having children.

In its social teaching, this same sort of "bi-polar extremism" is on display. Solidarity? The Church is all for it. Subsidiarity? The Church couldn't be more enthusiastic about it. Not one or the other, nor some bland compromise between the two, but both, advocated with equal vigor. I think it would be wise for everyone to keep this peculiarly Catholic balance in mind as the debate over Paul Ryan's policies unfolds. 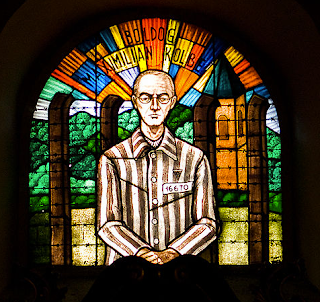 August 14, 2012. (Romereports.com) August 14 is the feast day of St. Maximilian Maria Kolbe. His given name was Raymond but upon entering the Franciscan seminary he changed it to Maximilian. He was born in the small Polish village of Zdunska Wola on January 8, 1894.

He is admired for the heroic gesture of offering his life to save the life of a parent. It happened on August 3, 1941 at the Auschwitz concentration camp when a prisoner escaped, ten others were sentenced to death. Seeing that one of those sentenced to die was a father, Maximilian volunteered to take his place. His request was granted and was sentenced to death by starvation. He died on August 14, 1941.

The father that was saved by Maximilian noted that he “not only died a saint, but also lived as a saint”. During his last days spent in prison, Maximilian still found a way to celebrate Mass.

In 1917 he launched the “Militia of the Immaculate,” an association of the faithful dedicated to his return to Poland. He also helped create different magazines as well as two religious communities known as “cities of the Immaculate,” one in Poland and one in Japan.
He was a saint, who as John Paul II once said, “did not suffer in death, but gave the gift of life”.

The New York State Department of Financial Services said that the bank hid 60,000 secret transactions for "Iranian financial institutions" that were subject to US economic sanctions.
It labelled UK-based Standard Chartered a "rogue institution".
The bank has been threatened with having its US banking licence revoked.
The allegations are far larger than those involving HSBC, which was recently accused by the US Senate of failing to prevent money laundering from countries around the world including Mexico and Iran. It has set aside $700m to deal with any fines and penalties arising from those allegations.
The bank is ordered to appear before the regulator soon to "explain these apparent violations of law" from 2001 to 2010.
The regulator also said that it would hold a formal hearing over the "assessment of monetary penalties".
"If the allegations are proven true, it does show there was a systematic policy in place to strip these wires of the necessary information," Farhad Alavi, a lawyer at BHFA Law Group in Washington DC, told the BBC.
"Because the transactions have to pass through the US [because they are in US dollars] this is one area where the US can exert its power."

The regulator also said it had uncovered evidence with respect to what are apparently similar schemes to conduct business with other countries under sanctions - Libya, Burma and Sudan.

"Investigation of these additional matters is ongoing," it added.
The regulator said that its nine-month probe, which involved looking through more than 30,000 pages of documents, including internal Standard Chartered Bank (SCB) emails, showed that the bank reaped "hundreds of millions of dollars in fees".
"SCB's actions left the US financial system vulnerable to terrorists, weapons dealers, drug kingpins and corrupt regimes, and deprived law enforcement investigators of crucial information used to track all manner of criminal activity," it said.

The bank was also accused of falsifying SWIFT wire payment directions by stripping the message of unwanted data that showed the clients were Iranian, replacing it with false entries.
Senior management were also said to have codified their illegal procedures in formal operating manuals, including one labelled "Quality Operating Procedure Iranian Bank Processing".
"It provided step-by-step wire stripping instructions for any payment messages containing information that would identify Iranian clients," the complaint said.
In numerous emails going back as far as 1995, the bank's lawyers advised on ways to go about circumventing US sanctions.
In March 2001, Standard Chartered's legal advisor counselled that "our payment instructions [for Iranian clients] should not identify the client or the purpose of the payment".
By 2006, there were concerns raised about the bank's conduct in its New York branch.
The chief executive for the Americas sent an email to London saying the programme needs to "evaluate if its returns and strategic benefits are... still commensurate with the potential to cause very serious or even catastrophic reputational damage to the group".
But those warnings were ignored by senior management in London in what the regulator called a "staggering cover-up".
'Obvious contempt' Iran has been subject to US economic sanctions since 1979, and the laws were toughened by Executive Orders signed by President Bill Clinton in 1995 over US dollar transactions with Iran.
The US-dollar transactions in question originated and terminated in European banks in the UK and the Middle East, and were cleared through its New York branch, the complaint said.

Among the violations of the law, the bank is accused of:
In the 27-page complaint, the New York State Department of Financial Services said that Standard Chartered showed "obvious contempt for US banking regulations" and pointed to an email reply from a bank executive director to a New York branch officer.
"Who are you [Americans] to tell us, the rest of the world, that we're not going to deal with Iranians," the complaint quotes the director as saying.
Standard Chartered said: "The group is conducting a review of its historical US sanctions compliance and is discussing that review with US enforcement agencies and regulators.
"The group cannot predict when this review and these discussions will be completed or what the outcome will be."
The US Treasury, which implements the sanctions, said that it "treats sanctions violations extremely seriously".