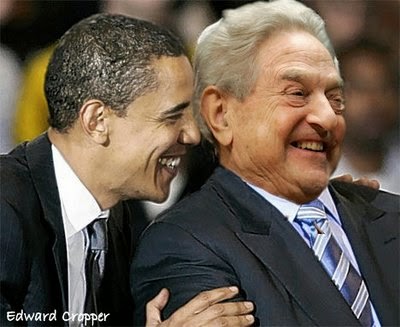 Submitted by Tyler Durden on 04/30/2015 09:25 -0400
“You support President Obama’s proposal to increase taxes on the wealthy?” That was the question put to George Soros on CNN some three years ago. Here was his answer:
“Yes, very much… the super bubble really resulted in creating a great increase in inequality, and now we have the after effect where you have slow growth, but if you could have better distribution of income, then the average American would actually be better off.”
There’s no question that “everyday Americans” (as a reminder, those are the people Hillary Clinton wants to help by running for president… well, those people and perhaps a few foreign governments and any investment bank who is willing to pay her husband six figures for a speech) would be better off if they got a larger piece of the pie, but as we’ve seen over the past several months, that’s not likely to happen as wage growth declines for the 80% of American workers classified by the BLS as “non-supervisory” even as the country’s supervisors see their pay increase, and as Fed policy continues to inflate the assets most likely to be concentrated in the hands of the wealthy. As this sad reality continues to play itself out destroying the American Middle Class in the process, we wondered if Soros was doing his best to ameliorate the situation by redistributing more of his vast wealth to the very same “average Americans” about which he expressed so much concern in 2012. The short answer: no.
Via Bloomberg:
George Soros likes to say the rich should pay more taxes. A substantial part of his wealth, though, comes from delaying them. While building a record as one of the world’s greatest investors, the 84-year-old billionaire used a loophole that allowed him to defer taxes on fees paid by clients and reinvest them in his fund, where they continued to grow tax-free. At the end of 2013, Soros—through Soros Fund Management—had amassed $13.3 billion through the use of deferrals, according to Irish regulatory filings by Soros…

Congress closed the loophole in 2008 and ordered hedge fund managers who used it to pay the accumulated taxes by 2017. A New York-based money manager such as Soros would be subject to a federal rate of 39.6 percent, combined state and city levies totaling 12 percent, and an additional 3.8 percent tax on investment income to pay for Obamacare, according to Andrew Needham, a tax partner at Cravath, Swaine & Moore. Applying those rates to Soros’s deferred income would create a tax bill of $6.7 billion…

When Soros founded his firm, nothing in U.S. law prevented money managers from postponing the acceptance of client fees and letting the money remain in their funds, where it could grow untaxed. But doing so wasn’t really an option for funds based in the U.S., because if managers didn’t take the fees, their clients wouldn’t be able to deduct them from their own taxable income.

Hedge fund managers could circumvent this obstacle by setting up parallel offshore funds for investors who weren’t subject to U.S. taxes and who therefore didn’t care whether their fund manager deferred taxes on the fees. That way, the fees—typically 2 percent of the amount invested and 20 percent of any profits—plus any investment gains, could grow without being taxed until the managers withdrew the money…

A manager with Soros’s track record who started with $12 million from investors, took 20 percent of the profits, and reinvested that money tax-free over 40 years, would end up with $15.9 billion. If that same manager paid federal, state, and local taxes on the fees and related investment gains before reinvesting them, the figure would shrink to $2.4 billion…
Here’s the simple math:

In the end, it would appear that we simply have yet another case of billionaire hypocrisy: "please raise taxes on all the uber-wealthy... except me."
Postado por Pedro Erik Carneiro às 08:08 Um comentário: 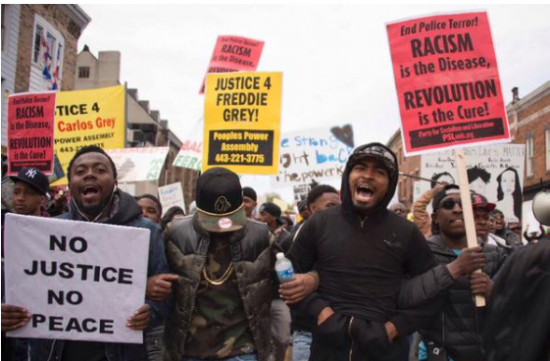 The family asked specifically to stop the protests for today because of the funeral. Great respect they’re showing for the man for whom they say they’re ‘protesting’.
—-
CNN journalist injured: 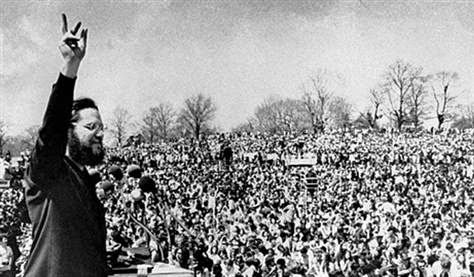 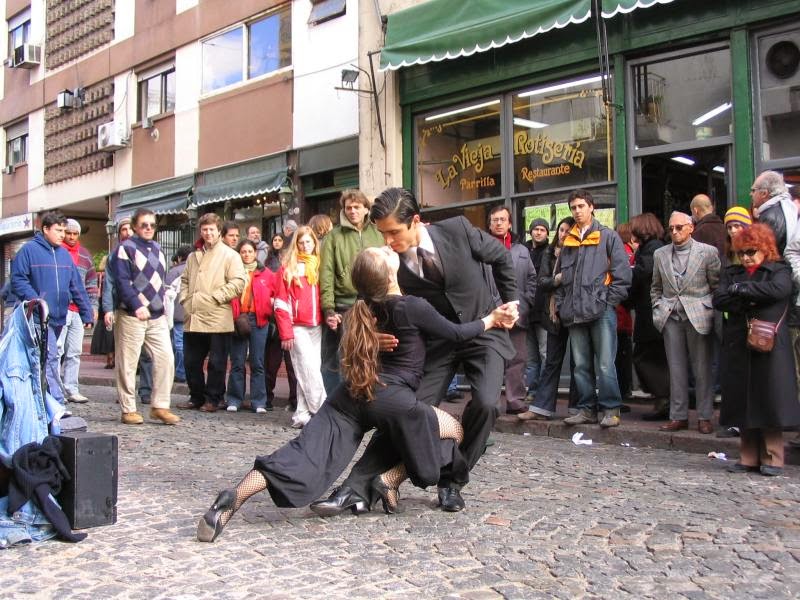 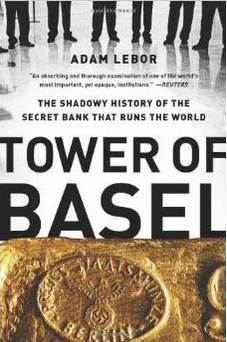 First unofficial meeting of the BIS Board of Directors in Basel, April 1930
* * *
The following is an excerpt from TOWER OF BASEL: The Shadowy History of the Secret Bank that Runs the World by Adam LeBor.  Reprinted with permission from PublicAffairs.
The world’s most exclusive club has eighteen members. They gather every other month on a Sunday evening at 7 p.m. in conference room E in a circular tower block whose tinted windows overlook the central Basel railway station. Their discussion lasts for one hour, perhaps an hour and a half. Some of those present bring a colleague with them, but the aides rarely speak during this most confidential of conclaves. The meeting closes, the aides leave, and those remaining retire for dinner in the dining room on the eighteenth floor, rightly confident that the food and the wine will be superb. The meal, which continues until 11 p.m. or midnight, is where the real work is done. The protocol and hospitality, honed for more than eight decades, are faultless. Anything said at the dining table, it is understood, is not to be repeated elsewhere.
....
Those discussions, say central bankers, must be confidential. “When you are at the top in the number one post, it can be pretty lonely at times. It is helpful to be able to meet other number ones and say, ‘This is my problem, how do you deal with it?’” King continued. “Being able to talk informally and openly about our experiences has been immensely valuable. We are not speaking in a public forum. We can say what we really think and believe, and we can ask questions and benefit from others.” 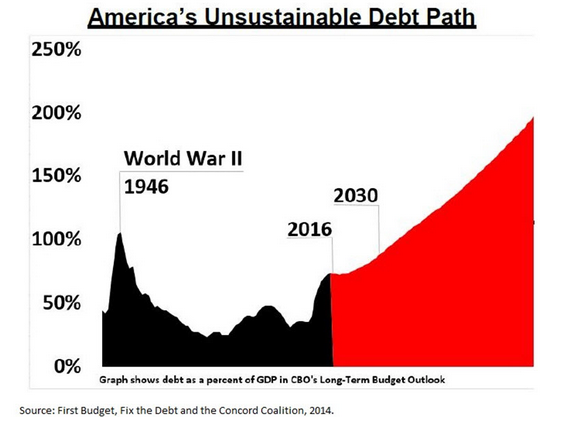 The federal debt is worse than you think

Of all the failures of recent Congresses and Presidents, none is more important than their failure to deal with the nation's long-term debt. Although Congress tied itself in knots trying to address the problem, the growth of debt remains, in the words of the Congressional Budget Office, "unsustainable."
Debt figures tell part of the story. When the Great Recession hit, the federal debt was equal to about 40 percent of GDP. But to fight the recession, Congress enacted an $800 billion dollar stimulus bill. Stimulus spending, combined with already enacted spending and tax policy, resulted in four years of trillion dollar deficits. As a result, the debt ballooned to 78 percent of GDP in 2013, almost twice the pre-recession level. The annual deficit is now declining at a stately pace, but by 2016 it will begin increasing again, and by 2020 under CBO's alternative fiscal scenario, we will once again return to annual deficits above a trillion dollars, thereby once again greatly increasing the national debt.
What's the word for our fiscal situation? Stunning? Shocking? Desperate? In recent testimony before the Senate Budget Committee, Boston University Economics Professor Laurence Kotlikoff, in effect, told the Committee that all of these terms are pathetically inadequate to describe our true fiscal situation. In compelling testimony, Kotlikoff argues that the federal fiscal situation is much worse than the CBO estimates let on. The reason is that CBO's debt estimates do not take into account the full financial obligations the government is committed to honor, especially for future payments of Social Security, Medicare, and interest on the debt. He asserts that the federal government should help the public understand the nation's true fiscal situation by using what economists call "the infinite-horizon fiscal gap," defined as the value of all projected future expenditures minus the value of all projected future receipts using a reasonable discount rate.
What difference does the fiscal gap approach make in our understanding of the true federal debt? CBO tells us that the national debt was a little less than $13 trillion in 2014. But the fiscal gap in that year as calculated by Kotlikoff was $210 trillion, more than 16 times larger than the debt estimated by CBO and already judged, by CBO and many others, to be unsustainable.
Kotlikoff goes on to illustrate that the fiscal gap is increasing at an alarming rate and that delay makes our problem much worse. In 2003, just a little more than a decade ago, the fiscal gap was $60 trillion. But by last year it had catapulted to $210 trillion. 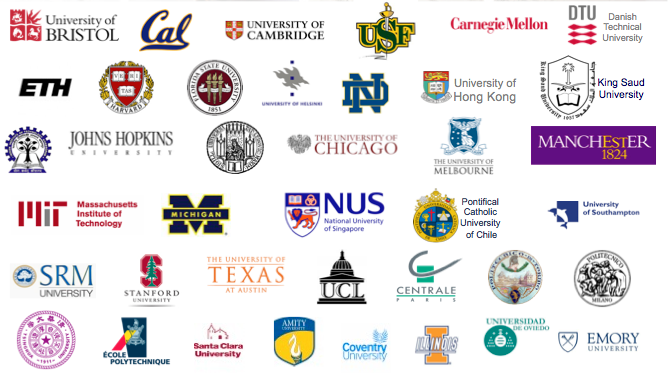 
The Modern University Is Failing Students in Every Respect

Modern American universities used to assume four goals.
First, their general education core taught students how to reason inductively and imparted an aesthetic sense through acquiring knowledge of Michelangelo, the Battle of Gettysburg, “Medea” and “King Lear,” Beethoven’s “Ode to Joy,” and astronomy and Euclidean geometry.
Second, campuses encouraged edgy speech and raucous expression — and exposure to all sorts of weird ideas and mostly unpopular thoughts. College talk was never envisioned as boring, politically correct megaphones echoing orthodox pieties.
Third, four years of college trained students for productive careers. Implicit was the university’s assurance that its degree was a wise career investment.
Finally, universities were not monopolistic price gougers. They sought affordability to allow access to a broad middle class that had neither federal subsidies nor lots of money.
The American undergraduate university is now failing on all four counts.
A bachelor’s degree is no longer proof that any graduate can read critically or write effectively. National college-entrance-test scores have generally declined the last few years, and grading standards have as well.
Too often, universities emulate greenhouses where fragile adults are coddled as if they were hothouse orchids. Hypersensitive students are warned about “micro-aggressions” that in the real world would be imperceptible.
Apprehensive professors are sometimes supposed to offer “trigger warnings” that assume students are delicate Victorians who cannot handle landmark authors such as Joseph Conrad or Mark Twain.
“Safe spaces” are designated areas where traumatized students can be shielded from supposedly hurtful or unwelcome language that should not exist in a just and fair world.
...
The collective debt of college students and graduates is more than $1 trillion. Such loans result from astronomical tuition costs that for decades have spiked more rapidly than the rate of inflation.
Today’s campuses have a higher administrator-to-student ratio than ever before. Those who actually teach are now a minority of university employees. Various expensive “centers” address student problems that once were considered either private matters or well beyond the limited resources of the campus.
Is it too late for solutions?
For many youths, vocational school is preferable to college. Americans need to appreciate that training to become a master auto mechanic, paramedic, or skilled electrician is as valuable to society as a cultural-anthropology or feminist-studies curriculum.
There are far too many special studies courses and trendy majors — and far too few liberal-arts surveys of literature, history, art, music, math, and science that for centuries were the sole hallowed methods of instilling knowledge.
Administrators should decide whether they see students as mature, independent adults who handle life’s vicissitudes with courage and without need for restrictions on free expression. Or should students remain perennial weepy adolescents, requiring constant sheltering, solicitousness, and self-esteem building?
Diversity might be better redefined in its most ancient and idealistic sense as differences in opinion and thought rather than just variety in appearance, race, gender, or religion.
A national standardized exit test should be required of all graduates. If colleges predicate admissions in part on performance on the SAT or ACT, they certainly should be assessed on how well — or not so well — students score on similar tests after years of expensive study.
Finally, the federal government should hold universities fiscally accountable. The availability of federal grants should be pegged to a college’s ability to hold annual tuition increases to the rate of inflation.
At this late date, only classically liberal solutions can address what have become illiberal problems.
Postado por Pedro Erik Carneiro às 11:17 Nenhum comentário: