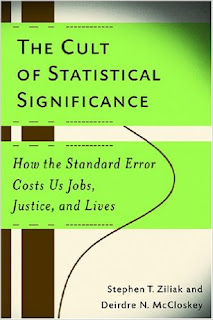 WHY MOST OF THE STUDIES YOU READ ABOUT ARE WRONG


Stephen Ziliak of Roosevelt University and Deirdre McCloskey of University of Illinois at Chicago have done the world of academic research the greatest, but least welcome, of favors. In their book, The Cult of Statistical Significance, in their own journal articles, and in the forthcoming Oxford Handbook of Professional Economic Ethics, they’ve meticulously gone through many thousands of journal articles and subjected them to scrutiny as to the soundness of statistical methods. Their survey uncovered an epidemic. Depending on the science of the journal (economics, medicine, psychology, or other) and the type of statistical abuse (use of sampling techniques where no samples have been taken, omission of definition of the unit of the metric tested, misinterpretation of the definition of ‘statistically significant’, absent of any information describing the magnitude of the effects, etc.) somewhere between 8 and 9 out of every 10 journal articles in the leading journals of science have serious flaws in their use of statistics. In that sense, the results of articles published in the likes of theAmerican Economic Review and New England Journal of Medicine are not just wrong in their statistical logic; they are worse than wrong, lacking enough statistical coherence and common sense interpretation of causes and effect sizes to even know what the reasonable conclusions are and how to evaluate them.
A lot of this is non-debatable. Statisticians know the rules: sampling methods are for situations in which there is sampling. P values—the most commonly used index for determining the “statistical significance” of a result—do not measure the probability that the theory is right nor do they tell the practical importance of the result, not even close.  Researchers should tell us the actual effects of a drug or fertilizer or economic policy in a clearly defined unit in a clearly defined unit. If a researcher tells us that unemployment goes down when the government increases stimulus spending, they should start by telling us how they are measuring unemployment and how much it changes with X% more stimulus: in hours worked? Minutes worked? Millions of people employed? Thousands…hundreds…tens? How much? When they tell us that some particular stock or bond characteristic causes higher returns, how much higher? When they say they are adding or reducing risk, how much risk, measured how? Statistics professors know that business and medical research students often get just enough information from their classes to be dangerous, enough to calculate ‘statistical significance at the 95% level’, but not enough to know what that actually means, what it proves and what it never can prove. FiveThirtyEight recently asked several prominent academics, on camera, to explain the P value. The results were less than confidence-inspiring, no matter what one’s confidence interval.


The p-value is saying something else.  It says ‘assuming that there’s no difference between the two weight loss pills or the two barley yields, what’s the probability of seeing a difference larger than the difference we’ve actually observed in the data?’
...
Postado por Pedro Erik Carneiro às 17:07 Nenhum comentário: