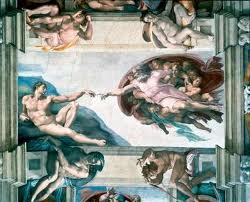 Imagine someone appealing to Lord Baden-Powell, founder of the Boy Scouts, to justify the activities of gangs in Los Angeles. Why not?  Lord Baden-Powell wanted boys to do risky things, and what’s more dangerous than running guns or smuggling cocaine or fighting another gang in a shooting spree?  He enjoined upon the Scouts a stern code of honor and loyalty, and who is more loyal than a new recruit for the Crips?  Who is more willing to shed his blood for the honor of the gang?

Imagine someone appealing to Michelangelo to justify porn.  Why not?  Michelangelo painted nudes all over the Sistine Chapel, and Hustler and Penthouse are full of nudes.  Michelangelo endured the disgruntlement of the prudish, so that the figures in his Last Judgment were later provided with discreet veils and tunics and loincloths.  And aren’t Hustler and Penthouse stuck underneath the counter at convenience stores?  Michelangelo admired the sculpture of ancient Greece; those ancient Greeks, for their part, traded in vases depicting acts of pedophilia.  So why should a busy stockbroker in a hotel not be allowed to relax in front of a television, watching whatever delights his sophisticated tastes?

Imagine a lawyer returning his fee when he loses a case; imagine a television pundit suddenly admitting that he doesn’t know what he is talking about; imagine a Hollywood starlet speaking English; imagine the Cubs winning the World Series; imagine anything most absurd, and you have not yet approached the absurdity of those who claim that Catholic Social Teaching implies the existence of a vast welfare state, bureaucratically organized, unanswerable to the people, undermining families, rewarding lust and sloth and envy, acknowledging no virtue, providing no personal care, punishing women who take care of their children at home, whisking the same children away from parental supervision and into schools designed to separate them from their parents’ views of the world, and, for all that, keeping whole segments of the population mired in a cycle of dysfunction, moral squalor, and poverty, while purchasing their votes with money squeezed by force from their neighbors.

I’m sick of it.  I’m sick of hearing that Catholic teaching regarding sex and marriage is one thing, in that old-fashioned trinket box over there, while Catholic teaching regarding stewardship and our duties to the poor is another thing, on that marble pedestal over here.  I’m sick of hearing that Catholic teaching regarding the Church and her authority is one thing, the embarrassing Latinate red-edged tome tucked away in that closet, while Catholic teaching regarding the laity is another, and pass that bread this way!  No, it is all of a piece.  What the Church says about divorce is inextricable from what she says about the poor.  What she says about the presence of Christ in the Eucharist is inextricable from what she says about the respects in which all men are created equal—and the many respects in which she insists upon a salutary inequality.  When we fail to see the integrity of the faith, not only do certain truths escape our notice; the rest, the truths we think we see, grow monstrous, like cancers, and work to destroy the flesh they once seemed to replace.
Pope Leo XIII is credited as being the founder of Catholic Social Teaching.  He would have been appalled by the credit.  He intended nothing other than to apply to current concerns what Jesus taught his apostles and what they handed down to their successors.  His thoughts prescind not from the nature of the spanking new modern state, nor from social advances sometimes more apparent than real, but from the changeless nature of man, discoverable both by reason and by humble attention to the revealed word of God.  Leo never supposed that one could devise any Social Teaching without understanding what a society is to begin with, which requires that we understand what human beings are, and why they are—for what end God made them, male and female, in His image and likeness.  Leo surveys the world from the mountaintop of the faith—not from the mercurial ingenuity of a vain scholar, or the meddlesome pride of an innovator.

In this series, I shall discuss exactly what Pope Leo XIII had to say, when the name of “socialism” first burst upon the ear, and apply it to current controversies and miseries.  His words sting like the first antiseptics, carbolic acid and iodine.  They sting, but they cleanse.  Or perhaps we should prefer to lay honey to our wounds?

Let’s begin at the beginning, with Inscrutabili (1878).  Here Leo inveighs against a radical secularism which seeks, by calumny, to bring the Church of God into odium, resulting in laws that obstruct bishops in their duties, and confiscate “property that was once the support of the Church’s ministers and of the poor.”  That confiscation detaches “public institutions, vowed to charity and benevolence, … from the wholesome control of the Church.”  Leo sees the connection between this seizure and a spreading amoralism among the young, whose education is also removed from the Church’s purview.

Don’t suppose that the Pope is merely grumbling.  He knows that one cannot build anything upon the secularist sands: “It is perfectly clear and evident, Venerable Brothers, that the very notion of a civilization is a fiction of the brain if it rest not on the abiding principles of truth and the unchanging laws of virtue and justice, and if unfeigned love knit not together the wills of men, and gently control the interchange and the character of their mutual service.”

Let’s pause a moment, catch our breath, and think hard about what he’s just said.  Catholics often hear that we intend to “impose our morality” upon our neighbors, and that this can’t be done in a truly free, that is to say thoroughly secular society.  Set aside the plain fact that all law imposes a moral vision, though it is seldom consistent or adequate, and it is sometimes perverse.  The fact is, morality admits no peculiar possessives.  If a morality is only mine, it isn’t morality but meaningless predilection.  Either a moral law exists, applying to everyone at all times, or it doesn’t.  If it doesn’t, there is no moral reason to prefer civilization to savagery; the latter can be a lot more fun.  But we won’t have that choice anyway, because we will lose civilization itself.  What we now call “civilization” and “culture,” Pope Leo calls “a fiction of the brain,” a vain idea, when the reality is gone.

That loss of morality understood as what we receive, not what we create; not what shackles us, but what sets us free to realize our human potential, implies already the loss of “unfeigned love” which should knit together “the wills of men, and gently control the interchange and the character of their mutual service.”  We must insist upon this connection.  I cannot give amoral love.  But human beings need love; they need the love that brings them deeper into the truth.

An unmarried friend of mine is with child.  That’s not good.  But the child needs love, and the mother and father need to return to a world of moral law—the real world, not the fantasy islands of hedonism.  They too need love.  That’s where the Church and the faithful Christian come in.  So we do, if we’re given half a chance!  It is calumny to say that we care only about fetuses and not about families.  But the secular state cares for neither.  The secular state is an amoral cash extractor and dispenser.  If the mother repeats the wrong, more money comes.  If she and the father try to right the wrong by marrying, they risk losing the money.  She can leave the child fatherless and, most of the day, motherless by going to work, and the state will pay.  None of this is oriented towards virtue.  Therefore none of it is really social; no more than rust is steel.

Does Catholic Social Teaching mandate such a thing?  Do architects build with rust?