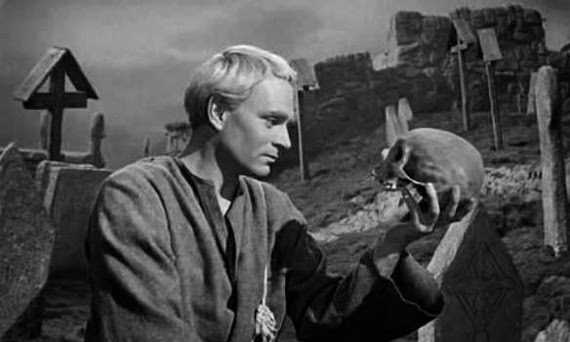 
In the cosmic struggle between good and evil, Shakespeare presents the relentless conflict between two philosophies that shape the human condition. The philosophy of Claudius, the usurping tyrant who secretly poisoned his brother King Hamlet and married his wife Queen Gertrude, assumes that might is right, man is a god, and the end justifies the means. The philosophy of Hamlet, the noble prince of Denmark, acknowledges that justice is divine and eternal in origin, that man is the servant and creature of God, and that one cannot do evil to achieve good. Claudius has no more qualms about killing Hamlet than in murdering the king. Suspicious that Hamlet knows the truth about the foul murder and wary by the danger Hamlet poses, Claudius schemes to send Hamlet to England under the pretext of a change of scenery to cure him of melancholy over his father’s death. Traveling with two so-called former friends from the university, Rosencrantz and Guildenstern, Hamlet discovers a packet of letters ordering his execution in England. Claudius, the master Machiavellian, plots, lies, and kills with the brutality of the lion and the cunning of the fox. He is the godlike arbiter of life and death, and he is determined to rape Fortune for his selfish ambitions.
Sensing that “something’s rotten in the state of Denmark” and that his uncle’s hasty marriage to his mother a month after the funeral hints of foul play, Hamlet’s conscience urges him to seek justice and avenge the death of his father. King Hamlet’s ghost keeps appearing to exhort the prince to do his moral duty. Hamlet, however, cannot merely trust the voice of the ghost, especially if it is a not an “honest” ghost but a demon from hell. Hamlet cannot wantonly kill Claudius at the slightest opportunity even though such a moment presents itself when the king appears contrite and in prayer. Hamlet cannot do evil to achieve good. He cannot assassinate the king, blindly trust the voice of the ghost, or commit suicide. Hamlet’s Catholic conscience will not be violated. Revenge and despair are sins.
These immoral acts of revenge, rash judgment, and “self-slaughter” violate Christian teaching and debase Hamlet. In a quandary of self-examination and introspection Hamlet ponders the moral crisis he suffers....
In the inevitable clash between these two world views, Claudius assumes he wields absolute control and holds Hamlet’s life in his hands. Even though his first artful plot to have Hamlet executed in England is foiled by Hamlet’s sleeplessness during the night when he awakes and “rashly” opens the packets with the order for his death (“And praised be rashness for it”), Claudius devises two other stratagems to eliminate Hamlet. For the diversion of the court he proposes a dueling match between Hamlet and Laertes, a contest in which Laertes’ rapier is poisoned at the tip to deal a fatal blow from even the slightest scratch. Even more deviously Claudius also puts poison in the chalice of Hamlet’s cup that he will drink for refreshment. For all his imaginary omniscience and infallibility Claudius, however, is not in total control of events despite his Machiavellian boldness and craftiness. In the skirmish between the two fencers, Laertes and Hamlet drop their swords and accidentally take the other’s rapier. During the intermission Queen Gertrude randomly picks the poisoned chalice by mistake and begins drinking. In the aftermath of these unforeseen accidents and surprises, it is not only Hamlet who dies but also Claudius, Laertes, and Gertrude as Claudius’ plots ensnare him. The king whose lethal weapon is poison is “hoist[ed] by his own petard.” The scheming Claudius discovers that might is not right, man is not god, man does not dictate the future, and the end does not justify the means.
...
When man acts with moral courage and seeks justice rather than revenge and when he suffers injustices rather than inflicting evil, he sees the hand of God. Because Hamlet miraculously escaped from death on the ship, he fearlessly returns to Denmark and boldly accepts Claudius’s proposal for the fencing match, despite Horatio’s warning of possible treachery (“You will lose, my lord”). In his hatred of evil and in his trust in Divine Providence, Hamlet does not fear death as he enters the fencing match: “We defy augury. There is a special providence in the fall of a sparrow. If it be not now, ‘tis not to come; if it be not to come, it will be now; if it be not now, yet it will come. The readiness is all.” At the end of the play Hamlet is no longer reacting to events, passively suffering misfortunes, or submitting to despair but acting against them like the valiant prince he is—man created in God’s image, not man as God or man as nothing but the true Christian image of man Hamlet describes in his famous words: “What a piece of work is man! How noble in reason! How infinite in faculty! In form and moving how express and admirable! In action how like an angel.”
Postado por Pedro Erik Carneiro às 07:50