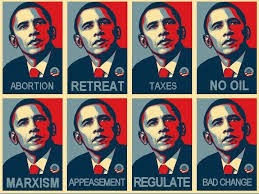 Hands down Obama is the worst president since WWII: poll

Poll after poll shows President Obama’s approval rating dipping recently, and one new Quinnipiac University Poll finds that voters say Mitt Romney would have been a better choice in 2012.
With Mr. Obama deploying military troops to Iraq, failing to find compromise with Congress and seeing major defeats in the Supreme Court, voters continue to sour on him.

Quinnipiac found 45 percent of voters say the country would have been better off if Mr. Romney, the 2012 GOP nominee, had been elected, while just 38 percent say Mr. Obama remains a better choice. Even Democrats aren’t so sure — just 74 percent of them told the pollsters Mr. Obama was clearly the better pick in the last election.

Voters also rate him the worst president since World War II, topping even his predecessor, President George W. Bush, who had left office with terrible ratings.

“Over the span of 69 years of American history and 12 presidencies, President Barack Obama finds himself with President George W. Bush at the bottom of the popularity barrel,” said Tim Malloy, assistant director of the Quinnipiac University Poll.

Nearly half of voters told the Zogby poll that Mr. Obama is “unable to lead the country.”