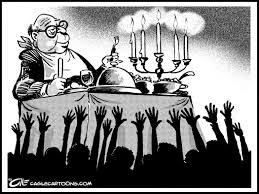 Only Rich Know Wage Gains With No Raises for U.S Workers

Call it the no-raises recovery: Five years of economic expansion have done almost nothing to boost paychecks for typical American workers while the rich have gotten richer.
Meager improvements since 2009 have barely kept up with a similarly tepid pace of inflation, raising the real value of compensation per hour by only 0.5 percent. That marks the weakest growth since World War II, with increases averaging 9.2 percent at a similar point in past expansions, according to Bureau of Labor Statistics data compiled by Bloomberg.
Federal Reserve Chair Janet Yellen has zeroed in on faster wage growth as an important milestone for declaring the job market healed and ready to withstand policy tightening, even as other labor measures improve. Stagnant earnings also explain an economy that’s having trouble sustaining a rebound in housing and consumer spending, according to David Blanchflower, a professor of economics at Dartmouth College in Hanover, New Hampshire.
“The bottom line is, we’re a million miles from full employment,” said Blanchflower, a Bank of England policy maker from 2006 to 2009. “Workers are struggling, and they don’t see signs that things are suddenly going to change.”

Households in the top 20 percent of U.S. socioeconomic groups saw their incomes grow by an average of $8,358 a year from 2008 to 2012, compared with a $275 annual decline for the lowest 20 percent, according to data from the Bureau of Labor Statistics.

The discrepancy gained visibility after publication of French economist Thomas Piketty’s bestseller “Capital in the Twenty-First Century.” It catalogs the widening global inequality between the rich and everyone else, and has sparked worldwide debate about imbalances in wealth and income.

In the U.S., stagnant wages are linked to a question puzzling economists and policy makers alike: How many able and willing workers still are waiting on the sidelines? The issue may be among topics Yellen and other central bankers discuss this week at their annual symposium in Jackson Hole, Wyoming, where the focus will be on the labor market. Until the economy burns through this excess capacity, employers have little incentive to give raises to attract and maintain employees.
Recoveries in the past exhausted that supply far faster than the current rebound, generating broad-based compensation increases that outpaced the speed of inflation and encouraged consumers to spend. If the economy had followed the historical relationship between joblessness and earnings, real wages would have been 3.6 percentage points higher by mid-2014, given how much unemployment has declined, according to a Chicago Fed study released last week.

The jobless rate was 6.2 percent in July, down from a post-recession high of 10 percent in October 2009.
“We’re sort of in uncharted territory,” said Guy Berger, a U.S. economist at RBS Securities Inc. “This isn’t fully behaving like prior cycles.”

The abnormality reflects the depth of the 18-month contraction. It displaced millions of Americans who, even with a recent pickup in hiring, still are making their way back to gainful employment. The lack of wage increases also helps explain why U.S. consumers don’t seem to be on stronger footing this far into the expansion.
The National Association of Realtors projects a 3 percent decline in purchases of existing homes this year to about 4.9 million from 5.1 million in 2013, while retail sales stalled last month.

“The scope for improvement is limited,” Berger said. “But real wage growth could make a difference. If we go up a percentage point from where we are now” in inflation-adjusted wage gains, “that allows consumer spending to accelerate as well.”
Lackluster pay has contributed to headaches for President Barack Obama and fellow Democrats, with fewer than three months left until the midterm elections. In daily Gallup tracking polls taken from Aug. 12 through Aug. 14, 51 percent of respondents disapproved of how he has handled the presidency, compared with 42 percent who approved. That pattern has persisted for more than a year.
Respondents in a Pew Research Center survey conducted July 8-14 were even less positive about his handling of the economy, with 56 percent saying they disapprove compared with 40 percent who approve.

“Right or wrong, the president gets credit and blame for what’s going on,” said Ethan Harris, co-head of global economics research at Bank of America Corp. in New York. “The fact that people just don’t feel good about the economy is partly due to the lack of job growth, partly due to the lack of wage growth.”
Yellen referenced this in July 15 testimony before the Senate Banking Committee, saying the recovery still isn’t complete and the “slow pace of growth” in measures of hourly compensation are a sign of “significant slack” in labor markets.
This slack is one reason the Fed has kept its benchmark federal funds rate near zero; the last time policy makers raised the rate on overnight loans among banks was 2006.
The risk of leaving the rate so low for too long is that the economy may overheat. While inflation still tracks below the Fed’s 2 percent target -- and the yield on 10-year Treasuries was 2.39 percentyesterday, compared with 3.94 percent on Nov. 30, 2007, just before the recession began -- prices are starting to accelerate. The personal consumption expenditures price index, the Fed’s preferred gauge, increased 1.6 percent in June from a year earlier, compared with an annual pace of 0.9 percent in October.

“We are facing a problem of rising inflation,” Martin Feldstein, a former chairman of the White House Council of Economic Advisers, said June 4 in a “Bloomberg Surveillance” interview. “They’re probably going to respond too weakly, too slowly.”
Yellen’s counter: Nominal average hourly pay, which increased about 2 percent in June from a year earlier, is still about half the 3 percent to 4 percent pace she has said she considers “normal.”
“There is some room there for faster growth in wages and for real wage gains before we need to worry” about this “creating overall inflationary pressure for the economy,” she told the Senate committee July 15.
So for now, Dartmouth’s Blanchflower will keep waiting for the jump in inflation hawks have been forecasting for years.
“We’ll worry about it when we see it,” he said.
Postado por Pedro Erik Carneiro às 07:07