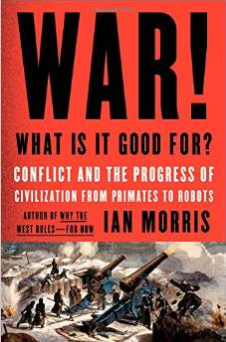 The debate over how to think about Islamic State has mainly centered on important but abstruse questions -- is it evil or not? -- and on what combination of military and economic pressure might be necessary to prevent the establishment of a caliphate.
What the debate is lacking is a sense of history. And the historical antecedents do supply an early analogy to Islamic State -- a warrior people who came out of nowhere, defeated mightier forces in battle, accumulated wealth and, in their bloody ferocity, terrified every civilization with which they came into contact.
I refer to the steppe nomads.
The steppe nomads were fearsome horsemen of varying ethnicity who first encountered the great empires of antiquity around 700 B.C., and reappeared with regularity well into the Middle Ages. They lacked the sophisticated technology, wealth and professional bureaucracy of the great powers like Rome and China. Instead they had horses. Cavalry was something new, and the traditional empires had difficulty adjusting to the tactics of the unanticipated invaders, who although loosely organized slowly conquered vast swaths of territory.
...
The story of the battle against the steppe nomads is powerfully told in Ian Morris’s excellent if controversial book, "War! What Is It Good For?" Morris, a historian and archeologist at Stanford, argues that there are two kinds of wars: productive wars that bring about greater prosperity and safety, and unproductive ones that are destructive to both. The wars with the steppe nomads were mostly unproductive. And although the territorial empires ultimately prevailed, the wars against the nomads were long and enormously costly.
By the 13th century, when Mongols under Genghis Khan successfully invaded what is now Iran, the technological sophistication of the steppe nomads had advanced considerably. Khan “employed a permanent corps of Chinese engineers,” writes Morris, and the engineers in turn forced prisoners to “dig tunnels; divert rivers; build catapults, rams, and towers; and rain burning gunpowder onto defenders." The Mongols’ use of technology helped them take Baghdad, “Islam’s richest city,” in 1258. A few years later, following a lengthy siege, the Mongols conquered Xiangyang in central China, “possibly the greatest fortress on earth.”
All of this was possible because the Mongols -- who began as classic mounted steppe warriors -- were far-sighted enough to see the advantage of using their accumulated wealth to hire the experts they needed to defeat the cultures of the West.
The Huns, another fearsome nomadic people, had earlier learned the same lesson. For the Hunnic Empire, writes the historian Peter Heather in "Empire and Barbarians," the “path to political triumph” was to take charge “of distributing the combined profits flowing from a potent mixture of raiding, mercenary service, and diplomatic subsidy.”
...
Islamic State has also captured a lot of sophisticated military hardware from the Iraqi army. Many experts are skeptical about the group’s ability to maintain or even learn how to use the equipment. Perhaps. But Islamic State doesn’t necessarily need to do maintenance and training on its own; it need only spend some of its wealth to hire outside experts interested in making a buck. It worked for the steppe warriors for centuries. There is no reason to think it wouldn’t work for Islamic State.
The steppe warriors lost in the end, of course. It cost the traditional empires of Europe and Asia dearly in blood and treasure, but they won. How? Morris lists several reasons, and all of them have relevance to the current threat of Islamic State.
Advancing technology -- particularly the discovery of military uses for gunpowder -- helped turn the tide of battle. So did constant and often massive attacks on the nomad territory, as well as simple bribery. Most important, perhaps, was a change in attitude. Not until they finally accepted their enemy for what it was, not a crowd of mindless barbarians but a powerful military and economic force that had to be fought with all the weapons and wealth at their command, did the great empires of history defeat the warriors of the steppes.
Postado por Pedro Erik Carneiro às 07:33