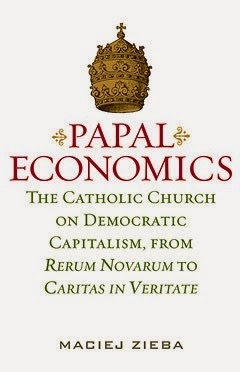 Everybody is interested in economics, for the simple reason that the state of the economy has an important effect not only on individuals but also on the basic building block of society, the family. Even Joseph and Mary must have noticed if the shekel lost value or the crops were not distributed fairly by the Romans, making it more difficult to feed and clothe their special Child.


The Catholic Church, too, is concerned with the whole human person, including not only the faithful’s salvation, but also their earthly well-being — and the state of the economy plays its part in that well-being. Even the early Fathers of the Church preached on the proper use of earthly goods, and in the Middle Ages, the theologian, St. Thomas Aquinas, also wrote about the economy and the serious sin of debasing the currency (what we call inflation).

The title of this book says it all. Father Maciej Zieba, who was close to the soon-to-be canonized John Paul II, has written perhaps the most condensed explanation of the Church’s teaching on economics, covering all the papal social encyclicals, from Pope Leo XIII’s Rerum Novarum in 1891 up to and including Pope Benedict XVI’s Caritas in Veritate in 2009. However, Father Zieba focuses primarily on Centesimus Annus in this book, explaining:

"Centesimus Annus provides the most comprehensive answer to a deceptively challenging question: What is the Church’s position on democratic capitalism? For decades the Catholic commentators of all stripes have tried to enlist Catholic social teaching in their cause, arguing that it is variously pro-left-wing or right-wing or pro-socialist or pro-capitalist. This book aims to correct the misconceptions about the Church’s teaching on economics. Although the teaching evolved in certain important respects over more than a century, the social encyclicals display a continuity many observers have missed. As early as Rerum Novarum in the nineteenth century, popes rejected socialism as wrong in its core."

He goes on to write, "It is clear that a democratic state characterized by the rule of law and endowed by a market economy in which human freedom can find expression deserves praise and respect."

I direct the reader particularly to Chapter Four, on "The Primacy of Culture," which was at the heart of John Paul’s hope for humanity. As he put it:

"All human activity takes place within a culture and interacts with culture. For an adequate formation of culture, the involvement of the whole man is required, whereby he exercises his creativity, intelligence and knowledge of the world and of people. Furthermore, he displays his capacity for self-control, personal sacrifice, solidarity and readiness to promote the common good."

This book is an invaluable tool for anyone who values religious liberty and a healthy culture for the family.