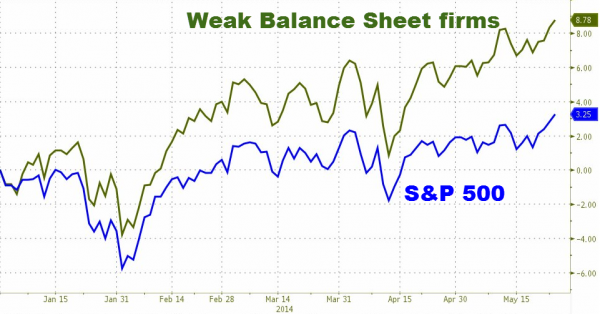 In the U.S. equity market, the worse a company’s finances, the better it’s doing.
Stocks with the weakest balance sheets have climbed more than 8 percent in 2014 and 94 percent since the end of 2011, generating almost twice the gain in the Standard & Poor’s 500 Index (SPX)over that period, according to data compiled by Bloomberg and Goldman Sachs Group Inc. Shares in the category this year are beating those that most investors consider the bull market’s leaders, such as small caps and biotechnology, which tumbled in March.
Gains are being sustained by speculation that the corporations whose finances put them most at risk will thrive as the economy improves. Helped by rising bond issuance and falling defaults, stocks from Tenet Healthcare Corp. to Frontier Communications Corp. are advancing even as Federal Reserve policy makers take steps to end unprecedented economic stimulus.
Weaker Finances
A basket of 50 companies that rank lowest in measures comparing equity to total liabilities and earnings to assets, compiled in a gauge known as the Altman Z-Score, has increased 8.3 percent in 2014 after climbing 50 percent last year. The highest-rated group is up 3 percent since December after rallying 28 percent in 2013, according to data compiled by Goldman Sachs.
Shares with weaker finances have benefited as the Federal Reserve held interest rates near zero for the past six years and bought $3.6 trillion of bonds to stimulate the economy, spurring an unprecedented wave of debt financing. Companies in the S&P 500 that issued junk bonds -- securities deemed the riskiest by credit raters -- in the past year have seen their stocks climb 26 percent over that period, according to data compiled by Bloomberg. That compares with a one-year increase of 15 percent for the full S&P 500, which closed at a record on May 23.