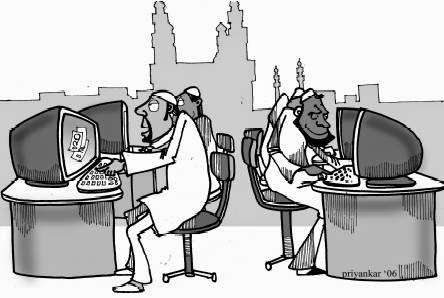 
Can you imagine opening the financial pages of your local news website and reading about the latest financial news from the Islamic State of Iraq and the Levant? Well, if ISIL is to be believed, that is exactly what the group envisages happening.
Reports that the group has opened its first bank in the Iraqi city of Mosul and ‎delivered a budget for the territory that it controls are difficult to confirm, but a Mosul religious leader speaking to Al-Araby Al Jadeedwebsite says that is exactly what they have done. And it shouldn't surprise you.
ISIL is desperate to move beyond its image of a terrorist organisation and consolidate its aim of becoming a legitimate state. ‎The budget is reportedly around $2bn with a $250m surplus. It includes salaries for its fighters and the kinds of civil services it provides in territories in Iraq and Syria: things like construction, waste management and education.
It seems that the group's thinking is to act like a nation state to become a nation state.
For Mahjoob Zweiri, a professor of Middle Eastern History at Qatar University,  history may provide a reason for ISIL's budget.
"Look at Afghanistan and the Taliban government there. They made similar moves, issuing budgets which helped legitimise them. Of course, Afghanistan was a recognised state with borders. ISIL doesn't have those borders and the state is split between Iraq and Syria," he said.
"However we can say that with this and other actions, including the propaganda videos that they release, a strategy to make concrete decisions and actions to create a nation state is in place."
Crucial comparision
The comparison with the Afghan Taliban is crucial. Both Pakistan and Saudi Arabia had recognised that government and set up consulates ‎for the group in both countries. Pakistan and the Saudis had provided assistance to the Taliban government which helped the group gain legitimacy, albeit limited, internationally.
But it is unclear who is advising ISIL. What we do know is that it has an advisory board known as the Shura Council and all decisions regarding ISIL are taken using that mechanism.
Unlike the Taliban, ISIL has one crucial advantage: they have money from captured oilfields, and revenue from the cities which they control and are able to deliver a budget.
The message, according to Professor Zweiri, seems to be clear: "I think ISIL is developing a message to sympathisers outside of Iraq and Syria. That it can provide jobs and lives for people wishing to move to the terroritories it controls and that's always been an ISIL aim, to get Muslims to move to the Islamic State. What must be questioned is whether they have the knowledge and ability to deliver what they have promised."
Clearly absolute legitimacy may well be impossible, but the group ambitions have never been small scale.