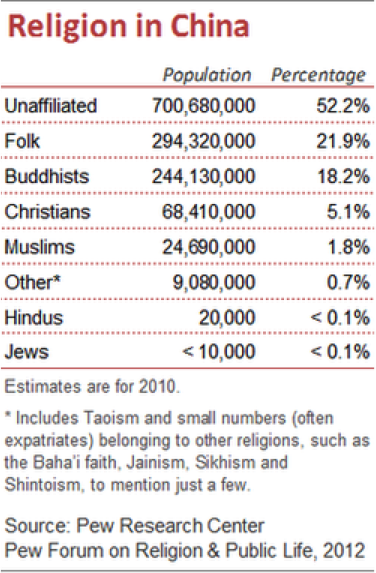 Para mim, qualquer explicação sobre o sucesso econômico dos Estados Unidos deve começar com a primeira frase do segundo parágrafo da Declaração de Independência do país: We hold these truths to be self-evident, that all men are created equal, that they are endowed by their Creator with certain unalienable Rights.


Wang and Lin find that Christianity boosts China’s economic growth. Specifically, they find that robust growth occurs in areas of China where Christian congregations and institutions are prevalent.
Using provincial data from 2001 to 2011, Wang and Lin investigated the effect of religious beliefs on economic growth. Among the different religions analyzed, they found that Christianity has the most significant effect on economic growth.
Why might that be? Wang and Lin note that Christian congregations and institutions account for 16.8 percent of all religious institutions, more than three times larger than the share of Christians in the general population (about 5 percent).
Such institutions elsewhere tend to stimulate economic growth for individuals and communities, according to studies led Prof. Ram Cnann of the University of Pennsylvania. There’s no reason to believe that they don’t have the same effect in China.
The economic benefits of religious institutions include direct spending for goods, services and salaries, as well as a broader “halo effect.” This includes the real but often unmeasured benefits of religious congregations, such as the safety net and networks provided to individuals, the magnet effect of attracting everything from lectures to weddings, and valuable public spaces that provide communities with centers of cultural, ethical, spiritual and even recreational value.
Wang and Lin argue that Chinese Christianity’s social doctrines may also have economic impact. They suggest that Christian ethics emphasize the overall development of human beings, not just economic development. For instance, they observe that the Christian obligation to be accountable to God and their fellow believers tends to result in legal and rational investment behavior rather than illicit or wild speculation.
It may be that the impact of Christianity identified by Wang and Lin might even reinforce the economic impact of Confucianism identified by Zhao. In a public dialogue at Peking University in November 2010, world-renowned Confucian scholar, Tu Weimin of Harvard, and Christian theologian, Jürgen Moltmann of the University of Tübingen, found commonalities between Confucianism and Christianity. For instance, Confucius’s famous silver rule, “Do not do to others what you don’t want to be done to you,” is a pragmatic mirror image of Jesus’s more demanding golden rule, “Do to others whatever you would have them do to you.”
Wang and Lin also note positive, though inconsistent economic effects from China’s other major faiths, including Buddhism, Islam and Taoism. (Confucianism wasn’t included in their study, and is not counted as an official religion by the government.)
Wang and Lin conclude that the implication is not for the country to favor one faith above another, but to “build a better-informed economics, and in the long run, better policy.”
One clear implication is that the government policy of highly restricting religion, including allowinglocal government officials to destroy and deface churches in Wenzhou—often called China’s Jerusalem—must be reconsidered. Such restrictive policies may undermine an important source of China’s economic success. Just as China has radically deregulated its economy with successful outcomes, further deregulation of religion would be one way to keep China’s economic miracle alive for decades to come.
Brian J. Grim is founder and president of the Religious Freedom & Business Foundation, as well as an affiliated scholar at Georgetown and Boston Universities, and a member of the World Economic Forum’s global agenda council on the role of faith.
Postado por Pedro Erik Carneiro às 17:11