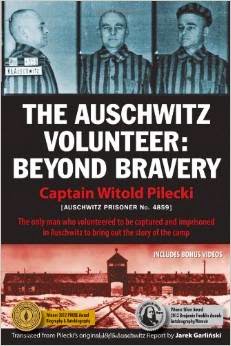 
Aqui vai apenas parte do texto, leiam todo no site do The Atlantic.

The Man Who Volunteered for Auschwitz

WARSAW -- There are very few places that can accurately be described as hell on Earth. One of these is the Auschwitz concentration camp during World War II, where as many as 1.5 million people died during the five years the camp was in operation.
The Polish resistance had been hearing horrific first- or second-hand accounts about the conditions inside Auschwitz. These early accounts came primarily from released prisoners, but also from casual observers like railway employees and residents of the nearby village of Oswiecim. The resistance decided they needed someone on the inside.
It is into this environment that Witold Pilecki, a 39-year old veteran of the Polish-Soviet War of 1919-1921 who fought against the initial Nazi invasion and a member of the Polish resistance, volunteered himself in 1940. Pilecki's mission was to allow himself to be arrested and, once inside Auschwitz, to collect intelligence for the Polish resistance in the country and the government-in-exile in London, and to organize a resistance from inside the camp.
"I think he knew, he realized what he was getting himself into," said Jacek Pawlowicz, a historian at Poland's Institute of National Remembrance. "But even so, he was not prepared for the things he was actually able to witness."
During the next three years, Pilecki was involved in one of the most dangerous intelligence-gathering and resistance operations of the war. He authored three reports about life inside the camp for the Polish resistance. During his incarceration, Pilecki witnessed from the inside Auschwitz's transformation from a detention facility for political prisoners and Soviet soldiers into one of the Nazis' deadliest killing machines.
An English translation of Pilecki's third and most comprehensive report -- a primary source for this article -- was recently published as a book titled The Auschwitz Volunteer: Beyond Bravery . It is a fascinating first-hand account of virtually all aspects of life inside the camp. The original document is in the custody of the Polish Underground Movement Study Trust in London.
"He was there in all of Auschwitz's worst periods, because he arrived at the moment when the camp was being created and was there until [1943]," Pawlowicz explained. "So while there he saw the camp growing, he saw [Birkenau] being built -- where the ovens were. But the ovens were not only in [Birkenau], there were gas chambers and crematoria on the territory of Auschwitz I."
Pilecki's family was kept out of the loop regarding his activities for security reasons. His son Andrzej Pilecki recalls, "There was secrecy because of the danger, so that the children would know as little as possible. But I felt something. My father was in Warsaw. We were 100 kilometers away. We came to visit him sometimes and my father would teach us how to behave during the occupation."
Pilecki began preparations for his mission in the late summer of 1940. While staying at a safehouse, he found identity papers belonging to a man named Tomasz Serafinski, who was erroneously presumed killed in September of 1939. Because the Nazis asked for the names and addresses of inmates and their relatives as a method to keep the population under control, Pilecki wisely decided not to give his real name or those of his immediate family. Pilecki placed his photograph on Serafinski's papers and memorized his details. His plan was to be arrested and booked under the Serafinski alias.As he was saying goodbye to Ostrowska, he quietly whispered to her, "Report that I have fulfilled the order."

---
Continue lendo no The Atlantic.