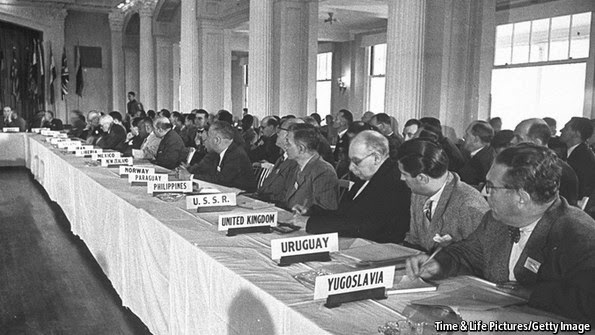 
The 70-year itch
... Despite some flaws, the Bretton Woods agreements, signed 70 years ago this month, helped usher in a long and relatively peaceful period of economic growth.

Yet today’s pre-eminent powers seem to have forgotten this lesson. America and Europe have failed to strengthen and reform the offspring of Bretton Woods, the IMF and the World Bank; they have been sluggish in providing a bigger role for China in these institutions (it still has less voting power than the Benelux countries). Meanwhile, China, like America a century ago, flexes its muscles close to home but outsources global leadership to others. The combination could lead to another dangerous, rudderless spell for the world economy.
...

China has taken the hint. Its interest in the World Bank and IMF, always half-hearted, is waning. Instead, China’s leaders are working to build a separate system. At a summit later this month the leaders of Brazil, Russia, India, China and South Africa are expected to agree to create a $50 billion “BRICS” development bank and consider a BRICS contingency fund modelled on the IMF. China also plans to create an Asian infrastructure bank that will rival the Asian Development Bank, a regional lender dominated by Japan.

Like the West’s regional trade deals, China’s institution-building looks benign in isolation. Why not invest in underdeveloped countries? Yet its flurry of initiatives, which conspicuously excludes rich countries, may signal a strategic shift. Rather than take more responsibility within the existing system, China seems to be creating a rival one.

Not seeing the Woods for the trees


If John Maynard Keynes were alive, he would sigh not just at the risks in all this economic nationalism but also the huge missed opportunity. Freer trade through multilateral deals would help the world economy and reduce the allure of mercantilist policies that invite retaliation. Or imagine what would happen if the West and China worked together to liberalise the latter’s capital account: China’s financial markets would become less distorted, while the emergence of the yuan as a global reserve currency would ease Western fears about their currencies’ overvaluation. Perhaps it is time to send another group of dignitaries to New Hampshire.