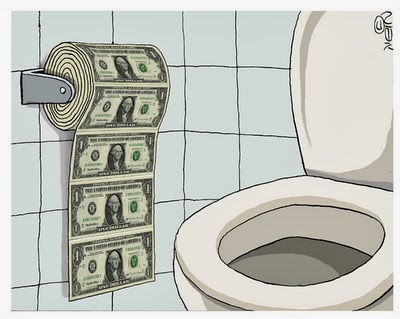 As China Orders Its Smaller Banks To Load Up On Cash, Is The Biggest Ever "Unlimited QE" About To Be Unleashed?

The Chinese new year may be over which following a last minute bailout of its insolvent Credit Equals Gold Trust product was largely uneventful, but already concerns about domestic liquidity are once again rising to the surface following reports that China’s banking regulator ordered some of the nation’s smaller lenders to set aside more funds to avoid a cash shortfall, which as Bloomberg notes signal rising concern that defaults may climb.
Specifically, "China Banking Regulatory Commission branches asked some city commercial banks and rural lenders to strengthen liquidity management this year, the people said, asking not to be named as the matter is confidential. Different requirements are being instituted by province, such as quarterly stress tests, after CBRC studies last year showed increasing risks at those lenders, the people said."
“Smaller banks are the weakest link of China’s financial system because their lack of a stable deposit base would force them to seek more expensive funding and offer more risky loans,” said Liu Jun, a Wuhan-based analyst at Changjiang Securities Co. “They will be hardest hit when borrowing costs are elevated and the economy slows.”
The CBRC action was to be expected in the aftermath of news throughout last year, confirming that China's bad debt demons will soon be in need of a violent exorcism: "The requirements add to steps taken to protect against soured loans weighing on China’s economy, which included speeding up bad-loan writeoffs and limiting local government debt sales."
Recall that as we reported previously in Big Trouble In Massive China, total losses from bad debt discharges could rise to a mind-boggling $3 trillion which would once and for all settle any debate about just how hard or soft China's "landing" (or is that lending?) would be: "The nation might face credit losses of as much as $3 trillion as defaults ensue from the expansion of the past four years, particularly by non-bank lenders such as trusts, exceeding that seen prior to other credit crises, Goldman Sachs Group Inc. estimated in August."
It has gotten so bad that even China has started releasing official data confirming a very disturbing trendline -one of soaring NPLs at China listed banks.

Obviously, the numbers indicated in the chart above are merely a fraction of the real state of bad loans permeating the country's financial system. One needs to merely look at the ridiculous amount of total corporate debt as a % of GDP in China - highest in the entire world - to know that this particular fable will not have a happy ending:

Which is why China is rushing to proactively prepare the system to have buffers in advance of what may be a worst case scenario:


Some of the banks were asked by their local CBRC branches to set aside reserves to ensure cash supply for 30- to 45-day periods, the people said, declining to identify the names of the banks. Press officers at the CBRC’s headquarters in Beijing didn’t return three calls seeking comment.

China’s money markets are playing a greater role in credit allocation and borrowing costs as the central bank has moved to liberalize interest rates and make the economy less reliant on banks for funding. The PBOC abolished controls on bank lending rates in July and the Communist Party said in November it wanted markets to play a “decisive” role in pricing capital.

“When the valve of liquidity starts to tame and curb excessive credit expansion, money-market rates, or the cost of liquidity, will reflect that,” the central bank said in a Feb. 8 report. “The market needs to tolerate reasonable rate changes so that rates can be effective in allocating resources and modifying the behavior of market players.”

One or two small Chinese banks may fail this year as they get about 80 percent of their funding from interbank markets and higher-cost deposits in savings vehicles known as wealth management products, Fang Xinghai, a bureau director at the Office of the Central Leading Group for Financial and Economic Affairs, said in November. The group is the highest-level agency within the Communist Party for financial and economic policies.


Of course, the real panic will commence once the financial turmoiling shifts from the small banks to the big ones: "China’s five biggest state-owned banks and 12 national lenders controlled more than 60 percent of the nation’s 148 trillion yuan of banking assets at the end of 2013, according to CBRC data. Other financial institutions including 144 city commercial lenders, 337 rural banks and more than 1,900 rural cooperatives owned the rest."
Talk about "Too Big To Fail."
Incidentally, the topic of China's inevitable financial crisis, and the open question of how it will subsequently bail out its banks is quite pertinent in a world in which Moral Hazard is the only play left. Conveniently, in his latest letter to clients, 13D's Kiril Sokoloff has this to say:


Will the PBOC’s Short-term Lending Facility (SLF) evolve into China’s version of QE? While investor attention has been fixated on China’s deteriorating PMI reports and fears of a widening credit crisis, China’s central bank is operating behind the scenes to prevent a wide-scale financial panic. On Monday, January 20th, 2014, when the Shanghai Composite Index (SHCOMP, CNY 2,033) fell below 2,000 on its way to a six-month low and interest rates jumped, the central bank intervened by adding over 255 billion yuan ($42 billion) to the financial system. In addition to a regular 75 billion yuan of 7-day reverse repos, the central bank  provided supplemental liquidity amounting to 180 billion yuan of 21-day reverse repos, which was seen as an obvious attempt to alleviate liquidity shortages during the Chinese New Year. However, it is worth noting that this was the PBOC’s first use of 21-day contracts since 2005, according to Bloomberg. Small and medium-sized banks were major beneficiaries of this SLF, as the PBOC allowed such institutions in ten provinces to tap its SLF for the first time on a trial basis. A 120 billion yuan quota has been set aside for the trial SLF, according to two local traders.

The central bank also said it will inject further cash into the banking system at regularly-scheduled open market operations. This is a very rare occurrence, as it is almost unprecedented for the central bank to openly declare its intention to inject or withdraw funds at regularly-scheduled open market operations. Usually, these operations only come to light after the fact.

The second key reason is embodied in the following central bank announcement: “[we will] explore the function of the SLF in setting the upper band of the market interest rates.” In other words, in the event that interest rates spike higher due to a systemic crisis, the central bank can intervene, via the SLF, to bring rates back down if it so desires. In addition, the PBOC did not disclose any set cap on the SLF, implying that unlimited liquidity could be provided as long as the market’s rate spike exceeds the bands set by the PBOC.

Most important, the SLF appears to represent the PBOC’s strategy to avert China’s widely-publicized local government debt and banking-system problems. It is  worth noting that even though local government debt amounts to 30% of GDP and is growing at an alarming rate, China’s central government is relatively underleveraged, with a debt-to-GDP ratio of only 23%, which is significantly lower than the emerging-market average. Therefore, Beijing has considerable unused borrowing capacity to share some of the debt burden taken on by local governments, which would have the additional positive impact of lowering borrowing costs for those governments.


In other words, the PBOC is laying the groundwork for what developed markets would call an open-ended liquidity injection which can be use to bail out one and all banks on an a la carte basis. Or, in the parlance of our times, the biggest QE bazooka of all because with total banking assets of nearly $25 trillion, said bazooka better be ready to fire at a moment's notice.

The only question is when will the market force China's central planners to demonstrate that unlike Paulson's bazooks, the one in Beijing is not a dud...