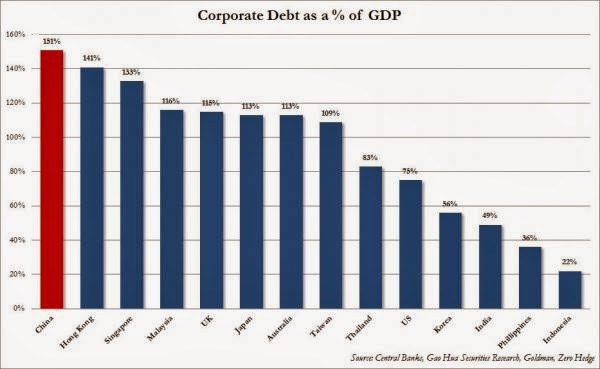 Chinese non-financial companies held total outstanding bank borrowing and bond debt of about $12 trillion at the end of last year - equal to over 120 percent of GDP - according to Standard & Poor's estimates.
Growth in Chinese company debt has been unprecedented.

While a credit crisis isn't expected anytime soon, analysts say companies in China's most leveraged sectors, such as machinery, shipping, construction and steel, are selling assets and undertaking mergers to avoid defaulting on their borrowings.

More defaults are expected, said Christopher Lee, managing director for Greater China corporates at Standard and Poor's Rating Services in Hong Kong. "Borrowing costs already are going up due to tightened liquidity," he said. "There will be a greater differentiation and discrimination of risk and lending going forward."

China rarely allows corporate failures, particularly of state-backed companies, partly out of fear that widespread layoffs could lead to social unrest. In cases where firms have effectively gone bankrupt, domestic bondholders tend to be paid off ahead of other debtors.

The Sichuan-based firm, which expects to report a 2013 loss of 3.15 billion yuan ($516.5 million) and may see its shares suspended, held debt of 11.4 billion yuan in September, according to stock market filings.
In July, China's State-Owned Assets Supervision and Administration Commission ordered China Erzhong, together with its parent company, to merge with China National Machinery Industry Corp, another Beijing-controlled enterprise group.

A management reshuffle followed, while a proposed 1.9 billion yuan asset sale was cancelled. Accumulated losses may drive up the cost of the company's loans, Huang said, should banks cut the company's ratings.
"Tight credit growth and higher borrowing costs will make it a tough year," said Stephen Green, head of China research at Standard Chartered Bank.

ASSET SALES
China's massive holding companies, power producers and construction materials firms are among the most highly levered in the world's second-largest economy, with each sector reporting twice as much debt as equity at end-September, Thomson Reuters data show.

The dry bulk goods shipper, which is in bankruptcy restructuring, has been sued for loan repayment by five banks, including China Merchants Bank Co (600036.SS) and China Minsheng Banking Corp (600016.SS). It also faces lawsuits by the leasing arm of the Industrial and Commercial Bank of China (601398.SS) and China Petroleum and Chemical Corp (600028.SS) for unpaid bills.

Other state-backed firms, including China Cosco Holdings (601919.SS) (1919.HK) and Angang Steel (000898.SZ) (0347.HK), have returned to nominal profitability by turning to their corporate parents to sell assets.

OVER-INVESTED?
Exacerbating China's corporate troubles has been the questionable use of 4 trillion yuan in stimulus that Beijing pumped into the economy following the onset of the global financial crisis in 2008, explained Lee of Standard & Poor's.

"Many companies invested heavily into competitive and low-return projects because funding was readily available," he said. "These investments aren't doing well and are making little contribution to profitability."

Although leverage at China's mid-sized and large companies started to decline in the second half of last year, building down debt positions will be difficult, said Merrill Lynch analyst David Cui. "The beast grew so fast you can't control it easily now. A sense of urgency will develop only if there is significant disturbance to the financial system."

China's bonds, which in the past behaved more like pure interest rate products, have started to price in credit risk, with the coupon gap between AA and AAA-rated companies for 5-year bonds doubling in recent weeks.