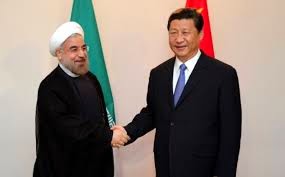 There is no trace of Shenzhen Lanhao Days Electronic Technology Co Ltd at its listed address in the beige and pink-tiled "Fragrant Villa" apartment complex in this southern Chinese city. The building's managers say they’ve never heard of it.

But a Western intelligence report reviewed by Reuters says Shenzhen Lanhao is one of several companies in China that receives money from Iran through a Chinese bank. Such transfers help to finance international operations of the Islamic Revolutionary Guards Corps' elite Quds Force, the report said.

The Quds provides arms, aid and training for pro-Iranian militant groups in the Middle East, such as Hezbollah, Hamas and Shi'ite Muslim militias in Iraq. They have also armed and trained government forces in Syria's civil war in violation of a U.N. arms embargo, U.S. and European officials say.

Washington designated the Quds a supporter of terrorism in 2007. The European Union sanctioned them in 2011.

The report said that the Central Bank of Iran (CBI) holds accounts with the Bank of Kunlun Co Ltd, a China National Petroleum Corp unit. Quds-controlled Iranian companies, including one called Bamdad Capital Development Co, initiate transfers from these accounts to either Chinese entities directly controlled by the Quds or to Chinese entities owed money by the Quds, such as Shenzhen Lanhao.

"The money transfers from accounts held by the CBI with Bank Kunlun are initiated by the Quds Force and transferred to Chinese companies connected to the Quds Force in order to meet its financial needs," the seven-page report said. Reuters could not independently verify the claims in the report.

The suspected movement of Iranian funds linked to the Quds Force through a Chinese bank and Chinese companies is a reminder of the difficulty of enforcing sanctions on Iran at a time when the United States and other world powers hope to clinch a nuclear deal with Tehran by Nov. 24.

The exact amount of money the Quds could have received from the Kunlun channel is unclear. But the sums flowing from the Iranian central bank to Kunlun over the past year have been in the hundreds of millions of dollars, the report said.

As Western sanctions tightened on Iran in 2012, Beijing picked Kunlun as its main bank to process billions of dollars in oil payments to Iran, shielding other banks from penalties. Kunlun had assets of 246.5 billion yuan ($40 billion) at the end of 2013, according to its annual report.

Officials at Kunlun did not respond to Reuters requests for comment, nor did CNPC, China's biggest oil and gas company.

The Chinese government said China's trade relations with Iran and other countries do not violate international laws.

"China maintains normal trade relations with relevant countries, including Iran," Foreign Ministry spokesman Hong Lei said in a statement in response to queries from Reuters. "This does not violate any international law or (U.N.) Security Council resolution, and does not harm the interests of other countries or the international community."

Reuters viewed a payment transfer order from 2014 showing Bamdad requesting Iran's central bank transfer 1.45 million euros ($1.81 million) from an account at Kunlun to Shenzhen Lanhao for a payment "related to purchasing metals." While it was unclear how and whether the Quds Force received any funds through the transaction, it appeared to show the movement of funds as described in the report