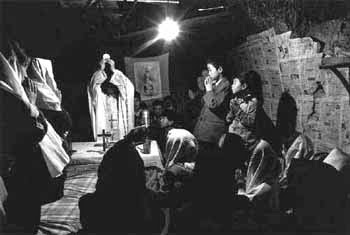 Though the Chinese Communist Party is the largest explicitly atheist organization in the world, with 85 million official members, it is now overshadowed by an estimated 100 million Christians in China. It is no wonder Beijing is nervous and authorities are cracking down on Christian groups.

Christianity is growing so fast in China that some predict that it will be the most Christian nation in the world in only another 15 years. By far, the greatest growth is coming outside the official state-sanctioned churches, which are rightly considered subservient to the Communist Party. Numbers are increasing, rather, in unofficial Protestant “house churches” and in the underground Catholic church.
“By my calculations China is destined to become the largest Christian country in the world very soon,” said Fenggang Yang, a professor of sociology at Purdue University and author of Religion in China: Survival and Revival under Communist Rule.
Although at least on paper the People’s Republic of China recognizes freedom of religion since 1978, party members are explicitly forbidden to believe in any religion. In 2011, Zhu Weiqun, executive vice minister of the United Front Work Department, wrote, “Party members shall not believe in religion, which is a principle to be unswervingly adhered to.”
According to the annual report of the human rights group China Aid, persecution of Christians worsened dramatically in 2013, in line with a constant trend of deteriorating religious freedom over the past eight years. Most recently, the oppression of Christians has especially targeted Protestant groups, leaving most Catholics alone, which many feel reflects Beijing’s strategic goal of reestablishing diplomatic relations with the Vatican. According to reports, hundreds of Protestant churches in the eastern province of Zhejiang have been targeted for demolition in the past year.
Unrecognized Christian groups have been subject to crackdowns for years, but observers say the atmosphere is getting worse as their numbers increase and the governing Communist Party takes a more nationalist tone under President Xi Jinping.
Particularly hard hit has been a Beijing Christian group called Shouwang. “Things have got worse this year because the police started to detain us. I was detained for a week,” said Zhao Sheng, 54, musical organizer for the group’s Christmas service.
“But Christmas is still a happy time. No matter what happens, God is with us,” he added with a smile.
Follow Thomas D. Williams on Twitter @tdwilliamsrome.
Postado por Pedro Erik Carneiro às 17:29