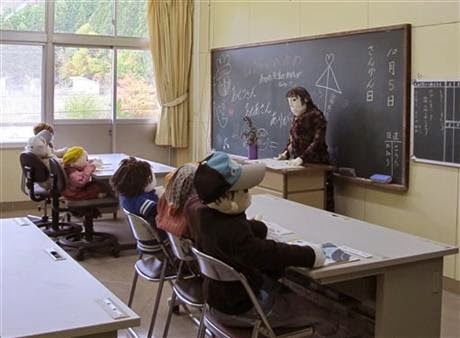 By ELAINE KURTENBACH
NAGORO, Japan (AP) — This village deep in the rugged mountains of southern Japan once was home to hundreds of families. Now, only 35 people remain, outnumbered three-to-one by scarecrows that Tsukimi Ayano crafted to help fill the days and replace neighbors who died or moved away.
At 65, Ayano is one of the younger residents of Nagoro. She moved back from Osaka to look after her 85-year-old father after decades away.
"They bring back memories," Ayano said of the life-sized dolls crowded into corners of her farmhouse home, perched on fences and trees, huddled side-by-side at a produce stall, the bus stop, anywhere a living person might stop to take a rest.
"That old lady used to come and chat and drink tea. That old man used to love to drink sake and tell stories. It reminds me of the old times, when they were still alive and well," she said.
Even more than its fading status as an export superpower, Japan's dwindling population may be its biggest challenge. More than 10,000 towns and villages in Japan are depopulated, the homes and infrastructure crumbling as the countryside empties thanks to the falling birthrate and rapid aging.
In Japan's northeast, the massive earthquake and tsunami that struck in March 2011, killing more than 18,000 people, merely hastened along the decline.
First the jobs go. Then the schools. Eventually, the electricity meters stop.
Neither Prime Minister Shinzo Abe's ruling Liberal Democratic Party nor any of its rivals have figured out how to "revive localities," an urgent issue that has perplexed Japanese leaders for decades.
But some communities are trying various strategies for attracting younger residents, slowing if not reversing their decline. In Kamiyama, another farming community closer to the regional capital of Tokushima, community organizers have mapped out a strategy for attracting artists and high-tech companies.
Nagoro is more typical of the thousands of communities that are turning into ghost towns or at best, open-air museums, frozen in time — a trend evident even in downtown Tokyo and in nearly or completely empty villages in the city's suburbs.
The one-street town is mostly abandoned, its shops and homes permanently shuttered.
The closure of the local elementary school two years ago was the last straw. Ayano unlocks the door and guides visitors through spotless classrooms populated with scarecrow students and teachers.
When she returned to her hometown 13 years ago, Ayano tried farming. Thinking her radish seeds may have been eaten by crows, she decided to make some scarecrows. By now there are more 100 scattered around Nagoro and other towns in Shikoku.
Like handcarved Buddhist sculptures, each has its own whimsical expression. Some sleep, their eyelids permanently shut. Others cuddle toddler scarecrows, or man plows and hoes.
Ayano brings one along for company on her 90-minute drive to buy groceries in the nearest big town. But most remain behind, to be photographed and marveled at by tourists who detour through the winding mountain roads.
"If I hadn't made these scarecrows, people would just drive right by," said Ayano, who greets a steady stream of visitors who wander through the village.
The plight of Japan's countryside partly a consequence of the country's economic success. As the nation grew increasingly affluent after World War II, younger Japanese flooded into the cities to fill jobs in factories and service industries, leaving their elders to tend small farms.
Greater Tokyo, with more than 37 million people and Osaka-Kobe, with 11.5 million, account for nearly 40 percent of the country's 127 million people, with another 10 million scattered in a handful of provincial capitals.
"There's been this huge sucking sound as the countryside is emptied," said Joel Cohen, a professor at Columbia University's Laboratory of Populations.
Japan's population began to decline in 2010 from a peak of 128 million. Without a drastic increase in the birthrate or a loosening of the staunch Japanese resistance to immigration, it is forecast to fall to about 108 million by 2050 and to 87 million by 2060.
By then, four in 10 Japanese will be over 65 years old.
The government has a target of preventing the population from falling below 100 million, but efforts to convince Japanese women to have more babies have yielded meager results. Young Japanese continue to drift from the countryside into big cities such as Tokyo, where the birthrate is a mere 1.13 children, thanks to long working hours, high costs and killer commutes.
The population of Miyoshi, which is the town closest to Nagoro, fell from 45,340 in 1985 to about 27,000 last year. A quarter of its population is over 75 years old. To entice residents to have more children, the town began offering free nursery care for third children, free diapers and formula to age 2 and free health care through junior high school.